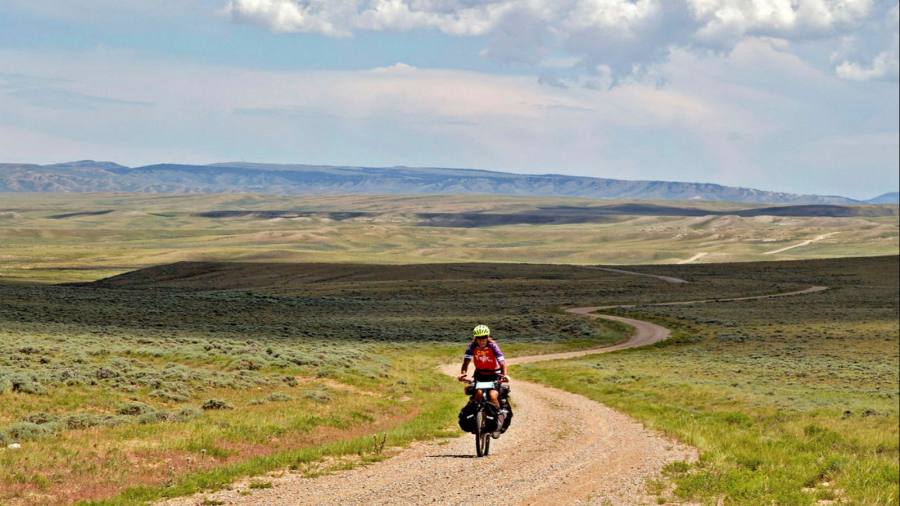 Perhaps the best known bikepacking route of all, the Great Divide Mountain Bike Route follows unpaved roads and trails for about 90 per cent of its 2,700 miles. It snakes its way down the continental divide of the Americas between Banff, Alberta, and the US-Mexico border at Antelope Wells, New Mexico. Although it’s not too technically difficult, it challenges riders with more than 200,000 feet of climbing and a wide variety of harsh environments. Expect to take at least a month to complete it.

The 600-mile Tian Shan Traverse is a physically demanding and culturally compelling route that crosses Kyrgyzstan via quiet tracks and trails, through rolling river valleys and up soaring mountain passes. The route starts near Karakol in the east of the country and ends in the capital, Bishkek. Our group took about 21 days to scout the route at a casual pace, staying at unforgettable campsites under big skies and spending ample time chatting with nomadic herders in their summer pastures.

Starting in the village of Tyndrum, at the northern edge of Loch Lomond and the Trossachs National Park, this 550-mile loop is one of the most visually impressive bikepacking routes in the world. It comprises single-track trails and dirt roads; riders should plan to take around 14 days to navigate the route at a comfortable pace, with plentiful opportunities for wild camping or nights in mountain bothies when the weather turns.

The two-part Caucasus Crossing route consists of an 800-mile segment across Georgia and a 430-mile segment that crosses Armenia to the Iranian border. Bikepackers taking on both will enjoy a meandering (and sometimes grueling) traverse of the Caucasus Mountains through awe-inspiring landscapes. Riders should plan for 21 days for the Georgian leg and 18 for the Armenian stretch.

More than six years into development, the forthcoming 5,900-mile Eastern Divide Trail will soon be open as one of the world’s longest off-road bikepacking routes. It will run from Cape Spear, Newfoundland (the easternmost point in North America), all the way to Key West, Florida. The route crosses dozens of national and state forests, an abundance of unique ecozones and countless places of geographical and historical significance. Expect to take three months to complete it.

Lucas Winzenburg is also an editor of Bikepacking.comfrom which more than 350 routes around the world, including those mentioned here, can be downloaded for free