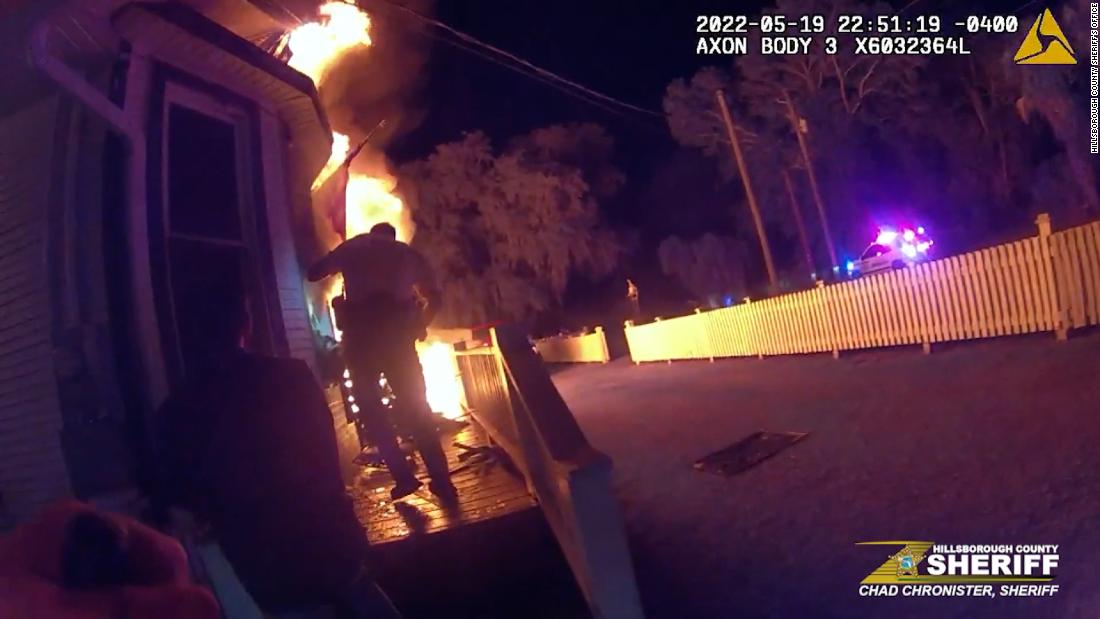 The Hillsborough County Sheriff’s deputies arrived shortly after 11 pm ET at a home engulfed in flames and were told there was a child still in the house, according to a news release from the Sheriff’s Office.

Footage from body-worn cameras shows Deputy Kevin Reich and Deputy Alexander Maldonado working for more than four minutes to rescue a boy named Owen, breaking two bedroom windows and attempting to coax him out by using their flashlights as smoke pours from the house.

The heroic deputies cough through thick smoke before Owen finally gets close enough to the window to be pulled to safety.

The deputies stayed with Owen until Hillsborough County Fire Rescue arrived and took Owen; his mother, Karen McGinnis; and her boyfriend to Tampa General Hospital, the release stated.

On Friday, McGinnis and Owen’s father, Chris Ares, told reporters the boy remains hospitalized with second-degree burns on his face and his right arm. McGinnis said Owen is “heavily sedated and very comfortable.”

McGinnis said if it was not for deputies, the conversation would be different.

“They [the deputies] put their necks on the line “not waiting for the fire department to arrive, she said. McGinnis said she had tried to break a window but was not able to do so.

Ares said the reason he and McGinnis decided to speak to the media was because “heroes need to be recognized.”

“It was not for them, my son would be dead. It was like within minutes he was gonna be … he would not have made it,” Ares said.

“All too often, we talk about the bad, and I feel like it’s very important that we talk about our heroes and the police are good and you know, they saved my son’s life and I’m so grateful,” he added.

Ares said the deputies described the intense heat of the fire and said taking a breath was hard.

“It was literally choking them, and yet they would go and they would choke and then catch their breath and come back and continue to search for him,” Ares added.

Hillsborough County Sheriff Chad Chronister said in a statement he could not be more proud of the deputies and said they never gave up.

“We must always be ready to jump in and help. These deputies never hesitated,” he added. “They are true examples of what it means to be a hero.”