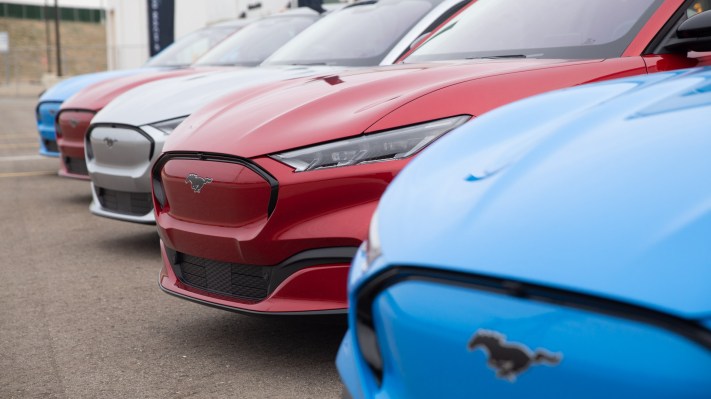 Ford today announced a significant restructuring to better focus on the different challenges and opportunities with electric vehicles and internal combustion engine (ICE) vehicles. The two units will operate under Ford’s existing corporate umbrella, and at this time, the company is not spinning out any units as rumors previously suggested. The two units are called Ford Blue and Ford Model e. Ford Blue will oversee existing and future ICE vehicles like the Mustang, F-150, and Bronco. Ford Model E will focus on connectivity and electric vehicles.

Ford Chief EV and Digital Systems Officer, Ford Model and Doug Field said, “This will be a really big change in the modernization of the way we’re going to do business.”

Under this change, the company raised its profitability projections and operating-profit margins. Ford expects, thanks in part to this restructuring, EVs to account for 50% of its global sales by 2030, up from 40% under previous guidance. The operating profit margin is expected to increase to 10% by 2026, up from 8%.

Ford says this new structure is designed to give the 118-year-old Michigan automaker the speed of a startup, with the deep expertise of a high-volume production company.

The Model e business unit is designed to more quickly develop and produce electric vehicles while having access to Ford’s vast engineering and manufacturing resources. The unit is also tasked with developing connected services for all parts of the Ford family, including Ford Pro, Ford Blue, and Lincoln.

Ford Blue is perhaps the more interesting of the two new units. Its existence shows Ford is trying to squeeze as much profitability out of its fossil fuel unit. And for a good reason. Currently, the automaker has one of the most dynamic and most sought-after lineups available from any automaker. The Ford Bronco is a blockbuster, and the ultra-low-cost Ford Maverick pickup is a surprise, sold-out hit. Likewise, two of America’s oldest nameplates – Mustang and F-150 – are market segment leaders and have not shown any signs of relinquishing the spot to competitors.

This news caused Ford stock to move lower, trading down nearly 5% in premarket action. The company stock had been sliding since record-high levels in January but is still up 33% over the last 52 weeks.