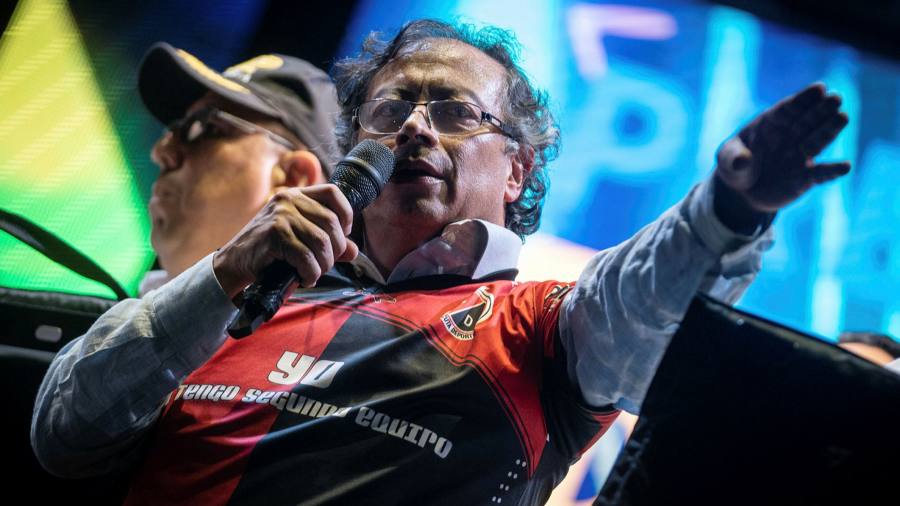 Gustavo Petro once lived a clandestine life as an urban guerrilla and was imprisoned and tortured. Now the former revolutionary is the favorite to win Colombia’s presidential election and lead the most leftwing government in the traditionally conservative South American nation’s history.

His program, which includes ending new oil exploration and open pit mining, banning fracking, scrapping private pensions and raising taxes and public spending, has alarmed Colombia’s establishment, who decry it as too radical. But it is a tag he rejects.

“To say that in Colombia, the whole population should have access to drinking water, would that be [considered] radical in the United Kingdom? ” Petro said in an interview.

Petro, who leads the leftwing “Historic Pact” coalition, has topped virtually every opinion poll in Latin America’s fourth-largest economy this year, and leads his main rival, the center-right former Medellín mayor Federico Gutiérrez, by a double-digit margin . The first of two rounds of voting is scheduled for May 29.

If he triumphs, the country’s wealthiest families will be the main targets of his tax reforms, which aim to raise at least 40tn pesos ($ 10bn) a year, mainly by imposing levies on company dividends, offshore assets and large rural estates.

The move “would affect 4,000-5,000 people in Colombia but it would bring social justice, stimulate production and give us the source of money we need”, Petro said.

[Colombia’s] productivity is among the worst in Latin America and its economy depends on oil, cocaine and coal in that order. It’s unsustainable

He has pledged to use the revenue to fund universal free higher education and a minimum wage for 1.3mn single mothers, among others, and to cut the government deficit, which reached 7.1 per cent of gross domestic product at the end of last year. Taxes on big estates, which are mainly used for cattle ranching in Colombia, would incentivise landowners to make better use of the country’s fertile terrain and create more jobs, for example by growing crops, he said.

Colombia has a landowning structure derived from feudalism, it has never seen land reform, there was never a democratization of land [ownership], ”Petro said. “This is a legacy which comes from. . . feudal Spain. ”

Land reform has been an abiding concern for Petro. As a member of the M-19 nationalist guerrilla movement in the 1980s, he led prospective settlers in a shortlived invasion of church land in the town of Zipaquirá, where he lived. The army subsequently tracked him down and he was tortured and jailed, according to his recent memoirs.

After M-19 signed a peace deal in 1990, demobilized and became a political party, Petro won office as a congressman and became a senator in 2006. He hoped his new party would benefit from Colombia’s 1991 constitution, which was designed to reform a closed political system in which power alternated between two traditional parties. But change was slow coming.

This is Petro’s third bid for the presidency – he narrowly lost to the rightwing Iván Duque in 2018. “Coming from a country with high levels of authoritarianism and almost fascist levels of violence in many regions. . . what I propose is democracy, ”he said. “Democracy for Colombia is a radical change.”

But his wider program has alarmed Colombia’s business community and many middle class voters, analysts said.

A “Petro clause” has been included in some business and property contracts signed this year, said business figures, allowing the parties to scrap the deal if the former guerrilla comes to power. Wealth managers said rich Colombians are seeking to move assets abroad to escape possible new taxes.

Petro is unrepentant, saying Colombia needs to change. “[It’s] one of the most unequal societies in the world and one of the most violent, ”he said. “Levels of schooling. . . are low, productivity is among the worst in Latin America and its economy depends on oil, cocaine and coal in that order. It’s unsustainable. ” 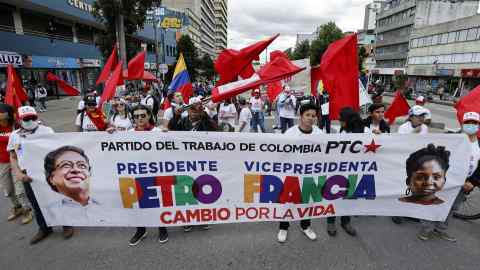 The former rebel’s anti-establishment crusade has won him many enemies. His public appearances are kept secret until the last minute, venues are frequently changed and this month he canceled part of his campaign tour because of death threats. When he resumed it, he wore a bulletproof vest and spoke from behind two shields held aloft by bodyguards.

“Let’s say an assassination attempt is in the air,” he said. “There is more than one person who would like to shoot and plenty of money for it.”

This week more than 50 senior members of Petro’s campaign team sent a petition to the Inter-American Commission on Human Rights, a regional body, asking it to intervene. They urged the commission to appeal to public officials in Colombia not to make inflammatory statements that might endanger the lives of Petro and his vice-presidential candidate Francia Márquez.

Petro compares himself with Chile’s radical young president Gabriel Boric in his aspiration to create an environmentally sustainable economy twinned with social justice and bury a legacy of authoritarianism.

Analysts have praised Petro’s zeal in pursuing the perpetrators of human rights abuses. But Zuleta said his time as mayor of Bogotá, from 2012 to 2015, raised red flags. He was briefly suspended from office after a decision to move rubbish collection back to the public sector backfired, leading to piles of refuse in the streets, and several of his aides quit, saying he did not listen to advice. “The only experience of Petro in public administration was a disaster,” she said.

Petro has rejected the criticism, saying that as mayor he oversaw a decline in poverty in the capital to almost one-third of its previous level, a claim supported by official statistics, and a doubling in the stock market value of the capital’s utility companies. “The best manager Colombia had in those four years was called Petro,” he insisted.

Asked what his long-dead comrades from M-19 would think of his rise to the cusp of Colombia’s presidency, he paused for thought.

“They would be proud, very proud,” he said. “They would have felt it was all worthwhile.”