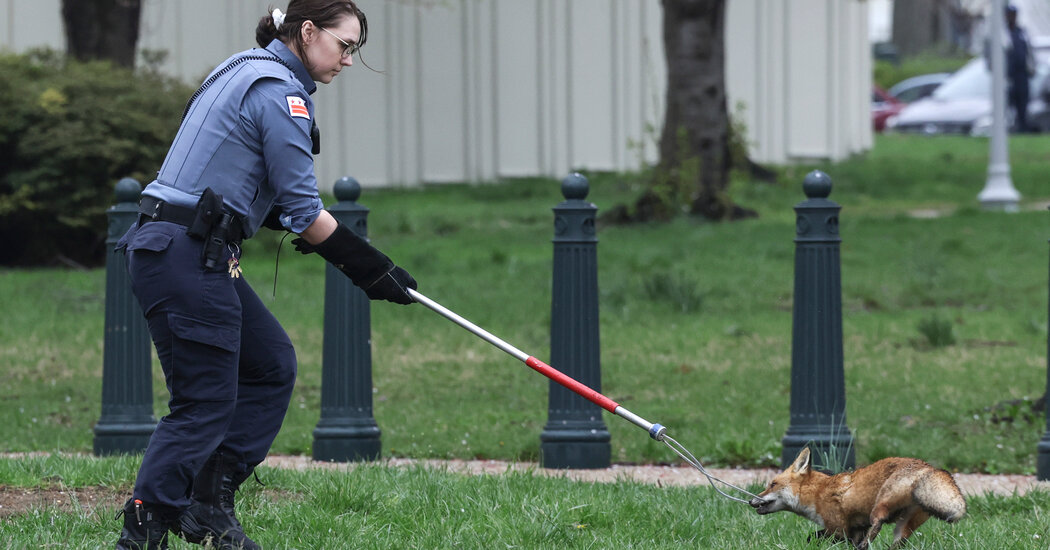 WASHINGTON – For a few hours on Tuesday on Capitol Hill, attention turned briefly from the issues of the day – coronavirus aid, the war in Ukraine and the first Black woman nominated to the Supreme Court – to an urgent question.

“Have you seen the Capitol fox?” a reporter yelled at Senator Chuck Schumer, Democrat of New York and the majority leader, as he departed a televised news conference.

It was around that time that uniformed animal control officers pulled up outside the Capitol in a white van, armed with a net, a catchpole and a cage, in search of a wild fox – or foxes – that had been spotted on the grounds. They were responding to multiple reports of fox sightings around the seat of American government, where lawmakers, staff members and reporters had been attacked – roughly six of them bitten, according to the Capitol Police – by what appeared to be a red fox that had become something of a celebrity.

By the afternoon, one fox had been captured on the grounds of the Capitol, the Capitol Police announced in a news alert on Twitter that blared “#BREAKING” and had photos of the caged detainee. A statement later noted that more wild foxes could be roaming the grounds.

“It is not clear if there was just one aggressive fox,” the statement said.

The canine capture followed a reported attack Monday evening on Representative Ami Bera, Democrat of California. Mr. Bera said he had been bitten by a fox near the Russell Senate Office Building in an “unprovoked” attack, according to a report from Punchbowl News.

“I did not see it and all of a sudden I felt something lunge at the back of my leg,” Mr. Bera said.

The Capitol Police had sent out urgent security alerts on Tuesday warning people on Capitol Hill of “possible fox dens” on the Capitol grounds. The alerts soberly noted that “foxes are wild animals that are very protective of their dens and territory.”

“Please do not approach any fox you see,” the alerts insisted.

And with good reason. Foxes are one of the most common animals in Washington to carry rabies, according to city health officials, and the disease is most commonly spread when a rabid animal bites a person.

Which left Mr. Bera in an unfortunate position after his encounter with the Capitol fox. He was given treatments for tetanus and rabies – seven shots in total – at Walter Reed National Military Medical Center on the recommendation of the attending physician of Congress, a spokesman said.

“One in both buttocks,” Mr. Bera later told CNN.

The spokesman for Mr. Bera said the congressman was feeling well and worked on Tuesday after the attack. He added that Mr. Bera would receive three additional shots for rabies in the coming days.

“As a doctor himself, Representative Bera encourages everyone to stay vigilant around wild animals and to speak with their physician if they get bitten,” the spokesman added.

Ximena Bustillo, a food and agriculture policy reporter for Politico, said she had also been bitten by a fox outside the Capitol on Tuesday.

“That feel when you get bit by a fox leaving Capitol cause that’s of course something I expect in THE MIDDLE OF DC,” Ms. Bustillo wrote on Twitter.

“I was sitting at a gazebo outside the Russell Senate Office building when this little one came trotting up,” Michael Macagnone, a reporter for CQ, said on Twitter, posting a picture of a fox. He added that the fox “then galloped after a squirrel.”

Representative Andy Levin of Michigan said his heart leaped with joy when he heard about the foxes on Capitol Hill, seemingly unaware that one had bitten a fellow Democratic colleague the night before.

Senator Mitch McConnell of Kentucky, the Republican leader, ignored a question about the fox during a news conference on Tuesday, but Senator Joni Ernst, Republican of Iowa, took up the question, affirming that she had seen it. (She later provided reporters with footage of her early-morning encounter.)

By Tuesday evening, the Capitol Fox’s Twitter avatar had been replaced with a picture of the caged animal, and a new lobbying campaign had sprung up in the nation’s capital.

“THIS IS NOT THE END!” read a tweet posted alongside photographs of the fox being captured. “#FreeTheFox. ”