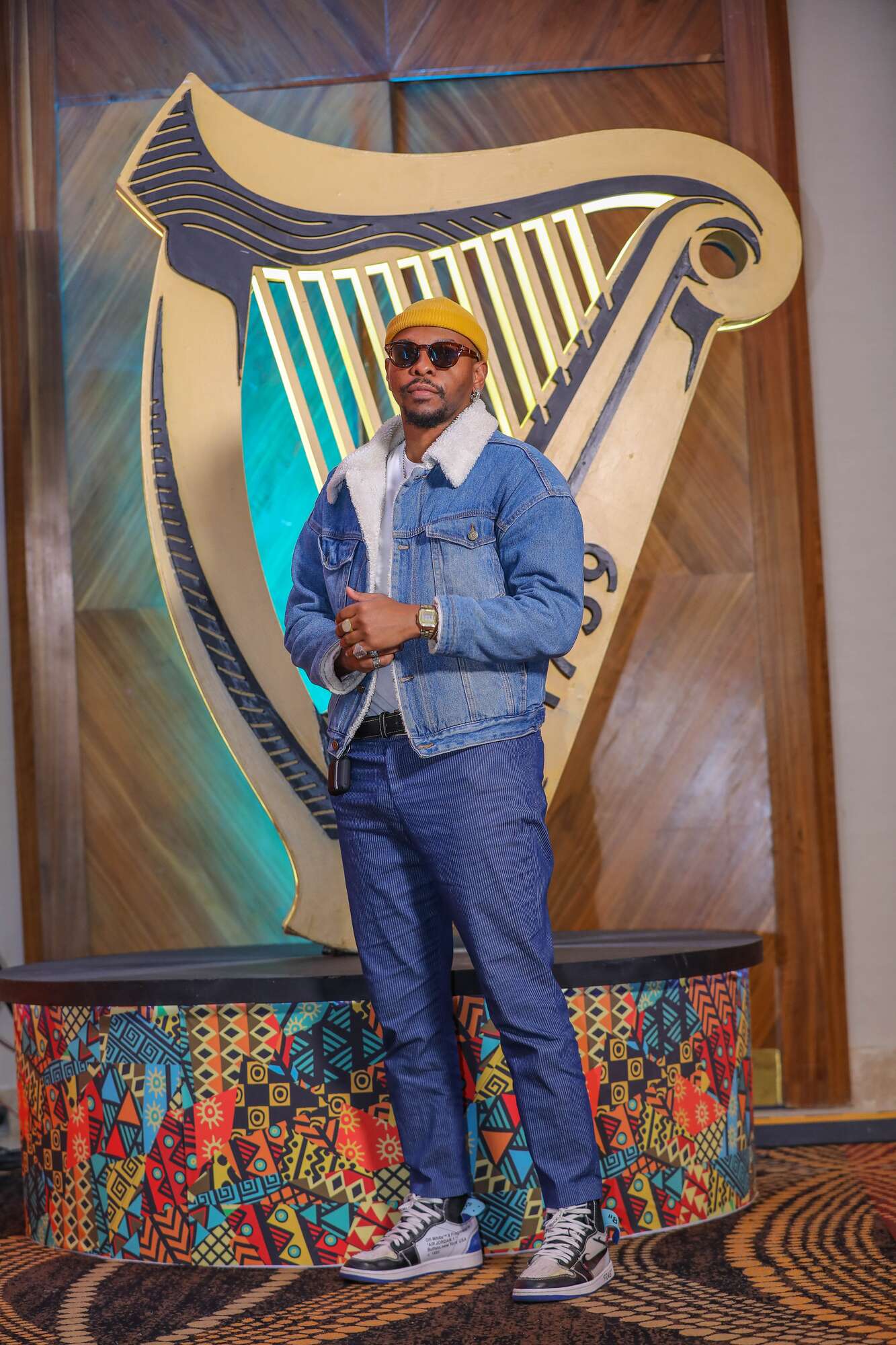 “Fashion trickles down to what you make it.” That’s how Brian Msafiri sums up his understanding of fashion.

Msafiri is a cultural savant. Electrically gifted in various facets of arts including creative production, fashion directing, photography, emceeing, artist liaison and a crafty dresser to top it up.

As is his name, Msafiri is indeed a traveler in his world of fashion.

He isn’t afraid to explore and employ different facets of styles in his fashion, even if it means going unconventional, provided someone notices and talks about it.

From my several encounters with every ‘look’ he pulls up in, there is always an exaggeration to it, even suits which generally aren’t so sophisticated.

“Common is drilling. Don’t you agree? Of course, not everybody approves of how I dress, but that’s the point. To feel good and look different,” he says.

When we meet this time, he is wearing a black and white striped shirt, baggy black pants and a ‘dusty-like’ pair of sneakers.

A small black chest bag hangs on his chest containing his wallet, smartphone, sunglasses and lip balm, among other valuables.

And just like every other time, you will see him, he isn’t missing one of his many caps and hats.

This time he is donning one of his favorite pane-rut caps. A cross earring hangs on his left ear.

“I like to shave bald, reason why you will always spot me wearing hats almost every time,” he explains, smiling.

Msafiri’s love for fashion began during his high school days when his father introduced him to Gikomba Market.

“If you remember, there was a time Toughee’s shoes were the thing in school. If you didn’t have them then you weren’t fashionable enough. The problem is mine never used to last because I was a playful kid so my dad used to take me to Gikomba to shop for secondhand shoes that would last. That’s the first time I encountered quality and started falling in love with fashion because you could get a variety of shoes which were cheaper than Toughees but durable.”

Over the years his fashion sense improved so much so that he informs me he has two closets of two different sets of clothes — one which he wears while going somewhere not important enough and another when showing up for events. Like a Gordon’s Gin event where he is one of the paid partner content creators.

The 29-year-old isn’t just stylish, he is also making money while at it.

Around 2010, Msafiri and his neighborhood friends began styling themselves.

“My friends and I used to be so competitive when it came to fashion, so out-dressing each other always brought out the best in us.”

So stylish they all were but he always cut above the rest, he claims.

It wasn’t long before his sense of style was recommended to the then top Hip Hop group Camp Mullah who was so good that they became the first group from East Africa to win a nomination for the popular prestigious Black Entertainment Awards (BET).

“Back then, I didn’t see styling as a job, I used to do it for free for my friends. I didn’t understand why people felt dressing up as I did was so sophisticated yet I did it so effortlessly. Then one of the many guys I had helped style for free recommended me to Camp Mullah. They were the first celebrities I styled for their Channel O Awards (2012), and later on, worked on music videos for Sauti Sol, that’s when I realized I could make money from styling,” Msafiri recalls.

With time he started styling different music bands then ventured into commercials and the paycheck fattened.

With a rich resume of styling celebrities and bands as well as creating themes for events, corporate brands came calling for his services to bring to life various fashion themes embedded in the brands’ culture.

But not just brands even events.

“I have worked as a Liaison for festivals such as Nyege Nyege and Kilifi New Year. During the Kilifi event in 2019-20, I handled more than 100 artists.”

He was also part of Google’s Alte residency in June 2020 where young Alte artists, fashion entrepreneurs and content creators drawn from all over the country were invited to exchange energy juices and foster collaborations.

“Right now I am in a position to know what value I am bringing to the table and stand by it. When on a commercial gig, on a minimum aspect of things, I charge not less than Sh50,000 per day,” reveals Msafiri.

But the amount is not static, it is always reviewed upwards depending on the number of persons to be styled and the key performance indicator to be met.

Whenever drafting an invoice to a client, Msafiri considers several factors.

“You map out the cost of production, which is, how much will the items needed cost you, the value of your time and expertise then connect it to the client. Who is the client, where will he/she be appearing and how long will he/she have my work for.”

For the years he has been doing this, Msafiri affirms there is good money in fashion styling provided one understands how to go about it and has the passion.

“You will never be taught what we do in school. You just need to be smart about it and figure out how to position yourself. When you give a job and budget, you have to weigh all those factors, don’t fly blind. You don’t want to be given an absurd idea that involves so much work that will take up a lot of production cost and time and leave you with nothing,” he cautions.

Msafiri loves how fashion in Kenya is evolving. “We are trying to move away from thematic spaces where people show up for events dressed in a specific color or theme. The goal now is how do you make yourself stand out within that theme.”

It’s been a year since he last had a styling gig.

“I haven’t done styling a lot in the past year because I am expanding. I have been so much in the space that there is room for new talent and what I am working on now is creating spaces for them to thrive. I am trying to curate different pop-up spaces and events by infusing what is not fashion related with my production, and offer them a platform where they can showcase, sell and resell their Kenyan designs.”