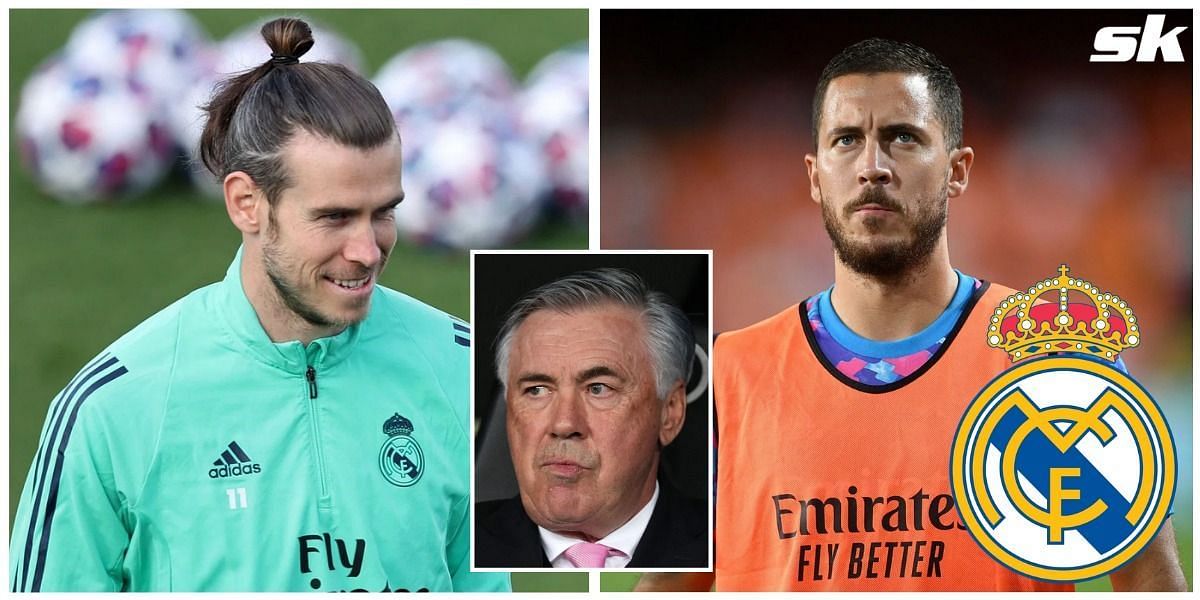 Out of favor Real Madrid star, Gareth Bale was caught laughing at his teammate and fellow outcast Eden Hazard following the substitution snub of the former Chelsea star.

Both wingers were unused substitutes in the quarter-finals of the Copa del Rey for Real Madrid as Los Blancos crashed out at the quarter-final stage with a 1-0 defeat against Athletic Bilbao on Thursday.

Alex Berenguer, who was brought in as a second-half substitute by Bilbao, scored a fantastic 89th minute goal past Thibaut Courtois to send the San Mamés crowd to raptures.

It was Los Blancos’ first defeat in seven games and they will have every reason to be disappointed as the Copa de Rey looked very much winnable this time out with the likes of Sevilla, Barcelona and Atletico Madrid all having been knocked out.

With Karim Benzeme sidelined by injury, Carlo Ancelotti opted to play Marco Asensio as a false nine, leaving Luka Jovic as well as both Hazard and Bale on the bench.

The Italian also decided to play both Vinicius Junior and Rodrygo despite both of them playing for Brazil the day before, which did not seem to go down well with the fans.

In the second half of the game, Bale was pictured laughing at Hazard when the Belgian superstar was told to get back on the bench after spending a long time on the touchline warming himself up.

Hazard and Bale facing the same fate at Real Madrid?

Both the wingers made their big-money dream moves to Real Madrid having lit up the Premier League for Spurs and Chelsea respectively. They have both struggled to live up to their massive pricetag for various reasons.

While the Welshman has won everything he could possibly win at Real Madrid, it’s fair to say that his career could have been a lot better if not for persistent injury problems as well as issues off the pitch.

Hazard broke his ankle twice, suffered multiple muscle injuries as a result and was also misdiagnosed by Madrid’s doctors, it’s really that simple. People keep trying to come up with these explanations as to why he’s struggled but it’s right there for you to see twitter.com/goal/status/14…

Hazard broke his ankle twice, suffered multiple muscle injuries as a result and was also misdiagnosed by Madrid’s doctors, it’s really that simple. People keep trying to come up with these explanations as to why he’s struggled but it’s right there for you to see twitter.com/goal/status/14…

Hazard was also at the top of his game when he made his switch from Chelsea to Real Madrid but he has failed to live up to his usual standards at the Santiago Bernabeu.

The Belgian has struggled to keep himself fit on a regular basis which saw him never getting regular chances in the starting XI while the rise of Vinicius Junior has made things harder for him.

The future does not look bright for the duo at Real Madrid but the club are also likely to find it difficult to offload them owing to their massive wages.