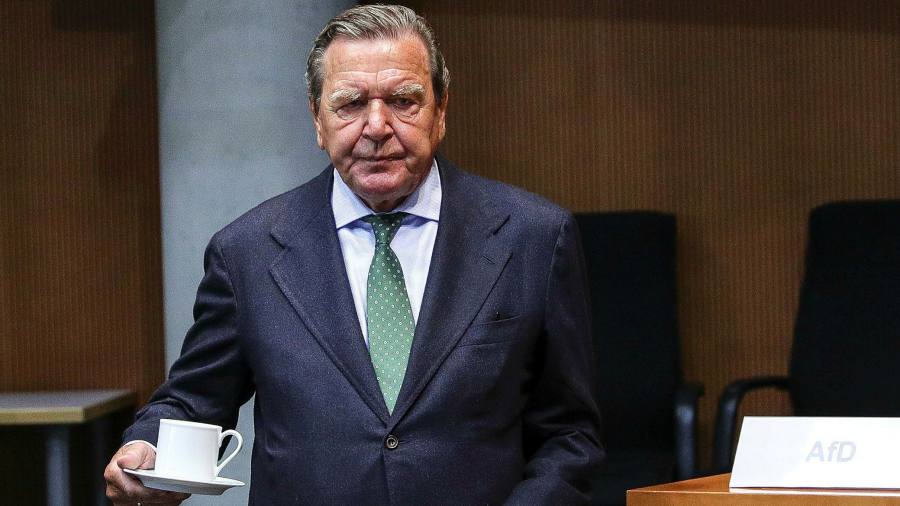 Former German chancellor Gerhard Schröder has stepped down as chair of the board of Rosneft, the state-owned Russian oil giant, after weeks of controversy over his refusal to distance himself from the Kremlin over the Ukraine invasion.

Schröder’s resignation as a director of the crude oil producer, which came as former East German intelligence officer Matthias Warnig also stepped down from the board, follows a vote in the Bundestag this week to strip the former chancellor of his parliamentary privileges.

Rosneft, who is responsible for 40 per cent of Russia’s crude output, said on Friday that the two men had informed it of “their inability to continue their roles at the company’s board of directors”.

It added that Schröder and Warnig had “made a significant contribution to the company’s international business” and praised their “role in implementing large-scale infrastructure projects in Russia and Germany”, which it said sought to increase German economic efficiency.

Schröder’s exit comes months after the former leaders of countries, including Finland, Italy, France and Austria, left their seats on the boards of state-backed Russian companies.

Schröder, 78, who was chancellor from 1998 to 2005, has long been considered to be close to Vladimir Putin and took up a role at the Nord Stream gas pipeline to Germany days after losing office.

Warnig, a close friend of Putin’s, has worked in Russia for years. He oversaw the construction of Nord Stream and then Nord Stream 2 – a project now blocked by Germany and the EU – as chief executive. Schröder also served as chair of Nord Stream 2.

In February, Schröder was nominated to the board of Gazprom, the giant Russian gas producer. But there has so far been no announcement about whether he will take up that role. A confirmatory shareholder vote had been due in June.

This week’s Bundestag vote to strip the former Social Democrat leader of his parliamentary office and staff came after he defended his ties to Russia in a New York Times interview. He also said he did not think Putin was to blame for alleged war crimes committed by Moscow’s troops. There have been widespread calls for him to be expelled from the Social Democrat party.

At the start of the conflict, Schröder had called for the war to be ended as soon as possible, saying that to do so was the “responsibility of the Russian government”.

Reuters reported on Thursday that five foreign Rosneft vice-presidents had resigned from the company ahead of the latest round of EU sanctions on May 15. The executives were Didier Casimiro, Eric Liron, Zeljko Runje, Avril Conroy and Otabek Karimov, it said.

Asked by email if he had resigned from Rosneft, Casimiro, a key lieutenant of Rosneft’s chief executive Igor Sechin, responded by quoting lines from Oscar Wilde’s Ballad of Reading Gaol referring to “two doomed ships that pass in storm”.

Rosneft did not respond to a request for comment.