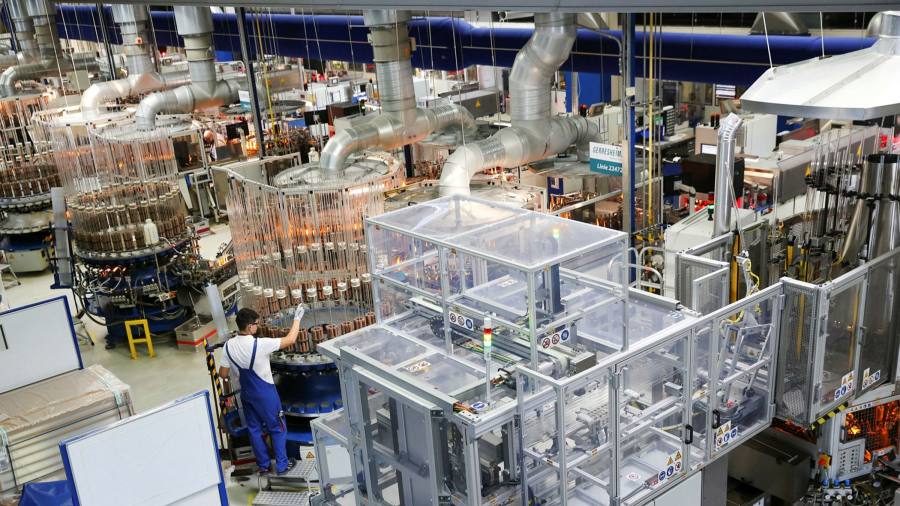 German producer prices surged at their fastest pace in at least 73 years, raising concerns that the eurozone’s largest economy is at risk of a serious bout of stagflation.

Producer prices for industrial products were 30.9 per cent higher in March than they were the same month last year, the sharpest increase since the data series began in 1949. The figures follow downgrades by economists of forecasts for German growth.

Costs for German industry were expected to rise sharply on the back of Russia’s invasion of Ukraine, which has sent prices of energy and other commodities soaring. The official rate, recorded by the Federal Statistical Office, Destatis, was higher than the 28.2 per cent forecast of economists polled by Reuters.

Andrew Kenningham, economist at Capital Economics, said: “The extent and particularly the breadth of the rise in producer prices suggests that German inflation will remain very high for a long time to come.”

The pace of German producer price inflation is now more than twice as fast as during the 1970s, an era marred by stagflation – defined as a period of low growth and high inflation. On Tuesday, the IMF cut its 2022 growth forecast for Germany to 2.7 per cent, 1.7 percentage points below its previous estimate. The downgrade is the biggest across advanced economies, highlighting the exposure of Germany’s energy-intensive manufacturing sector to the conflict in Ukraine.

The IMF has sought to play down concerns that the global economy is again at risk of stagflation. Pierre-Olivier Gourinchas, the IMF’s new chief economist, said this week that the risk of a 1970s-style oil shock was now smaller as the world was less reliant on crude.

German industry does, however, rely heavily on Russian natural gas imports. Destatis said the price of this gas paid by manufacturers in the country was up by 145 per cent from March 2021. Overall energy prices rose 84 per cent, even with petroleum prices rising by a more modest 61 per cent.

The price paid by German companies for other products of which Russia and Ukraine are significant producers, such as fertilisers, feed for livestock, wood products and cereal flour, rose at annual rates ranging between 34 per cent and 87 per cent.

Higher factory gate inflation raises the prospect of increased consumer prices in the months ahead, as some businesses pass on their costs to shoppers. Consumer price inflation is already at a post-reunification high of 7.3 per cent. Some economists expect it to rise to double digits in the coming months.

Carsten Brzeski, economist at ING Research, described Wednesday’s figure as more bad news for the German economy. “Companies are increasingly seeing profit margins coming under pressure, while households see their purchasing power melting away like snow in the sun,” he said.

Kenningham said surging price pressures were “one reason why we think German household spending will be weaker than most expect this year”.