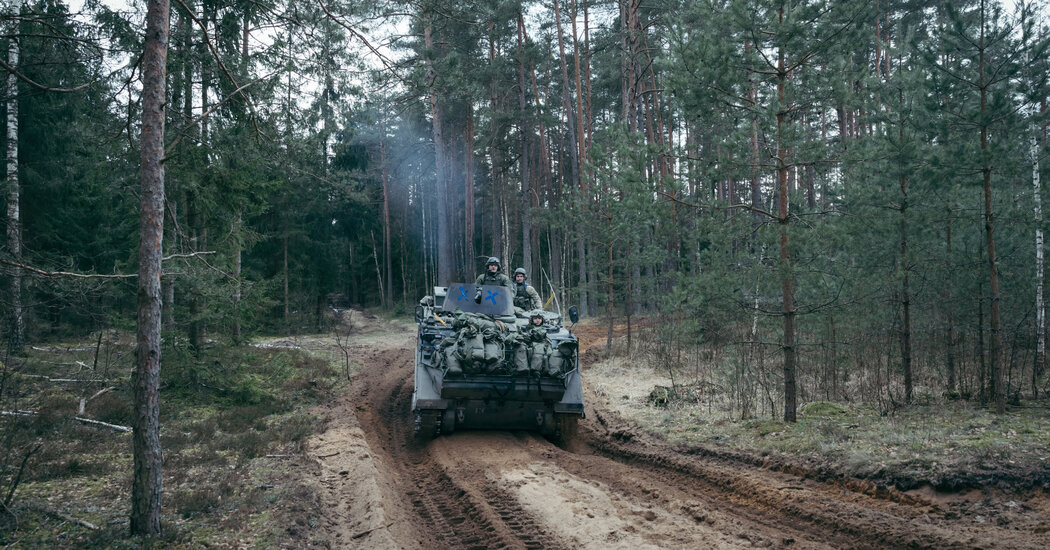 RUKLA, Lithuania – When the signal came over the radio that the NATO border was under attack, German armored personnel carriers fanned out into the forest to stall the enemy’s advance. In short succession, men in camouflage tumbled out of the back of the vehicles and took cover between the trees, assault rifles at the ready.

The battle that ensued one recent afternoon near the town of Rukla in Lithuania, 60 miles from the Russian border, was only an exercise. But since Russia’s invasion of Ukraine, the mission of NATO’s battlegroup in Lithuania to defend the alliance’s external border no longer feels abstract to the soldiers and the country most of them come from.

“The threat perception in Germany changed overnight,” said Lt. Col. Daniel Andrä, the commander of the 1,600-strong battlegroup in Lithuania. “We felt safe, in the middle of the continent, surrounded by friends. Now we have a full spectrum war in Europe and we are concerned, especially since we do not know how far the escalation spiral will turn. ”

Three days after Russia attacked Ukraine last month, Chancellor Olaf Scholz of Germany stood in Parliament and announced the biggest rearmament program for his country since the end of the Cold War, vowing not only to increase the defense budget beyond the NATO target that Germany had failed to hit for years but to invest 100 billion euros – two full years of military spending – to turn around years of underfunding of the German military.

It was a revolution in a country whose Nazi past had long made it reluctant to invest in military power. At the end of his 30-minute speech, Mr. Scholz had overturned a ban on arms shipments to Ukraine, backed armed drones and committed to buying new fighter jets that could drop nuclear bombs, sealing Germany’s continued role in NATO’s nuclear sharing system.

“It is clear that we must invest much more in the security of our country, in order to protect our freedom and our democracy,” Mr. Scholz said.

When Colonel Andrä saw the news of Mr. Scholz’s pivot from his office in Rukla, he was stunned. “I did not believe what I was hearing,” he recalled. “All of this would have been unthinkable only four weeks ago. It was historic. “

History is never far in Europe. The last time German soldiers set up base in Lithuania was during the country’s occupation in World War II. They drove out the Soviets, rounded up and killed more than 90 percent of the Jewish population before, in turn, being driven out by Soviet forces.

The Soviets stayed, making Lithuania a Soviet Republic until the Soviet Union collapsed, a humiliation that Russia’s president, Vladimir V. Putin, seeks to vindicate with his invasion of Ukraine.

So now it is the Germans who are back – this time at the Lithuanians’ invitation – to help protect against Russian aggression.

The German soldiers in Rukla were deployed in the aftermath of Russia’s annexation of Crimea, the first part of Ukraine that the Kremlin grabbed in 2014. Along with soldiers from seven other NATO nations, they have kept watch over their section of the alliance’s border for the past five years, welcomed by the local population and officials alike. “We want a strong Germany,” said Gen. Mindaugas Steponavicius, Lithuania’s chief of the defense staff.

For decades, Germany hung back on security matters, content to lead economically as it clung to a pacifist leaning that was forged in the wake of World War II and the Holocaust. German politicians were reluctant to talk about the military; German citizens were reluctant to hear about it. Before his pivot, Mr. Scholz himself came under fierce criticism for his seeming reluctance to get tough on Russia over Ukraine.

But Russia’s attack on Ukraine has jolted not just the German government into action – public opinion has dramatically shifted, too. Two in three Germans now support arms shipments to Ukraine and back increased military spending. In mid-February, a majority was still opposed to both.

“There is a realization that military power matters,” said Claudia Major, head of the international security division at the German Institute for International and Security Affairs.

But if the war in Ukraine was a wake-up call, it has also exposed how weak a link the Germans still are in the NATO structure. On the morning of the Russian invasion, Gen. Alfons Mais, Germany’s chief of defense, posted a brutally honest assessment of where German capabilities were.

“In my 41st year of service in peace, I would not have thought I would have had to experience another war,” General Mais wrote. “And the Bundeswehr, the army that I am allowed to lead, is more or less broke. The options we can offer policymakers to support the alliance are extremely limited. ”

“The German military was starved of money for years because we had a strategic partnership with Russia and we did not believe we had to defend our territory anymore,” said Ms. Major. “Our soldiers were deployed to help others, whether in Afghanistan or Mali. We were fighting wars of choice. But this is about us and if we are returning to a paradigm of wars of necessity, you need the whole military to be operational. ”

As the chancellor put it in his speech last month: “We need planes that fly, ships that sail and soldiers that are optimally equipped.”

There is a shortage of everything from protective vests to thermal underwear. Radio equipment is 30 years out of date. Only one in three warships is ready to deploy – so few that the navy worries it can not meet all its international commitments.

Even in Rukla, the flagship German NATO mission which has relatively few complaints when it comes to resources, the general scarcity has been felt.

Some of the armored vehicles are five decades old. The radios are more than 30 years old. During international exercises in Lithuania, their equipment routinely made the German units “the weakest link in the chain,” soldiers reported to the parliamentary commissioner for the armed forces on their return from tours in Rukla.

Some in Lithuania joke that they would like some “real soldiers” protecting them. In neighboring Poland, Latvia and Estonia, the NATO battlegroups are led by Americans, Canadians and Britons, respectively.

“The German military is great; we’re so grateful to have them here, ”said Laurynas Kasciunas, chairman of the national security and defense committee in Lithuania. “But we’d also like some American troops, please, combat-ready and ideally permanently.”

Short of that, the challenge, say security experts, is how to ensure that the 100 billion euros in special funds for the German military are spent fast – and wisely.

The government has already announced an order of as many as 35 F-35 fighter jets to replace Germany’s aging fleet of Tornado bombers. On Monday, the chancellor met with Germany’s top-ranking general to discuss what else should get priority on the government’s shopping list.

But it will take more than money to modernize the German military, experts and officials say. Procurement procedures are cumbersome and slow. Purchases above 25 million euros need to be approved individually by the parliamentary budget committee. Tenders cannot just be made in Germany but have to go out to the entire European Union.

“We need to reform the entire procurement bureaucracy,” Ms. Major said. “We now have a lot of money, if we do not spend it wisely we gain nothing.”

In Rukla, the revolution announced in Berlin last month is already being felt, Colonel Andrä said: “The few things that we did not have or do not have, we are getting very fast right now.”

Hundreds of containers of ammunition have arrived. To get a reinforcement of 350 men to Rukla quickly, the defense minister had reduced their deployment time from 30 days to five.

“When we want to, we can move fast,” Colonel Andrä said. “We have shown that we are willing to do more.”