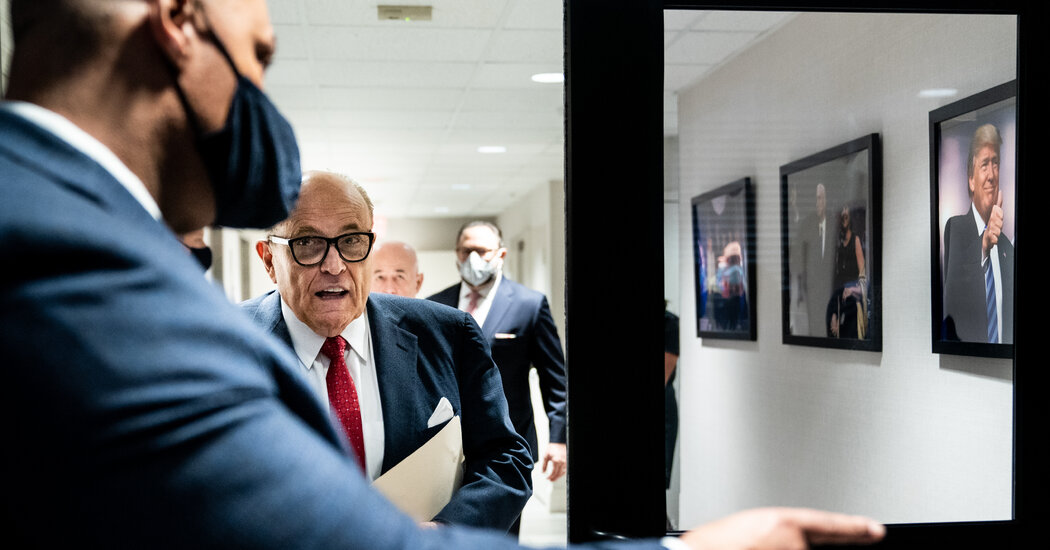 Rudolph W. Giuliani, who as former President Donald J. Trump’s lawyer helped lead the effort to overturn the results of the 2020 election, is in discussions with the House Jan. 6 committee about answering to its questions, according to three people familiar with the matter.

The extent of any assistance that Mr. Giuliani might provide remains unclear and the negotiations could easily fall apart, especially as Mr. Trump continues to publicly rail against the investigation.

But Mr. Giuliani, through his lawyer, has signaled to the committee that he plans to take a less confrontational stance toward its requests than some other members of Mr. Trump’s inner circle who are fighting the committee’s subpoenas or have otherwise refused to cooperate.

Mr. Giuliani’s discussions with committee officials suggest that he may be seeking to avoid a potentially costly legal fight over a subpoena that was issued to him last month. By engaging with the committee, Mr. Giuliani could also make it more difficult for the House to issue a criminal referral of him to the Justice Department for contempt of Congress if he in the end does not comply with the subpoena.

Should Mr. Giuliani ultimately provide the committee with substantive cooperation, it would be a major breakthrough for the investigation and a breach in the relationship between Mr. Trump and one of his closest if most problematic advisers. Mr. Giuliani was instrumental not only in the post-Election Day effort to keep Mr. Trump in power but also in the pressure campaign on Ukraine that led to Mr. Trump’s first impeachment.

One person familiar with the matter said that Mr. Giuliani was still negotiating over whether to give investigators an informal interview or a formal deposition, and that he had not yet determined how much information he might seek to shield from the committee by invoking executive privilege or attorney-client privilege with Mr. Trump.

However preliminary, the conversations suggest that Mr. Giuliani is considering taking a vastly different approach than those taken by other close Trump allies.

Mr. Trump’s onetime chief of staff, Mark Meadows, has been referred to the Justice Department for possible criminal charges after refusing an interview with the committee. Another former aide, Stephen K. Bannon, was indicted in November after refusing to provide information to congressional investigators.

As a key figure in some of Mr. Trump’s attempts to stave off electoral defeat, Mr. Giuliani, the former New York City mayor, would be in a position to tell investigators how much the former president knew about a series of extraordinary measures that were proposed to him last fall and winter in a bid to maintain his grip on power.

Among those efforts was a scheme to disrupt the normal workings of the Electoral College by persuading lawmakers in contested swing states to draw up alternate slates of electors showing Mr. Trump was victorious in states that were actually won by Joseph R. Biden Jr.

Mr. Giuliani was also instrumental in vetting a plan to use the Department of Homeland Security to seize voting machines in order to examine the data housed inside them for alleged evidence of fraud. At Mr. Trump’s direction, Mr. Giuliani asked a top homeland security official if the department could legally take control of the machines – a notion that the official shot down. Mr. Giuliani later opposed an even more explosive proposal to have the military seize the machines.

Mr. Giuliani was subpoenaed with other members of a legal team that billed itself as “an elite strike force” and pursued a set of conspiracy-filled lawsuits on behalf of Mr. Trump in which they made unsubstantiated claims of fraud in the election. They were initially scheduled to testify this week, but were granted delays through discussions with their lawyers.

The subpoena sought all documents that Mr. Giuliani had detailed the pressure campaign that he and other Trump allies initiated targeting state officials; the seizure of voting machines; contact with members of Congress; any evidence to support the bizarre conspiracy theories he pushed; and any arrangements for his fees.

On Jan. 6, speaking to a crowd of Trump supporters before the attack on the Capitol, Mr. Giuliani called for “trial by combat.” Later, after the building was under siege, both he and Mr. Trump called lawmakers in an attempt to delay the certification of Mr. Biden’s victory.

Key Developments in the Jan. 6 Investigation

The GOP resolution. The Republican National Committee officially declared the Jan. 6 attack on the Capitol “legitimate political discourse,” while censoring Representatives Liz Cheney and Adam Kinzinger for participating in the inquiry into the episode. Mitch McConnell, the Senate minority leader, subsequently spoke against the resolution.

The first trial. Prosecutors have provided a revealing glimpse of their strategy for the first trial stemming from the attack on the Capitol, unveiling an inventory of the extensive evidence they intend to introduce.

Fighting subpoenas in court can be expensive, and Mr. Giuliani has already suffered a series of difficult – and potentially costly – legal setbacks.

He is facing a defamation lawsuit from Dominion Voting Systems, accusing him of carrying out “a viral disinformation campaign” made up of “demonstrably false” claims that the company helped flip votes away from Mr. Trump. And in June, his law license was suspended after a New York court ruled he made “demonstrably false and misleading statements” while fighting the results of the 2020 election.

While the committee continues to face stonewalling from top Trump aides and advisers, it has won various degrees of cooperation from a number of senior White House officials, including top aides to former Vice President Mike Pence and Mr. Giuliani’s own aide, Bernard B. Kerik, who once served as police commissioner in New York City.

Mr. Kerik, who worked with Mr. Giuliani to investigate purported claims of election fraud, provided testimony to the committee and a trove of documents, but also kept some key documents secret, citing Mr. Trump’s invocation of executive privilege.

The committee has interviewed around 500 witnesses and issued more than 100 subpoenas, including broad ones to banks as well as telecommunications and social media companies.

Faced with at least 18 Trump allies who have signaled they will not fully cooperate, investigators for the committee have adopted techniques more typically used in organized crime prosecutions than in congressional inquiries and quietly turned at least six lower-level Trump staff members into witnesses who have provided information about their bosses’ activities.

The committee is also considering granting immunity to crucial members of Mr. Trump’s inner circle who have invoked their Fifth Amendment right against self-incrimination as a way of pressuring them to testify.