The NBA Play-In Tournament reaches its crescendo Friday, as four teams battle it out for the final two slots in the postseason just one day ahead of the start of the playoffs.

A 2021 Eastern Conference finalist, the Hawks knocked off the Hornets, 132-103, on Wednesday behind Trae Young’s 24 points and a monstrous third quarter that blew the game wide open. The Pelicans eliminated the San Antonio Spurs, 113-103, in the nightcap on the strength of a 32-point night from CJ McCollum. 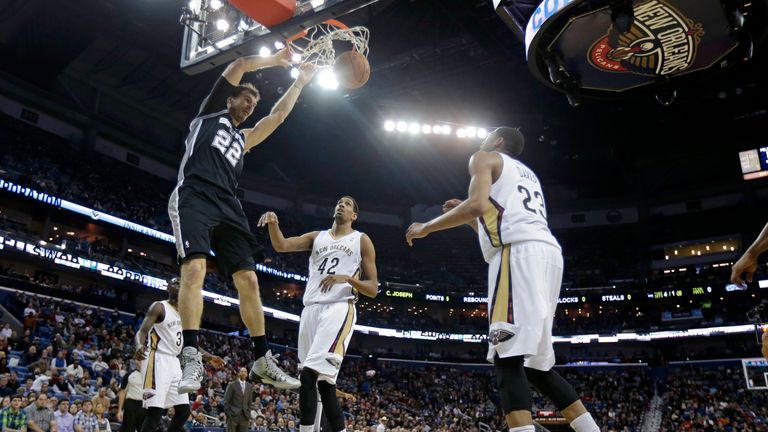 The winner between Atlanta and Cleveland earns eighth in the East and opens the playoffs on Sunday against No 1 seed Miami. “We’re a good team and we’re clicking at the right time,” Young said in his postgame on-court interview. The Pelicans-Clippers winner starts the postseason Sunday on the road, taking on the West’s top-seeded Phoenix Suns.

“It’s win or go home,” Clippers guard Paul George said after pouring in a game-high 34 points in Tuesday’s loss to Minnesota. “Obviously, [if] we do not win, we go home. I could care less who we play. The mindset is we have to win regardless. There’s no pep talk, X’s and O’s. We’ve got to win. We’ve got to win if we want to continue our season. “

The Cavaliers and Clippers find themselves in their respective positions after losses to the Nets and Timberwolves in Tuesday’s slate of games between the seventh and eighth seeds in both conferences. Brooklyn jumped out to a 20-point lead over Cleveland after a quarter to seize a wire-to-wire victory behind Kyrie Irving’s 34 points. The Clippers, meanwhile, fell short to Minnesota, 109-104, in a dogfight that featured eight lead changes and nine ties, as Anthony Edwards and D’Angelo Russell delivered down the stretch after star center Karl-Anthony Towns fouled out. 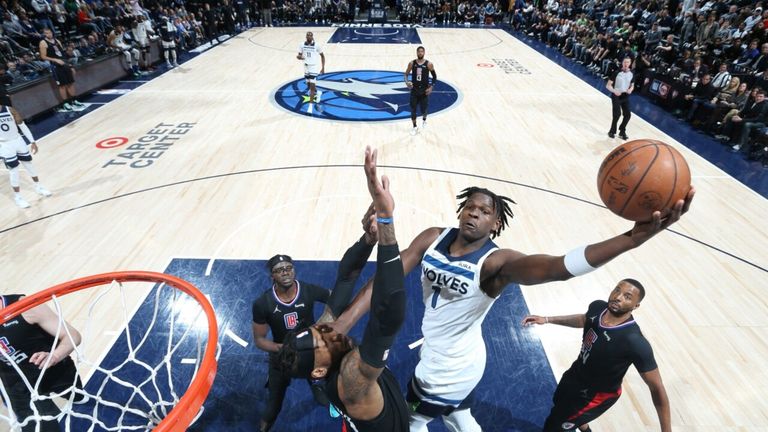 “They played a lot better without KAT on the floor,” Clippers coach Tyronn Lue said. “They got into us defensively. I just do not think we made the right plays.”

For Cleveland, it’s pick your poison when it comes to defending Young, who led the NBA this season in total points and assists. Charlotte learned the hard way Wednesday, despite experiencing some success early with blitzing Young and doubling him. While blitzing Young makes sense, you have got to consider that Atlanta’s roster was constructed specifically to defeat such tactics. Young shot just 3-for-13 in the first half, but he developed a knack for finding open team-mates once defenders come running. That’s how Young dished 11 assists against Charlotte, as all five Hawks starters scored in double figures along with Bogdan Bogdanovic, who chipped in 13 points. “If you can make two guys guard you, it only opens up the floor for everybody else,” Young said. “I have to embrace it.” That’s naturally what you would do when you have got so many solid shooters in the supporting cast such as Bogdanovic, Kevin Huerter, De’Andre Hunter, and Danilo Gallinari. For Cleveland to slow down Young somewhat, it might need to make him work on defense with speedy point guard Darius Garland, who put up 34 points Tuesday against Kyrie Irving. Garland and Young have matched up on seven occasions, with the Cavs point guard averaging 16.7 points, 5.9 assists and 1.3 rebounds. Garland has averaged 24 points in his last two outings against Atlanta. Even though the Hawks won three of the four meetings this season against Cleveland, the Cavs have not yet faced them with all five regular starters healthy.

The matchup at center between rookie Evan Mobley and Clint Capela could prove both highly competitive and impactful. Both are long, rangy, athletic lob threats on the offensive end with point guards capable of getting them the ball often. All-Star center Jarrett Allen’s status for Friday remains unknown, as he’s still recovering from fractured finger. Allen’s return would push Mobley to power forward, giving Cleveland more heft and even more defense in the paint. Cavaliers coach JB Bickerstaff said the team is “just kind of in a wait-and-see” situation with Allen’s potential return.

Zion Williamson has not played a game in 2021-22 and New Orleans started off the season 3-16, only to fight its way to a potential postseason berth – which would mark the team’s first since 2018. The Pelicans have defeated the LA Clippers in three of four meetings this season. Paul George missed only one of those matchups, while CJ McCollum actually played in one of those outings, after joining New Orleans in a February trade. The duo of McCollum and Brandon Ingram could prove difficult for Reggie Jackson and Paul George to contain on the perimeter. Jackson and George are strong defenders, but McCollum and Ingram showed how dangerous they are Wednesday against the Spurs when they combined for 59 points. 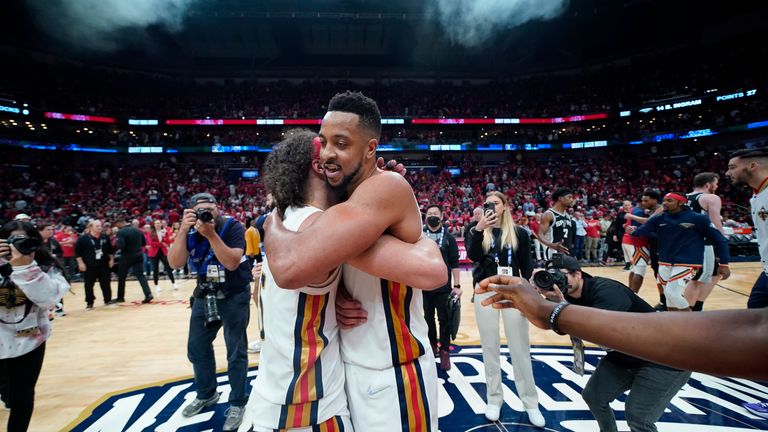 CJ McCollum goes off in the first half, scoring 27 points for the Pelicans, as New Orleans beats the San Antonio Spurs in the NBA Play-In game

Still, the Clippers have demonstrated they can neutralize McCollum and Ingram. During a 119-100 win over New Orleans on April 3, LA limited McCollum to just 7-for-18 shooting, while allowing him to get to the free-throw line on four occasions. That same game, Ingram shot just 3-for-11 for 15 points. It’s a safe bet LA will also keep close tabs on Jonas Valanciunas, who was deadly from deep earlier in the season in wins over the Clippers. The big man shot 5-for-9 from three-point range against LA on November 19, following up on November 29 with a 7-of-8 performance from distance. When the teams last met on April 3, Valanciunas did not attempt a three-pointer. But surely the Clippers will not forget about Valanciunas’ long-range capabilities.

New Orleans rookie Herb Jones averaged nearly two steals per game during the regular season, and he’s shown the ability to lock up opponents’ best playmakers, which should come in handy against George. During a Pelicans win over the Clippers in November, Jones found himself 1-on-1 against George for a possession, and came out of it with a block that surprised the crowd at Smoothie King Center, while putting him on the map as a defender . Jones has shut down Donovan Mitchell already this season, and the Pelicans have shown no hesitation matching him against guards such as Ja Morant and Trae Young, as well as wings like Pascal Siakam and Anthony Edwards. The Clippers will attempt to minimize Jones’ impact on the defensive end.

The rush of live games continues on Sky Sports this week with the Play-In Tournament and start of the NBA Playoffs – see the list of games here spirit subscribe to watch the live action.