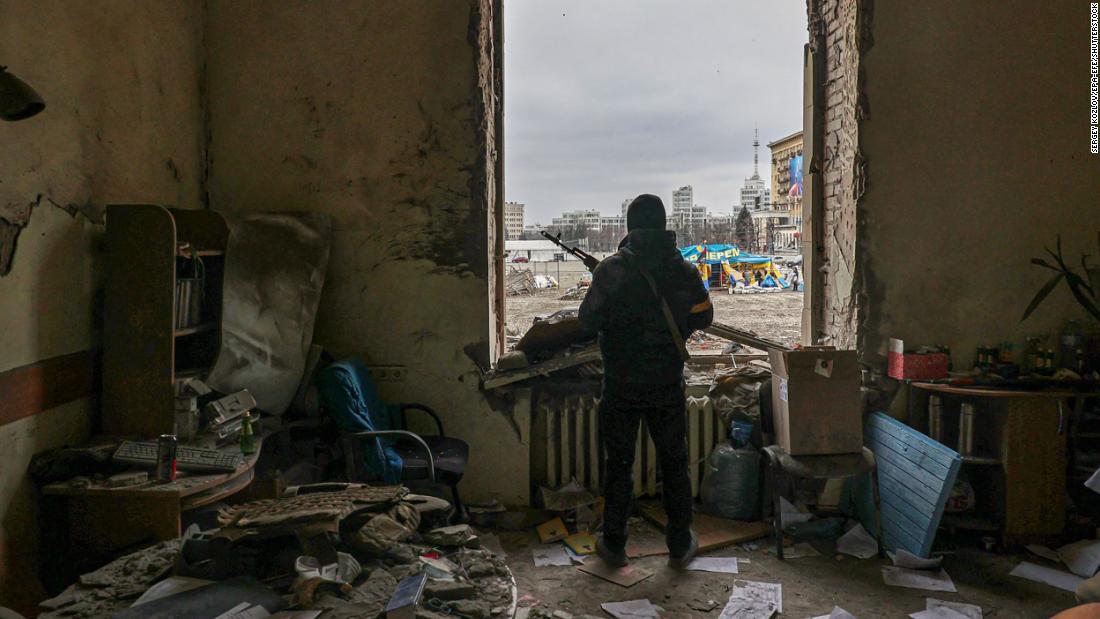 For the Ukrainian diaspora, Putin’s war resonates deeply. We asked Ukrainians, expats and political experts from across the globe to weigh in. The views expressed in this commentary are their own.

When my elder brother, Volodymyr, joined the Ukrainian Armed Forces, he explained his decision to me: “little one, do not you realize this is a European war. It just happened to start in eastern Ukraine.” He was killed by shrapnel in 2017 in the Luhansk region on the front. He was fighting against Russian troops that were pretending not to be there.

They no longer need to pretend. The Russian president ordered their assault on the whole of Ukraine, targeting the military as well as civilians, including hospitals and ambulances.

My civilian friends – writers, academics, artists – are all staying in Ukraine to defend their cities. A scholar of English Victorian literature is sheltering internally displaced persons (IDPs) and coordinating the flood of media requests. A filmmaker and a historian joined the country’s growing territorial defense. A professor is giving an online lecture on Ukrainian culture from Kyiv while listening out for air raid sirens outside her window.

I am a historian. I realize that we are living through a moment that will be on every syllabus of European history. Now is the time to decide what place each of us wants to have in that history. Stand With Ukraine.

Oleksandr Bilyy, a 39-year-old Ukrainian truck driver and father-of-two, spoke to CNN as he was crossing the Polish border into Ukraine. His words are lightly edited for clarity.

On Thursday I woke up in Glasgow (Scotland) at 6.00 am, my wife calling me, telling me Russians were bombing our capital and our country. So that’s it. I drove my truck to London, picked up my car, and started driving to Poland – I arrived there Saturday.

My family live in Lviv. I have two kids there. I’m a truck driver, I do jobs all over.

I do not feel any fear now, maybe it’s the adrenaline. I do feel very very angry. I would not feel comfortable staying at home and watching on TV as Russian people try to kill my people. I could not watch that. I feel much better now I’m going there.

Now I have four guys in my car, I’m taking them from the Polish border. They are all Ukrainians, who live in other places, but are going back to fight the Russians. They are from New Jersey, the Czech Republic, Mauritius and Poland.

We just crossed into Ukraine.

The poet from Odessa on the language of oppressors

Ilya Kaminsky was born in Odessa, Ukraine, and moved to the US in 1993 when his family was granted asylum. Kaminsky is the author of “Dancing in Odessa” and “Deaf Republic.” He lives in Atlanta.

While friends from Ukraine write about making Molotov cocktails with their children, I’m reminded of lines from one of Odessa’s most famous living poets, Boris Khersonsky:

people carry explosives around the city

Putin claims that Russian speakers in Ukraine must be protected, so he sends troops. I come from Odessa, a majority Russian-speaking city in Ukraine. On Snake Island, just off Odessa’s coast, Putin’s navy just bombed 13 Russian language speakers. That’s the kind of protection Mr. Putin offers.

Does the Russian language in Ukraine need protection? Since the start of this war in 2014, many Russian-speaking poets have chosen to side with their Ukrainian-speaking neighbors. I received this email from my friend:

In solidarity with Ukraine, starting tomorrow I will write poetry in Ukrainian. “

Just imagine this: one of Russia’s best poets stood up and refused his own language. That is what Mr. Putin has accomplished.

The Kyiv journalist on a David vs Goliath battle

Nataliya Gumenyuk is a Ukrainian journalist specializing in conflict reporting. She is founder of the Public Interest Journalism Lab and author of “Lost Island: Tales from the Occupied Crimea.”

As I write, it’s been more than 120 hours since the Ukrainian army started deterring the Russians in non-stop battle at all fronts.

US intelligence has expressed concerns that the Ukrainian capital may fall within a few hours, if not – a few days. Does the fact that Russian troops have not fully taken control of any major city mean the Russians are weaker than expected, or that Ukrainians fight well? Partially both. In one recent poll from the local Pravda news site, 70% of Ukrainians believe Ukraine would win in the long run.

It’s hard to distinguish whether it’s bravado or high morals sustaining our fight against a formidable force. For me, the latter is the reason for such confidence.

The question is at what cost Ukraine may win. According to the Ukrainian Minister of Health, at least 200 civilians have been killed, among them more than a dozen children. The horrible euphemism of ‘collateral damage’ is sometimes used to describe these tragedies, because Moscow’s airstrikes though hitting civilians, might not target them specifically.

In the current situation – with Putin’s obsession to punish Ukrainians and prove his own strength – we have reason to be worried about Russians targeting civilian areas. The important question now, is how can we avoid this.

The history lecturer on Putin’s unraveling

Marci Shore is associate professor of modern European intellectual history at Yale University, focusing on 20th and 21st century Central and Eastern Europe. She is the author of “The Ukrainian Night: An Intimate History of Revolution,” among many others.
On Thursday February 24, the Russian writer Viktor Shenderovich gave an interview to the Russian news station Echo Moskvy. “This is a war by one person,” Shenderovich said. Then the phone line cut out.
This is Putin’s war, and it’s grotesque. I listened to Putin’s majestic Crimea speech eight years ago. And I listened to Putin’s speech last Monday presaging his intention to invade Ukraine.

This is no longer the master chess player, the shrewd grand strategist. He is no longer a rational actor, even in the coldest and most cynical sense. He seemed unwell and unhinged: “We’re ready to show you what real decommunication means for Ukraine…”

This no longer felt like a man playing a high-stakes chess game, now it felt like a scene from “Macbeth.” My intuition was that an aging man facing his own death had decided to destroy the whole world. Ukraine is very possibly fighting for all of us.

The sociologist on escalating violence in his homeland

It feels like the country where I was born may be lost forever. Russia’s invasion of Ukraine looks like the culmination of the process that started on November 30, 2013, with the brutal crackdown by the riot police on the Euromaidan protesters in Kyiv. From that moment, I increasingly felt that things were developing from bad to worse.

Before 2014, Ukraine had hardly seen even a massive riot on its territory, not speaking of a war, for two consecutive generations.

This moment of peace was not to last. The Euromaidan revolution left about 100 people dead. Then the annexation of Crimea by Russia. The war in Donbas. The tragedy in Odessa on May 2, 2014, when dozens were killed in clashes. Poroshenko’s cynical exploitation of the divisive issues of Ukrainian identity, in a desperate attempt to keep in power despite failing all of the revolution’s aspirations.
When Zelensky won in a landslide victory, many Ukrainians hoped that the vicious circle would be broken. But all the opportunities that a hugely popular president had were shamefully missed.

Now, Vladimir Putin upscaled the disaster to a horrible level. But even worse things could be ahead. Maybe his goal is for a quick surrender of Ukraine’s government (like Georgia in 2008) and forcing the West to recognize the Crimea annexation, step back on NATO membership and some harsher version of the peace settlement.

Then again, Ukrainian resistance has been stiff. The defeat of Russia in Ukraine would mean the beginning of the end for Putin.