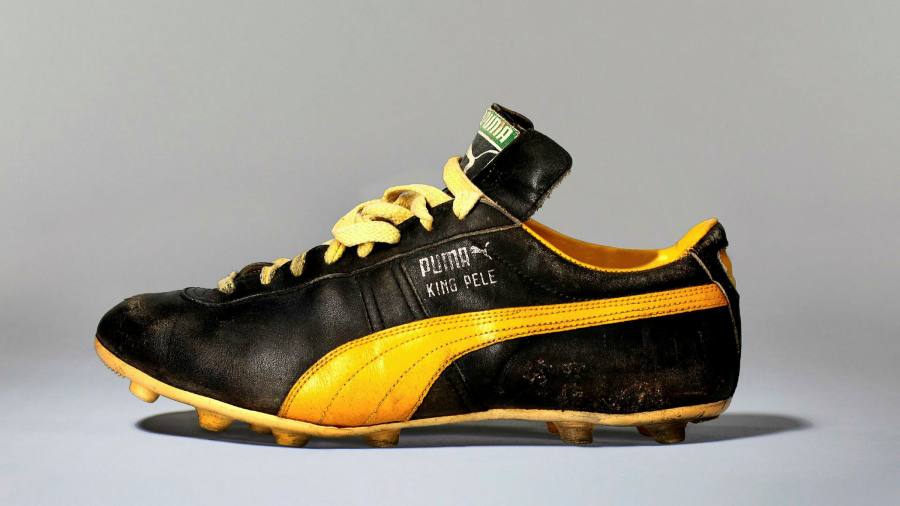 I used to love football. But, by the 1980s, I was falling out of love. Finally, I experienced a moment of clarity. Standing – because that was what we did then – at Craven Cottage watching my team, Fulham, being beaten 1-0 by Notts County in the cold and the rain, I understood that I was getting zero pleasure from watching this unskilled hoofing. I never looked back. Yet London’s Design Museum is doing precisely that.

Football, it turns out, is not naturally a beautiful game – it had to be designed that way. We do not necessarily think of the design of the sport and, according to curator Eleanor Watson, there has never been a major exhibition about that relationship.

Football: Designing the Beautiful Game brings together hundreds of fragments from earlier eras. Incredible original drawings by Archibald Leitch, the Scottish architect whose first major stadium, Rangers’ Ibrox in Glasgow, was responsible for 25 deaths when a timber stand collapsed in 1902. He designed Sheffield Wednesday’s ground, Hillsborough, too. And Craven Cottage, along with dozens of others.

Then there are George Best’s brown boots, on which he wrote the games in which he scored. The winger from Belfast – a little streak of sozzled, hairy magic – was playing for Fulham when I started going as a child in the 1970s. And there are the calling cards of the “firms” – groups of vicious hooligans who in the 1970s and 1980s traveled to away games in their casual gear and Italian sportswear, slicing up rival fans with Stanley blades. They’d leave the meticulously designed cards on their victims’ bloodied wounds.

Everything I loved and hated about football is right here. It’s a panoramic show that tries to do a bit too much, from the first leather footballs to the latest video games, but it covers a lot of ground along the way. From club badges and shirts, through stadiums, supporters’ banners and fanzines, it embraces the top-down hierarchies (the game emerged from elite British private schools) and bottom-up responses (the fans provide much of the cash and keep the game alive ), unearths fascinating artefacts and restores the long history of women’s football.

Excellent stories include the first World Cup final, in 1930, when Uruguay and Argentina could not agree on whose ball to use, so they played first with one belonging to Argentina, who led at half-time, then Uruguay’s, who came back to win 4-2. There are the well-known rivalries between Adi and Rudolf Dassler – founders of Adidas and Puma, respectively – and their elegant boots, so different to the British ones of an earlier, more robust era.

There is Pelé’s Brazil shirt, designed by an 18-year-old in a competition, and there are the works of British graphic designer Anthony Barnett, who was responsible for dozens of dazzling typefaces for teams, including Liverpool, Real Madrid, Manchester United and the Italian national side. Yet, because manufacturers rarely credit designers, he remains virtually unknown. Andreas Gursky’s huge photograph of Dortmund’s “Yellow Wall” of 24,000 standing fans is an epic sight. And Juergen Teller’s pictures of the agony and ecstasy of a family watching a match on television are raw and beautiful.

The beautiful game has been globalized and commodified, but it still reeks of emotion, politics, ecstasy, despair, hope and loyalty

The extent of football’s journey from its scrappy beginnings, in which players sewed club badges on to their own dress shirts, to the multibillion-pound replica-kit business, and Leitch’s intense but austere stadiums to Tottenham’s new £ 1.2bn arena with its extensive VIP hospitality area, becomes very clear. This is a working-class game, with its roots, counterintuitively, in upper-class privilege. It can be played and enjoyed by even the poorest, and its best players provide the hope of a glamorous future. It is as much fantasy as reality, intensely local and truly universal.

The section on the architecture of football is a quick whisk through Wembley Stadium (a turnstile and preserved patch of turf from the original stadium), Munich’s Allianz Arena, Eduardo Souto de Moura’s brilliant Braga Municipal Stadium in Portugal, and ends on Herzog & de Meuron’s intriguing, unrealized design for Chelsea’s Stamford Bridge. That proposal encapsulates the vicissitudes and politics of the modern game. Chelsea’s owner, the sanctioned Roman Abramovich, must now divest himself of the club he resurrected. It will be bought by a consortium; the fans will have, I expect, no say.

Yet without them there is nothing. The beautiful game has been globalized and commodified, but it still series of emotion, politics, ecstasy, despair, hope and loyalty – and even the most exploited fans are granted, at least in this exhibition, a little agency.