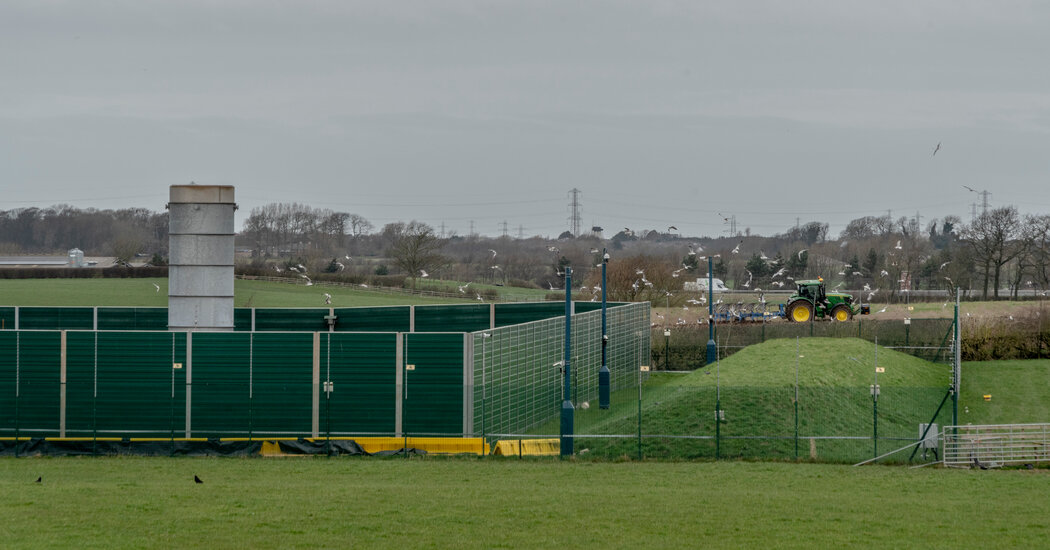 LITTLE PLUMPTON, England – There’s not much left of Britain’s only operable fracking site, which was mothballed in 2019 when it caused earth tremors so strong that they were felt miles away.

A flare stack for burning off methane gas rises above the green security fence, but the drilling rig is gone and the plan was to pour concrete down the wells, consigning Britain’s experiment with shale gas extraction to history.

But with war ravaging Ukraine and disrupting the global energy supply, Britain’s fracking industry has won an 11th-hour reprieve.

Workers were expected to start sealing the two wells this month, but – to the alarm of local campaigners – the energy firm, Cuadrilla, is instead discussing with regulators an extension to its license.

“It’s frustrating, because they were so close to actually capping the wells,” said Susan Holliday, who lives a few hundred meters from the site in Lancashire, in northwestern England. She has opposed fracking for eight years and had thought that victory was within her grasp.

“If it had been a month earlier, it would have been too late, they would have done it,” she said.

Yet following the Russian invasion of Ukraine Europe is scrambling for new energy supplies as it tries to wean itself off imports from Russia, and Germany on Wednesday took the first step toward an emergency plan that could eventually lead to gas rationing.

In Britain around 30 lawmakers from Prime Minister Boris Johnson’s governing Conservative Party have appealed to him to end a moratorium on fracking, and the business secretary Kwasi Kwarteng recently conceded that, at this moment, “it did not necessarily make any sense to concrete over the wells. ”

Enthusiasts who go further include Andy Mayer, energy analyst at the Institute of Economic Affairs, a free-market think tank, who argues that “capping these wells now is like dynamiting a gold mine in a gold rush.”

The push to save hydraulic fracking – which creates fractures in rock formations to release the natural gas trapped inside – is part of a wider assessment of energy policy in light of a global crisis that has also put pressure on companies to extract more of Britain’s dwindling North Sea energy resources.

Domestic gas and electricity bills could triple this year – alongside a wider squeeze on living standards – and Nigel Farage, the veteran pro-Brexit campaigner, has called for a referendum on scrapping the government’s plan to meet a net-zero target for carbon emissions by 2050

According to the British government, in 2020, 41.9 percent of energy consumed was from gas, 31.2 percent from oil and 3.4 percent from coal.

Britain imports relatively little energy from Russia (and plans to phase out all purchases of oil this year).

But the global price spike is affecting all countries that rely to some extent on imported oil and gas, and in Britain it is causing a reassessment of the government’s energy policy. Even before the war in Ukraine, a rise in costs had driven 30 British power companies, most on the smaller side, out of business.

Against this backdrop, Mr. Johnson plans to outline a new energy security strategy soon that is expected to call for more renewable and nuclear power.

Given his political vulnerability after a scandal over Downing Street parties that violated pandemic lockdown rules, Mr. Johnson is likely to at least keep the door open for fracking, which has the support of a hard-line caucus within his own party that could make trouble for him.

This month, one energy minister, Greg Hands, said that “shale gas and new approaches could be part of our future energy mix” as the country transitions to green energy, while adding that “scientific evidence and local support was vital.”

Proponents of fracking include Jacob Rees-Mogg, a senior minister, and David Frost, Mr. Johnson’s former cabinet colleague. They express hope that Britain can replicate the experience of the United States, which became an energy exporter largely because of shale.

In a statement, Francis Egan, Cuadrilla’s chief executive, expressed frustration that the government, despite its rhetoric, had not yet given clear instructions to its energy regulator to allow fracking to proceed. He appealed to ministers to “ensure that companies like Cuadrilla and others are not forced to suffer the risk and financial cost of operating in a position where a government can keep changing its mind and require wells to be cemented whilst they are eminently useful.”

The moratorium on fracking has been in place since the Lancashire site caused an earthquake with a magnitude of 2.9 three years ago, prompting the government to say that, before continuing, Cuadrilla must show that shale could be extracted safely.

Experts are not so optimistic, however, because the real quantities that can be extracted only become clear once serious drilling begins. They say that any significant quantities of shale would take years to come online, and so would not help the immediate crisis.

Energy concerns. Germany activated the first step of an emergency plan that could lead to the rationing of natural gas within the country. The move comes amid growing concerns that Russia could cut off deliveries unless payments on existing contracts were made in rubles.

“It’s likely to be considerably more expensive here than in the US because we do not have the wide-open spaces; we are a very densely populated island, ”said Dieter Helm, a professor of energy policy at Oxford University. He said that the geology in Britain was much more complex than in the shale-producing regions of the United States, and that the extent of reserves generally only became clear when companies drilled.

“My guess is that the combination of the complexities and the dense population make it an order of magnitude more expensive than the US,” he added.

Nonetheless, supporters of shale think that the current energy crisis presents an opportunity to persuade consumers to think again. Speaking in Parliament, Andrea Leadsom, a Conservative lawmaker, said that communities should be asked whether they would be willing to commit to shale gas extraction in their area if it meant that they would be compensated with free gas.

Outside a supermarket in Kirkham, not far from the Lancashire fracking site, shoppers expressed concern about the looming rise in energy bills.

“We are going to be hit, for sure, but what can you do?” said Bob Whiteside, a retired driver, as he stood by an ATM, adding that he would welcome fracking if it cut bills. “Just get on with it,” he said.

But not everyone shares his attitude.

Claire Stephenson, an opponent of fracking, described the noise of the 2019 quake as “an internal roar, the most bizarre thing I’ve ever experienced,” adding, “You could hear the ground and feel it shake: My cat fell off the pray.”

Protesters in Lancashire who promise to oppose any resumption of fracking include Barbara Richardson, a former voter for Mr. Johnson’s Conservatives.

What’s happening now, she added, is “a last-ditch attempt by the fracking industry to try and get some credibility, and what’s despicable is that they are using the Ukrainian crisis to do it.”

Locals thought that their opposition had killed off fracking, she said, “so I think a lot of people are shocked that it’s back on the table.”