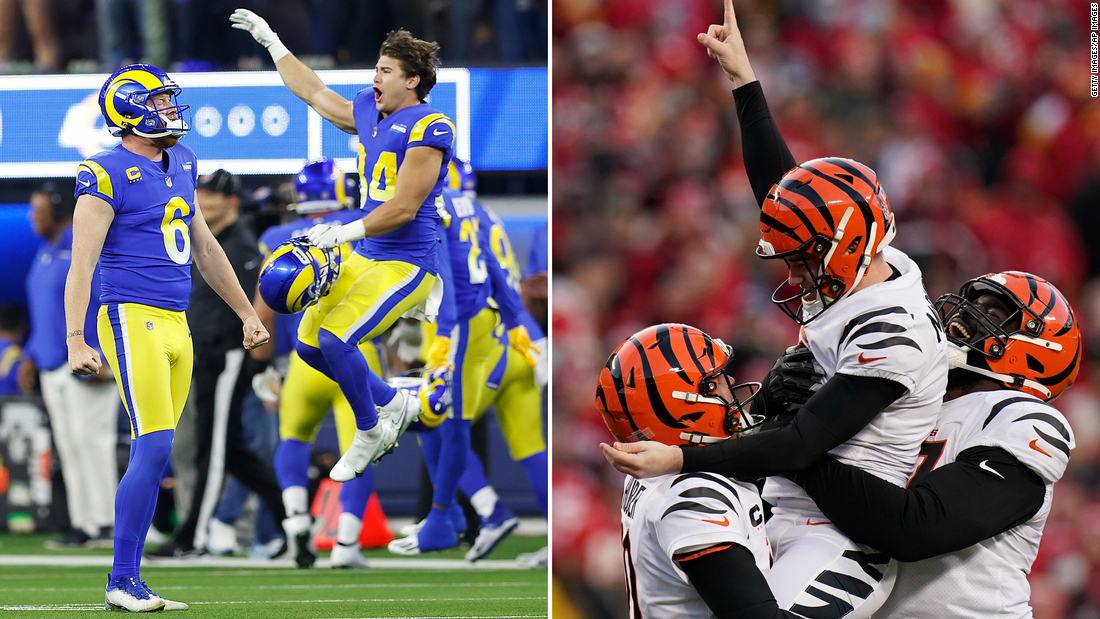 It will be broadcast live on NBC and streamed on Peacock. You can also watch at NBCSports.com and the NBC Sports App. NBC was originally scheduled to broadcast the 2021 Super Bowl but swapped years with CBS in order to have both the Super Bowl and the Winter Olympics, which began February 4, on at basically the same time.

The Los Angeles Rams and the Cincinnati Bengals. Both teams won their respective division championships in thrilling come-from-behind fashion, with the Bengals overcoming a huge deficit to beat the Kansas City Chiefs, 27-24, in the AFC Championship. The Rams mounted a fourth-quarter comeback against the San Francisco 49ers, ultimately beating them 20-17, to take the NFC Championship title.

Where is the Super Bowl being played?

Super Bowl LVI is being played just outside Los Angeles, in Inglewood, California, at SoFi Stadium, home to the Rams (and the LA Chargers). It’s the second year a Super Bowl team will have home field advantage (the Tampa Bay Buccaneers won the Super Bowl at home last year). However, technically for uniform and coin toss purposes, the Bengals will be considered the “home team” and the Rams will be the visitors since the designations alternate between AFC and NFC champions each year. Yes, it’s weird, but we do not make the rules.
So, that means the Bengals will wear their standard home jersey, and the Rams will call the coin toss to open the game, as well as overtime if necessary.

What players should I know about?

The quarterbacks. Both were picked first overall in their respective NFL drafts, both wear # 9, and both played at SEC schools in college, though not at the same time.

Bengals quarterback Joe Burrow is in just his second season as a pro and spent the latter part of his first sidelined with a torn ACL. Burrow was drafted first overall by the Bengals in the 2020 draft, and while he started his college career at Ohio State, he later transferred to Louisiana State University, where he won a National Championship and was the Heisman Trophy winner in 2019. If Burrow can pull off a Super Bowl win, he’ll become just the third quarterback in history to win both a college football National Championship and a Super Bowl, joining the likes of Joe Montana and Joe Namath (yes, they’ll all be named “Joe . “)

Rams ‘quarterback Matthew Stafford is in his first season with Los Angeles, after more than a decade as the Detroit Lions’ signal caller. Stafford’s college career at the University of Georgia was more than respectable, but he failed to lead the school to a National Championship. He ultimately chose to forgo his senior year and entered the 2009 NFL draft, where he was selected first overall by the Lions. He was traded to the Rams last year, and coach Sean McVay said a few weeks ago the team would not be where it is today without Stafford’s leadership.

The Rams are favored to win, according to Bleacher Report, which is owned by CNN’s parent company Warner Media. As far as matchups go, no one would have predicted this game at the start of the season, so who knows. The Rams are 12-5 on the season, while the Bengals are 10-7.
Bleacher Report also breaks down the odds of Burrow throwing an interception, Rams’ wideout Odell Beckham Jr. notching over 64 receiving yards, and other assorted bits.

Who’s performing in the halftime show?

What about the commercials?

Don’t worry, we’ve got a preview!

Who should you root for?

This NFL post-season was filled with a number of nail-biters, prompting some sports analysts, and even the NFL itself, to call it the greatest playoff season ever, so it seems possible this final game could follow suit.

The Bengals are certainly the underdog (undercat?), Not only in this matchup, but from a franchise perspective as well, having never won a Super Bowl and not appearing in one since the 1980s. The Bengals also had not had a winning season in several years, until now.

Now in their second Los Angeles era after returning to the city in 2016, the Rams seem to have cemented themselves as “Hollywood’s Team” (sorry, Charger fans). Between Los Angeles and St. Louis, the Rams have made five Super Bowl appearances, most recently a loss to the New England Patriots in 2018 in Super Bowl LIII. They won their only NFL championship in 2000, in Super Bowl XXXIV.
For all things Super Bowl LVI, check out our more of CNN’s coverage here.