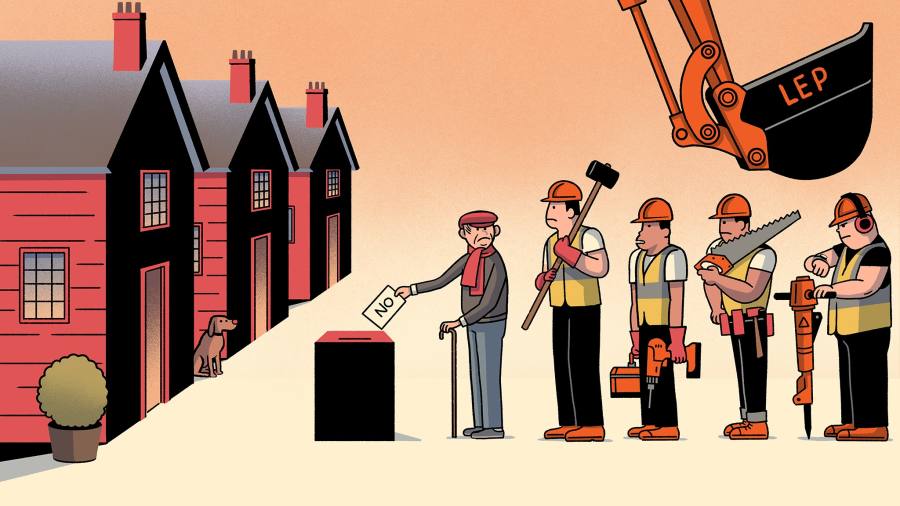 Hello, I’m calling on behalf of the Loft Extensions party. I wonder if we can count on your support in the forthcoming street ballot. As you know, we face a serious battle with the Cellar Conversion Coalition, whose policies could undermine the foundations of the entire street. Did you see that video of the road where four houses collapsed because of cellar work? We believe our safer vision for the road will increase property values ​​while allowing more multiple-occupancy dwellings for those seeking to capitalize on part of their house. And, by the way, our view is shared by the Conservatory Association, with whom we are in a progressive alliance.

Is this the future of local democracy? Michael Gove’s exciting plan to allow community and even street-level ballots as a way to win local approval for property developments is an exciting idea, which could make developers more attentive to the needs and fears of residents. The hope is that by securing community buy-in more homes can be built. It’s such an appealing idea you almost wish it could work.

But because every householder in history is ready to go to war over a millimeter of fence line, you have to wonder if this is likely to deliver a significant increase in new homes. I also worry about political polarization. There is enough tension over the jubilee street party in my road and we have not even had the bake-off result yet.

Even so, this is a chance to bring everything we love about politics down to street level. Clearly much will depend on the type of development envisaged but we do need to set some rules around campaigning. Will there be limits on spending? Should I be allowed to employ my wife as part of my private office? Can I expense the new duck-house?

There are exciting opportunities for some vicious negative campaigning such as smearing opponents on social media. Trump-style insults such as Crooked Hillary could definitely be deployed on the neighbors. I’m looking forward to getting my teeth into Never Mows his Lawn Steve, Illegally Running a Business from Home Alan, Needs to Fix her Guttering Janet, and, of course, Probably a Drug Dealer Kevin.

I’m very excited about the formation of a Nimby party, just as long as it does not meet in my house

Bigger developments will demand more professional campaigns. I’m very excited about the formation of a Nimby party, just as long as it does not meet in my house. The Nimbys (or as we used to call them, conservatives) will go around explaining that there simply is not the infrastructure to tolerate further development, apart perhaps from some new tennis courts and a gastropub.

Interviewed on Nextdoor Radio, its leader will tell residents: “We all acknowledge the need for more homes but we do need to stay sensitive to the essential character of the area, namely that we live here and like it how it is. And furthermore we have invested heavily already, hang on if I can just finish this point, you only have to walk along the street to see some stylish new front fences and some lovely wisteria, which add to the whole tone of the place. ”

The challenge will be greater for advocates of change. Party leaders will need to be able to sell a vision to voters, an optimistic message such as Build Back Better, Get Brexit Done or Oh Jeremy Corbyn. It is not as if pro-development parties can use accurate slogans like Building Busier Buses or Months of Congestion and Noise. So they will probably need to call themselves something like the Progress party, or the High-Density Homes for our Children party.

I see some slick marketing and maybe a pledge card of key promises: two new schools, a new doctor’s surgery and a Little Waitrose on the corner. (Actually the Little Waitrose on the Corner party could be a winner). Cambridge Analytica will be coming onboard to target ads via Nextdoor to ensure that voters get messages that work for them and not for the stroppy old git at number 36.

Technically electoral law does not permit giant bungs to voters, but perhaps the new rules will allow developers to promise communal benefits like subsidized doggy day care or free Nespresso machines at every junction. A shot in the arm for sensible development.

This is the future. It’s time to take politics down to the next level.