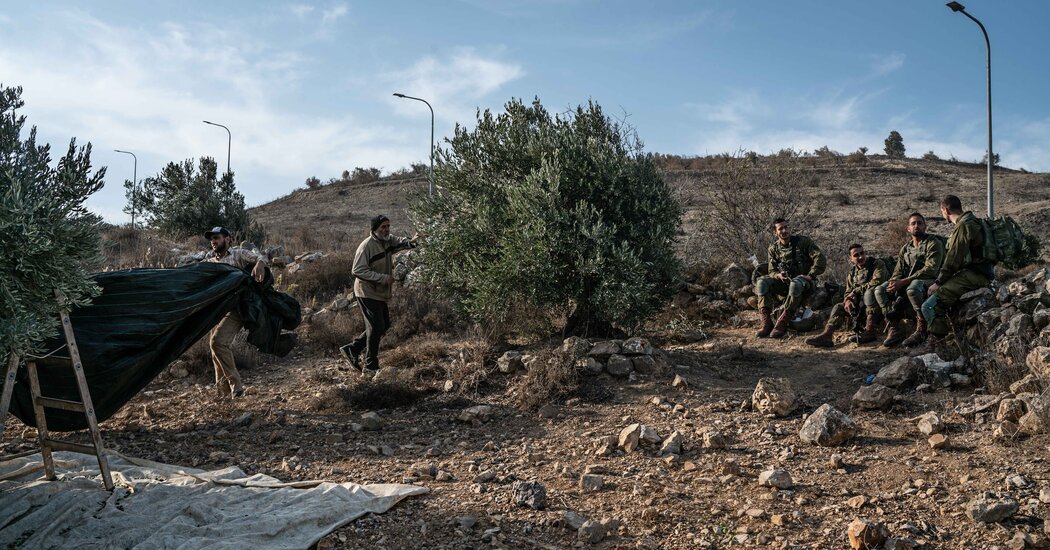 BURIN, West Bank – The Israeli settlers streamed down the hill toward Palestinian farmland, some waving sticks, some throwing stones, all masked.

They began beating a group of Palestinian villagers and Israeli rights activists, who had been planting olive trees on the edge of a Palestinian village. One settler threw a flammable liquid across an activist’s car and set it ablaze. At least seven people were injured.

The mob attack outside the village of Burin last month, captured on video by human rights advocates, was part of an escalation of civilian violence across the occupied West Bank in the past year. In 2021, the number of injurious attacks by settlers on Palestinians, and by Palestinians on settlers, reached their highest levels in at least five years, according to the United Nations.

But if the numbers are roughly comparable, the power dynamic is different.

The settlers benefit from a two-tier legal system in which settlers who commit violence are rarely punished, while Palestinian suspects are frequently arrested and prosecuted by military courts. Of the 111 police investigations into settler attacks monitored by the Israeli rights group Yesh Din in the past five years, only three led to indictments.

Settlers, unlike Palestinians, have the protection of the military and are rarely in danger of losing the land they live on.

And it is the settler violence that is now attracting most alarm – not only among Palestinians, but also from the Israeli security establishment.

Benny Gantz, Israel’s defense minister, described it as “a serious phenomenon” and announced the formation of special military teams to patrol flash points like Burin. Three Israeli reserve generals wrote in January that settler violence posed a threat not only to Palestinians, but also to Israel’s stability and its global image.

But the impunity of recent settler attacks has led to concerns that the Israeli military is not doing enough to stop them. In some cases, repeated attacks have driven Palestinian farmers off their land, helping expand direct Israeli control over the West Bank.

“I was scared and shocked – can you imagine being on your own land and suddenly being attacked by a criminal gang?” said Brusli Eid, 46, one of the Burin residents attacked last month. “They’re trying to make us sick of being on our land.”

Violence has long been deployed by both Israelis and Palestinians in the West Bank. Israel occupied the territory in 1967, and it has since been settled – illegally, according to most interpretations of international law – by hundreds of thousands of Israelis, many of whom consider the land their biblical birthright.

Settler attacks are carried out by an extremist minority, condemned by Israeli officials, and do not involve the vast majority of Israeli settlers.

And the recent violence, which rose sharply during the Gaza war last spring and the Palestinian olive harvest last fall, is still far lower than in more intense periods of the Israeli-Palestinian conflict.

But rights groups have documented several instances over the past year where the military either stood by and did nothing as an attack took place or, as in Burin last month, did too little too late.

“Time and again we see incidents of settler violence in which the army stands next to the settlers and effectively provides them protection,” said Lior Amihai, the director of Yesh Din. “That gives settlers the confidence to continue their attacks and vindicates the Palestinian belief that they have no one to call for protection.”

In an earlier confrontation in Burin last October, a masked settler set a Palestinian olive grove on fire as his companions and Palestinian villagers threw stones at each other, according to video taken by Yesh Din. An Israeli soldier approached and, according to the video, spoke briefly to the settlers, who walked away, the fires still raging around them. None were arrested, the police said.

In a third confrontation at the same spot in November, video showed a row of six Israeli soldiers standing motionless as settlers and Palestinians threw rocks at each other. When they finally acted to defuse the situation, they fired tear gas at the Palestinians, according to video and witnesses, and again allowed the settlers to go home.

Two of the nine settlers were later arrested before being released pending further investigation, the police said. After the mob attack in January, one person was arrested and two detained, but none have been charged.

The army said that any claim that it “supports and permits settler violence is false,” and that the two videos did not tell the whole story of the confrontations. In each, it said in a statement, troops did not initially intervene because they were outnumbered and waiting for reinforcements.

In other cases, the army has issued restraining orders and curfews against settlers they deem a potential threat.

May. Gen. Yehuda Fuchs, the commander of Israeli troops in the West Bank, said in an interview that he was concerned about what he called “settler terrorism,” and was exerting “a lot of effort to avoid it.”

His job, he said, was to protect all residents of the West Bank, “never mind if they are Israelis or Palestinians.”

To the villagers of Burin, settler attacks are part of a strategic attempt to push them off their land. Since the 1980s, the village has gradually become sandwiched between the hilltop settlements of Yitzhar and Givat Ronen.

Both settlements are built partly on privately owned Palestinian plots and are protected by the Israeli Army. Among their 2,000 residents are followers of two extremist rabbis.

Israelis coming from the direction of these settlements attacked Palestinians or vandalized their property in Burin and neighboring villages at least 18 times in 2021, according to Yesh Din.

Such harassment has contributed to the seizure of at least 250 acres of private Palestinian land around these two settlements in recent decades, the organization said.

There is no overall estimate for the amount of private Palestinian land lost this way across the West Bank, but a 2021 study of four settlements conducted by the Israeli rights groups B’Tselem and Kerem Navot estimated that settlers had seized more than 9,000 acres of Palestinian farmland through intimidation in those locations alone.

Families living on the edge of Burin have installed metal grills on their windows to prevent rocks from shattering the glass and security cameras to observe settler attacks from inside. Some bar their children from playing at the edge of the village.

Violence against farmers and vandalism against their trees have become so common – more than 11,700 Palestinian-owned olive trees were damaged last year, according to the UN – that the Israeli Army provides escorts so farmers can safely reach their groves.

But because the army patrols each affected plot as little as two or three days a year, some farmers reached their groves just twice last year, not nearly enough time, they say, to complete the necessary work.

Before the nearby settlements were built, the olive harvest in Burin had a carnival-like atmosphere, several villagers said. Entire families camped out under the trees, grilled meat in the evenings and sang songs about olives.

But in recent years, small groups of harvesters have spent only a few hours at a time in the groves, reducing their revenues by more than half, they say.

Mr. Asous now earns more money as a garbage collector in Burin. “We can not wait for this harvest to end,” he said. “Because you do not know whether you’ll come back alive.”

In Yitzhar and Givat Ronen, no one publicly defends the recent attacks, let alone admits to participating in them. Community leaders say they were conducted by disenfranchised youths who tainted the settlers’ cause by associating it with violence.

A spokesman for Yitzhar, Tzvi Succot, disowned the recent violence but said he understood its cause: The attackers, he said, were afraid of the Palestinians, felt unprotected by the army and believed they needed to strike pre-emptively.

In 2008, a Palestinian man stabbed and wounded a boy from Yitzhar, and in 2009, two Palestinians killed five members of a Jewish family in their home in a nearby settlement – attacks that still haunt settlers, he said.

Noam Jackson, a founder of Givat Ronen, said he did not recognize any of the masked settlers filmed in the recent attacks near his settlement, and could not speak to their motives. But he said it was possible that they were angry that Palestinians like the Eids had constructed new homes near the settlement, making it harder for the settlement to expand.

It is “logical that this construction is something that they would like to respond to,” he said.

Although Givat Ronen and the Yitzhar outposts are unauthorized, the government has taken no action to remove them, and has instead provided them with military protection, while municipal authorities have provided them with services like garbage collection.

The farmers could take their land claims to court, but such cases are rarely successful.

The prime minister’s office and the Defense Ministry both declined to comment on this dynamic.

Since Mr. Gantz sent in new military patrols last fall, the rate of attacks has fallen. But the olive harvest was nearly over by then, so it is likely to be another year before the effect of the new patrols can be assessed.

Palestinians say they will mean little if the army does not maintain this presence – and if they do not arrest violent settlers.

Brusli Eid, a Palestinian police detective, named for the martial arts movie star Bruce Lee, was shot in 2011 by a settler in his elbow and pelvis while building a home nearby. The Israeli authorities dropped criminal charges against three suspects in the attack, citing a lack of evidence.

“What does that look like to you?” he asked. To him, he said, it looks like “the Israeli government is protecting the settlers and encouraging their actions.”