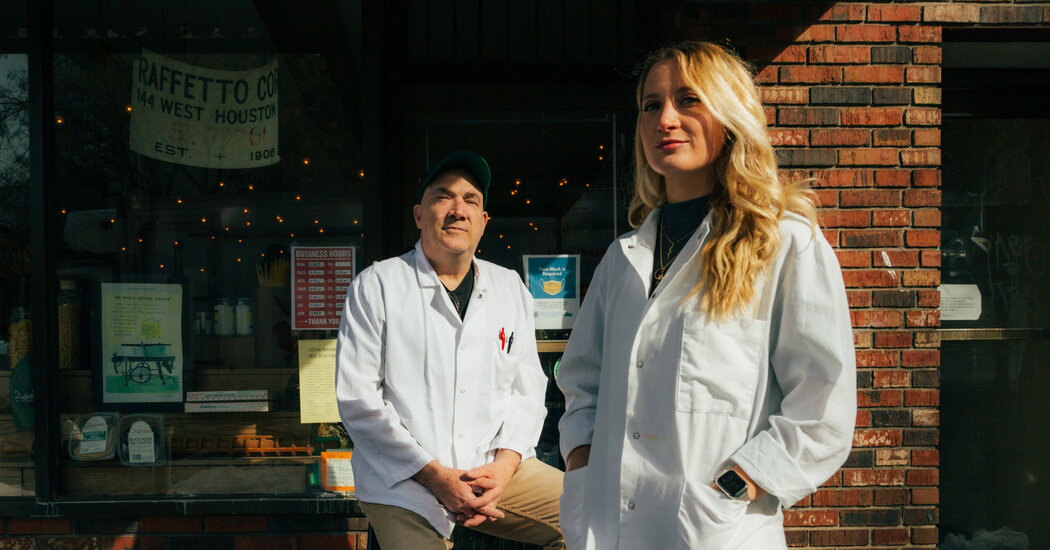 In this series for T, the author Reggie Nadelson revisits New York institutions that have defined cool for decades, from time-honored restaurants to unsung dives.

There are those who think of Raffetto’s on West Houston Street as a kind of monument to fresh pasta. “That store should be a designated landmark and a UNESCO World Heritage site,” says one of its devoted customers, Beatrice Tosti di Valminuta, who owns the East Village restaurant Il Posto Accanto. “Everything they prepare is divine: the pumpkin ravioli, the meat tortellini – the list is too long.” In addition to Il Posto Accanto, the store supplies Il Mulino, Patsy’s, Arturo’s Coal Oven Pizza and many others. “More than 200 restaurants and shops across the city and the tristate area,” says Andrew Raffetto, 59, who owns the store, which also sells to regular customers, with his brother, Richard, 61.

Raffetto’s, with its bright green awning, has been in operation for more than a century. In the 1960s, I would pass by on my way to school every day, and it seems to me to have remained unchanged – though memory is a tricky thing and the store felt far more exotic to me then, when fresh pasta was still a foreign concept to most people, who got their spaghetti from a box or even a can. Still, it’s not all nostalgia. Raffetto’s continues to seduce. “When I first moved to the city more than a decade ago,” says one writer, “buying fresh pasta from there was a special treat.”

“The shop has not changed much, as far as I or my father can recall, either,” says Sarah Raffetto, 32, part of the fourth generation of the family to work for the company, which was founded by her great-grandfather Marcello Raffetto, a baker originally from Genoa. Like so many other immigrants, he put his skills to work by doing what he knew best and set up a namesake pasta-making operation on Sullivan Street in 1906. Fourteen years later, he moved it to its present location near Macdougal Street. (A savvy businessman, he bought the building in 1919 for around ten thousand dollars.)

The other week, when it was frigid and gray out, I walked over to Raffetto’s, where inside it was warm, bright and filled with the scent of garlic and tomatoes. Sarah, wrapped in an apron, was in the kitchen at the back of the shop, stirring sauces – marinara, Alfredo, arrabbiata – simmering in big stainless-steel pots and mostly made according to recipes created by her grandmother Romana, who began devising them for the store in the 1980s. “We make all of them, as well as the prepared dishes, right here,” says Sarah, who is small, blond, ebullient and in love with food and her family’s culture. “Creating within my Italian heritage, in my favorite city in the world, is truly a gift.”

In the shop’s early days, when refrigeration was rare, Raffetto’s mostly sold dried pasta, but not anymore. Rows of wooden drawers still hold dried pasta in every shape, but at the front of the store, on the left, is a wall of shelves stocked with Italian groceries – olive oil, coffee, olives, tuna, canned tomatoes – and to the right is a case filled with chilled items, including prepared dishes such as lasagna, cavatelli with broccoli rabe, pappardelle with grilled vegetables and sweet sausage and arborio rice pudding. And then there is the unadorned fresh pasta Raffetto’s is famous for. Made every day at the company’s factory in New Jersey, which is overseen by Richard and one of his sons, it’s not only driven to the shop but also shipped out to other stores and restaurants throughout the tristate area. It comes in the classic varieties (plain egg and spinach), of course, but over the past 40 years or so, as the staple has become a mainstay of gourmet cooking and New York’s restaurant scene has become increasingly dominated by Italian food rather than French , Raffetto’s has adapted.

“People began to ask for fancy flavors,” Andrew says. As a result, Raffetto’s sells pasta made with black squid ink, black pepper, parsley and basil, chestnut, saffron and even chocolate. “In the ’80s,” he continues, “I even had somebody ask me for peanut pasta. We did it, too – we crushed peanuts into the dough. ” Likewise, the ravioli, stored in fridges or a freezer against the shop’s back wall, is no longer filled only with the traditional meat, spinach and cheese; there are varieties stuffed with lobster, black or white truffles, goat cheese, mushroom and more. Some come in up to three sizes and, ahead of Valentine’s Day, there is also a heart-shaped style.

In fact, you might call Raffetto’s the home of bespoke pasta. Customers can even have sheets of it cut while they wait – in five different widths of ribbon – on a machine that dates to 1916 that the Raffetto family and regulars refer to as the guillotine. (It was once immortalized in a drawing by Maira Kalman in The New Yorker.) To demonstrate, Sarah, like a pizzaiola tossing a pie, flips a large sheet of spinach dough onto the clunky old contraption. “It will cut any width you like,” she explains, ultimately setting it to a quarter-inch tagliatelle. (Other popular requests include eighth-inch linguine and three-eights-inch fettuccine.)

When she’s not in the kitchen, Sarah is up front helping customers, greeting neighbors and suggesting sauce and pasta combinations. On this wintry day, people are chatting as they browse the shelves, wheeling in babies, inquiring about friends and relatives and how local businesses are surviving the pandemic. A couple of tourists who have wandered in look puzzled at what appears to be a party in a pasta shop.

Both Andrew and Sarah are deeply invested in the neighborhood. As a boy, Andrew played basketball at the courts on the corner of West Houston and Sixth Avenue. “As I got older, I would stay out until one or two in the morning, and instead of going home before work, I’d just say, ‘Time to make the tortellini'” he recalls. Later, when he and Sarah’s mother split up, he raised Sarah in an apartment above the store, with help from his parents, who also lived in the building. Like Andrew, Sarah attended Our Lady of Pompeii School just a few blocks away on Bleecker Street. “After school, she would go to Caffe Dante on Macdougal for ice cream,” Andrew says. And now Dante, in its new incarnation as a prizewinning purveyor of cocktails and small plates, buys its pasta from Raffetto’s. “We used to make our own fresh pasta, but then we realized Raffetto’s was better in terms of both quality and quantity,” says Linden Pride, who co-owns Dante with his wife, Nathalie Hudson. “Considering we are essentially on the same block, and both businesses have been in the vicinity for 100 years, we’re very proud to be able to support them.”

Although people often think of New York’s Italian neighborhood as being farther east and south, its last remaining blocks clustered around Mulberry and Grand, there was also a Greenwich Village Italian community. At the beginning of the 20th century, small businesses boomed along West Houston, Bleecker, Carmine and Sullivan Streets. Families who lived in the old tenements there all knew each other. The area was also the bohemian heart of Greenwich Village, where writers and artists discovered cheap Italian food at restaurants with candles in Chianti bottles. The two worlds met, too, at the old coffee houses like Le Figaro Cafe, at the corner of Bleecker and Macdougal.

Because she wants everyone to experience the world she grew up in, Sarah created an events and pop-up dinner company, Petite Pasta Joint, in 2019 with her business partner, Emily Fedner. At least once a month, 24 ticket holders – “We sell out in about eight minutes,” says Fedner – find themselves in Raffetto’s, where a long table is set for dinner. The lights go up. The music goes on. And the two women cook and serve Italian dishes, of course – sweet corn raviolo al uovo in brown butter, black pepper-infused tagliarini cacio e pepe and shrimp scampi – but Fedner, the daughter of a Russian Jewish family, also adds takes on the food from her own culture, which tends to include a liberal amount of preserved fish.

For my part, Raffetto’s has cured me of a terrible ailment I rarely admit to: I really do not like to cook. I feel the pressure; I hear in my ear a score of tetchy pundits who say everyone should be able to cook and, worse, that you should take refuge in its joys. But this is New York. What’s wrong with takeout?

The following Saturday night, as I now often do, I think of Sarah’s reassuringly simple instructions when I open the packages of Gorgonzola and ravioli I picked up at Raffetto’s for dinner at home with friends: “Just drop them straight from the freezer into a pot of boiling water: eight minutes. ” I do exactly that, then bathe them in a little sweet butter; it’s perfect. Afterward, we share tubs of ice cream in two new flavors that Sarah has concocted – one a rich chocolate seasoned with the oil used to make the Genoa toast the shops also sells, the other a homage to her grandma’s zucchini cake. Both are rich, creamy and a little spicy, and for a few hours the voices in my head are mercifully quiet.