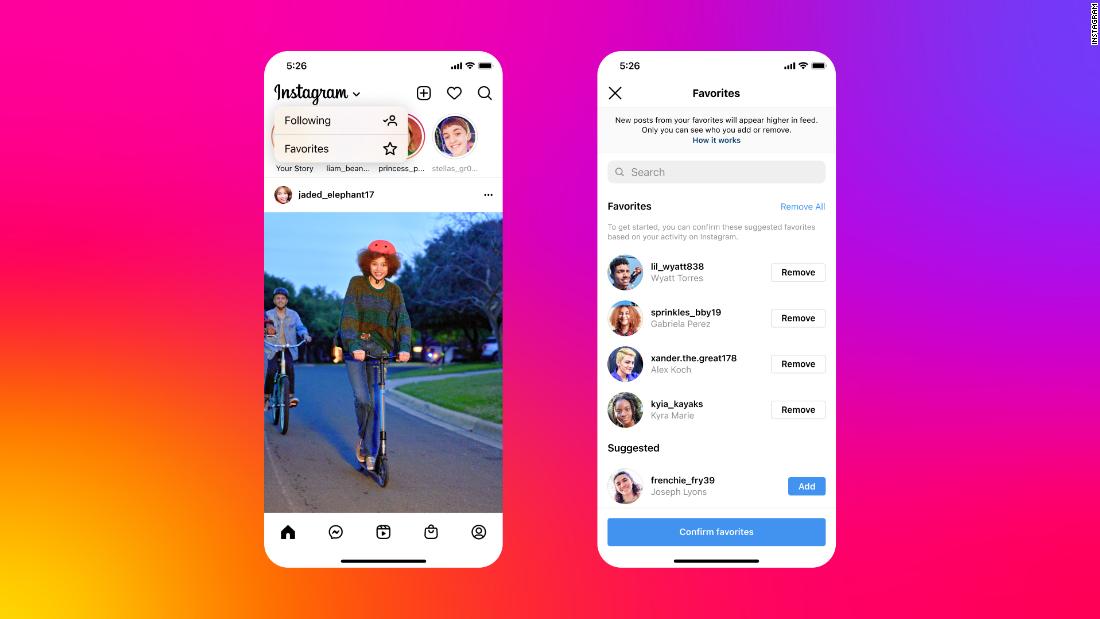 The new option, which rolls out to users globally on Wednesday, was first teased by Instagram head Adam Mosseri during a Senate hearing last year about the impact the platform has on teens. At the time, the move appeared to address concerns over how algorithms sometimes push younger users into harmful rabbit holes that can impact their mental health.

Instagram said Wednesday that users will be able to select from two new ways to display posts in their feed in reverse chronological order. The first, and most familiar to those who used social apps before the rise of algorithmic feeds, is a Following tool that highlights posts from the people the user follows in the order the posts were shared.

Instagram will also offer a Favorites feature that shows the latest posts from a list of specific accounts, such as closest friends and favorite creators. Users can add up to 50 favorites, and posts from these accounts will show up higher in their home feeds, as indicated by a star icon. People are not notified when they are added or removed from those lists.

“We’re always working on new ways for people to have more control over their experience on Instagram, and giving you ways to quickly see what you’re most interested in is one example of those efforts,” a spokesperson for Meta, which owns Instagram, told CNN Business.

As with its corporate sibling Facebook, which also offers a reverse chronological option, users will have to opt into the feature if they want it.

“We know from research that people have a better experience on Instagram with a ranked feed, so we will not be defaulting people into a chronological feed,” the company said in a statement. (Instagram ditched the reverse chronological feed in 2016.)

The change comes nearly six months after Facebook whistleblower Frances Haugen leaked hundreds of internal documents, including some that showed the company was aware of the ways Instagram can damage mental health and body image, particularly among teenage girls. US lawmakers grilled executives from Facebook and Instagram in hearings on these and other details from the documents, and Instagram paused a plan to release a version of Instagram for kids under age 13.

Instagram has since rolled out a handful of safeguards aimed at protecting its young users, including a tool called Take a Break, which it claims will encourage people to spend some time away from the platform after they’ve been scrolling for a certain period. It also said it will take a “stricter approach” to the content it recommends to teenagers and will actively nudge them toward different topics, such as architecture and travel destinations, if they’ve been dwelling on any type of content for too long.

Earlier this month, Instagram introduced a new educational hub for parents and a tool that allows them to see how much time their kids spend on Instagram and set time limits.