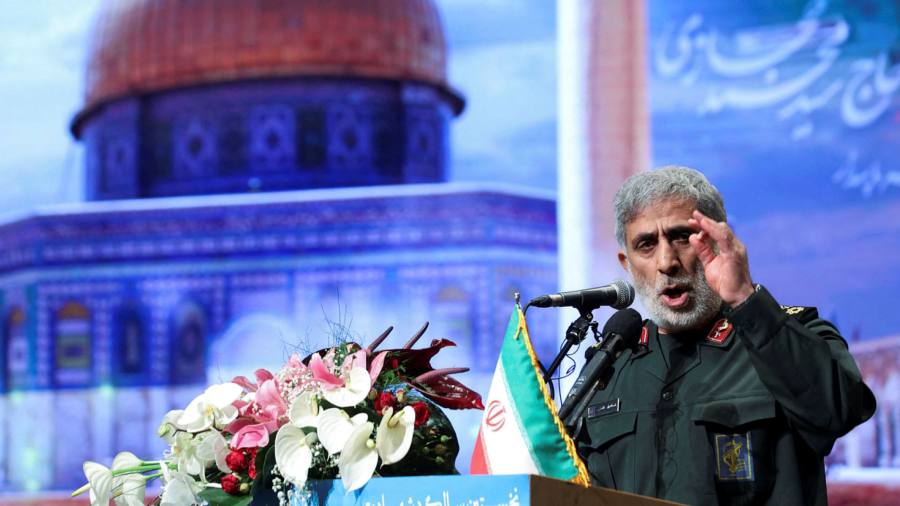 The head of the Quds Force, the elite branch of Iran’s Revolutionary Guards, has vowed to continue “leading” militias across the region at a time nuclear talks have stalled because of the force’s terrorist designation by the US.

In a strong speech to supporters in Tehran on Thursday, Brigadier General Esmail Ghaani said his Quds Force would continue to back any anti-US and anti-Israel movement in the world.

“The. . .[US]and the Zionists should know that this path is our definite path, ”Ghaani said in a ceremony attended by the most senior commanders of the guards, to which foreign media were also given rare access.

“The Islamic revolution [of Iran] knows how to guide young, motivated Muslims to defend themselves, ”he said, adding that all Islamic militias would“ undoubtedly ”enjoy Iran’s support.

The US has designated the Quds Force a terrorist organization since 2007 and went further in 2019 by adding the entire Revolutionary Guards to its list. The expeditionary force is fundamental to Iran’s ideology and security strategy to prevent the US from expanding its presence in the Middle East.

The Islamic republic has established a network of proxies across the region, creating an unprecedented swath of influence that stretches from the Gulf to the Mediterranean notably in Lebanon, Iraq, Syria, Yemen and Palestine.

The US and its regional allies accuse Tehran of backing armed groups to stoke instability and conflict. Donald Trump, former US president, ordered the assassination of Qassem Soleimani, the charismatic commander of the Quds Force, in Baghdad in 2020. Ghaani replaced Soleimani.

Diplomatic efforts to revive the 2015 nuclear deal with world powers have become deadlocked after Iran’s demand to remove both the guards and its Quds Force from the terrorist list before it rolls back its nuclear advances, analysts say.

Ghaani’s speech came a day after the US Navy’s Fifth Fleet announced it was establishing a new multinational task force to focus on countering arms smuggling, drug and people trafficking in the Red Sea, the Bab al-Mandeb and the Gulf of Aden, vital waters surrounding Yemen.

The US Navy has led multinational maritime task forces in the region for two decades. But Commander Tim Hawkins, a spokesman for the Fifth Fleet, which is based in Bahrain, told the Financial Times that the US was “restructuring the multinational partnership to bring to bear a more focused, co-ordinated effort among partner navies”.

The task force would be used for “detecting, deterring and disrupting destabilizing activity,” he said.

The formation of the task force comes after pressure on the US from the United Arab Emirates to strengthen and institutionalize security co-operation to counter the threat of the Iranian-backed Houthi movement in Yemen.

Relations between the UAE and the US hit a low this year after Emirati leaders were angered by what they considered to be Washington’s tepid response to a string of missile and drone attacks on Abu Dhabi, the Gulf state’s capital, in January and February. Saudi Arabia has also been seeking more US support to counter the Houthis, which regularly fire missiles and drones into the kingdom.

Saudi Arabia and the UAE have been fighting the Houthis since Riyadh formed an Arab coalition in 2015 that intervened in Yemen’s civil war after rebels ousted the government. The Gulf states and the US accuse Iran of supplying the Houthis with missile and drone technology and advising and training the rebels.

Ghaani said the Houthis, whom he called “the new children” of the Islamic Republic, were making missiles with a range of more than 1,000km. “In their basements under bombardments, they are making missiles themselves,” he said.