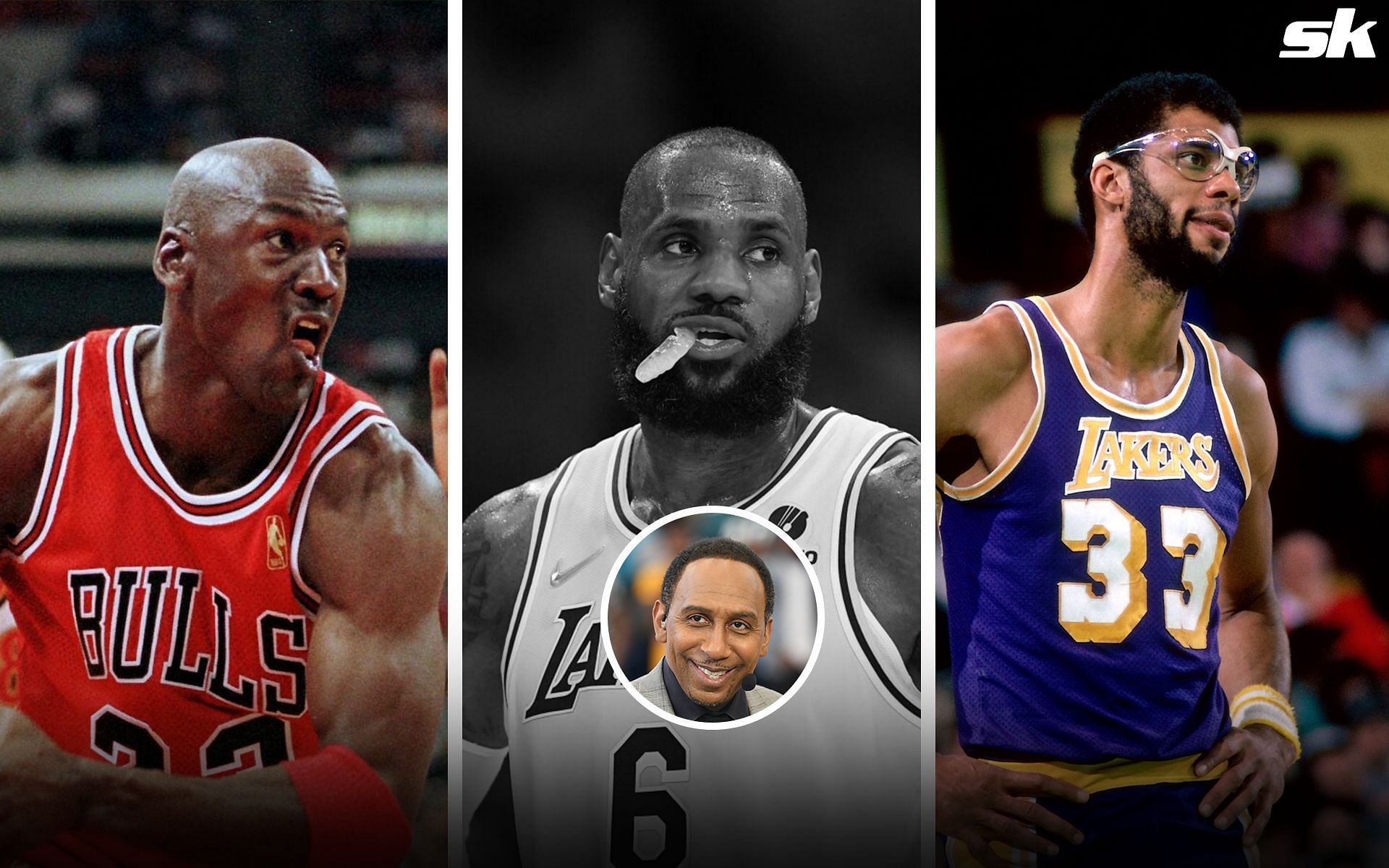 ESPN analyst Stephen A. Smith presented an argument for LA Lakers legend Kareem Abdul-Jabbar to be the second-greatest player of all time. He put LeBron James as third on that list. He chose Michael Jordan in an instant as his No. 1 choice, calling the decision “Easy.”

On “The Tonight Show Starring Jimmy Fallon,” Fallon asked Smith to play the game called “Wheel of Opinions.” A random generator selected the topics. One of the subjects was the NBA’s evergreen debate topic “GOAT: LeBron or Jordan.”

“Easy. Michael Jordan,” Smith said. “Easy. Easy. But you know what the difficult part is? Is LeBron No. 2 or No. 3 to Kareem Abdul-Jabbar being No. 2?”

The question specifically asked between Jordan and James, but Smith brought up Abdul-Jabbar. He instantly picked His Airness and did not even bring it up for discussion as everyone unanimously agreed on his choice.

However, he believes King James is not even second in argument as Abdul-Jabbar has a better resume. He said:

Abdul-Jabbar’s resume is certainly one of the most impressive ones in league history and, further, basketball history.

Abdul-Jabbar has a record six MVP awards and is the all-time scoring leader. He was the greatest college player of all time while at UCLA. With freshmen not allowed to play varsity basketball in his era, he led the Bruins to three national championships. He was a three-time national player of the year and the three-time Most Outstanding Player at the Final Four.

Abdul-Jabbar then dominated the pros as well, winning six NBA titles and two Finals MVPs (an NBA record 14 years apart) with the LA Lakers and Milwaukee Bucks. All the while, he dominated with his signature sky hook to pour in buckets. Plus, he was an 11-time All-Defensive team selection, leading the league in blocks four times.

It’s hard not to make a case that he is the second greatest player ever if one picks Michael Jordan, who also won an NCAA title, as the best.

Smith then talked about James, saying:

“LeBron James is phenomenal. He’s on the Mount Rushmore of basketball. He’s all that and a bag of chips. But he did lose six NBA Finals, and he’s the star on a team that is presently 18 games below .500.”

One of the biggest blemishes on James’ resume is his finals losses. He has been to 10 finals, which is impressive in and of itself. But his six losses at the biggest stage of the game are often used against him in the GOAT argument.

As GREAT as LeBron James the player has been this year, I can not say the same about LeBron the GM. This Lakers season ends all GOAT discussions TO ME !!!

As GREAT as LeBron James the player has been this year, I can not say the same about LeBron the GM. This Lakers season ends all GOAT discussions TO ME !!! https://t.co/OpKV0GB7Bx

James is also facing scrutiny for his current season with the LA Lakers (33-49). He led the league in scoring until his injury but the Lakers did not even make the NBA play-in tournament. They finished 11th in the West, which is certainly a huge tarnish on King James’ legacy. It’s the second time in four seasons with James that the Lakers had a losing record.

Kareem Abdul-Jabbar and LeBron James have a weird relationship. Both share the LA Lakers connection and the pride of the Purple and Gold but do not always see eye to eye. Jabbar has often criticized James for his actions such as a shot celebration or postgame comments. He recently scorned James for not picking a stance on social justice issues. As reported by ESPN’s Dave McMenamin, the six-time NBA champion said:

“Some of the great things that he’s done, he’s standing on both sides of the fence almost, you know? It makes it hard for me to accept that when he’s committed himself to a different take on everything. … It’s hard to figure out where he’s standing. You’ve got to check him out every time. “

Many famous analysts such as Skip Bayless, Stephen A. Smith and others called out Abdul-Jabbar for his words. Bayless dismissed the entire statement and called him “completely out of touch,” while Smith respectfully disagreed with the Lakers legend.

Kareem Abdul-Jabbar criticized James for his actions that have hurt the Black community, and many fans disagree. James has been outspoken against injustices to the African-American community, so not many resonated with Jabbar’s sentiments about James.

Eventually, Abdul-Jabbar realized that he was wrong about the LA Lakers star and he apologized.

“It was not my intention to criticize LeBron in any way. He has done so much for the Black community as well as for the game of basketball. We may not always agree, but I want to wholeheartedly apologize to LeBron and make it clear to him that I have tremendous respect for him. And if he can accept that, I’ll be very happy. “

Q. Who is 2nd all time after Michael Jordan?