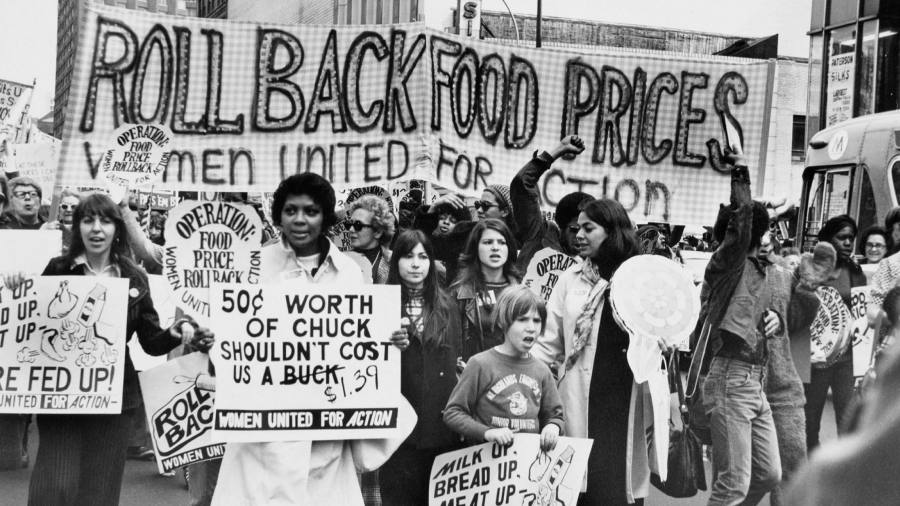 For the past year, politicians and policymakers have watched the rising inflation on both sides of the Atlantic with growing disquiet. Rapidly increasing prices are the unavoidable result of the pandemic, they have said, before adding that at least the situation is nothing like the disastrous inflation of the 1970s.

They need to have a closer look at the evidence. Consumer price inflation in March hit a fresh 40-year high of 8.5 per cent in the US this week and a 30-year high of 7 per cent in the UK. It has two main causes, and bears many similarities to the first oil shock of late 1973, when Opec states enforced an oil embargo against countries supporting Israel in the Yom Kippur war.

Then, as now, both the US and UK labor markets were showing signs of excess demand. America’s unemployment rate fell to 3.6 per cent in March, only one-tenth of a percentage point higher than its lowest rate in over 50 years, allowing employees to bid up wages to an annual increase of 5.6 per cent. In the UK, the latest labor market figures this week showed an unemployment rate of 3.8 per cent, the lowest since 1973, an all-time record for the number of job vacancies. Total pay rose annually by 5.4 per cent.

Compounding domestic excess demand in labor markets is a global supply shock, raising the price of fuel and energy. In the mid-1970s, the cause was a powerful cartel of oil producers seeking to punish the west. This time round, the culprits are stretched supply chains resulting from the lasting effects of the pandemic alongside a widespread desire to limit gas purchases from Russia.

Adding to these global constraints on supply are signs of a lasting domestic hangover from Covid in the labor market, which has reduced the numbers of people ready and willing to work in both the US and UK.

Inflation in the US and the UK is therefore both a demand-pull and a cost-push phenomenon, just like it was in the 1970s, requiring us all to relearn the lessons of that decade.

The first, which has been a painful experience for President Joe Biden, is that there can be nasty economic and political consequences of running a high pressure economy. Stimulating demand was thought to be a policy with few downsides because it would increase employment, re-engage the marginalized with the labor market and raise real wages.

But we have come to relearn that excessive fiscal and monetary stimulus alongside rapidly growing employment and nominal wages do not make middle-class Americans better off in aggregate if prices rise faster than incomes. Worse, those that are poorer give you no credit for helping other people into work if their struggles mount. Despite the UK’s extremely strong labor market, real household disposable incomes are on track this year to suffer their largest fall since comparable records began in 1956.

The second lesson was reiterated by one of the founding fathers of the European single currency this week. Criticizing the European Central Bank for being too slow to increase interest rates, Otmar Issing noted that the Bundesbank was by far the most successful in the 1970s when it acted decisively to bring inflation down and West Germany suffered only a mild downturn. “The Fed waited too long,” he said, resulting in “double-digit inflation and a deep, deep recession.” The UK authorities made even greater mistakes.

Given the history and the current circumstances of excess demand, it is evident that the Federal Reserve and the Bank of England need to tighten monetary policy considerably, removing much of the stimulus that currently exists. The difficulty, as Issing himself noted, was knowing how much to remove and how quickly.

The global supply shock element of higher energy, fuel and food prices will naturally reduce domestic demand, and by more in countries, such as the UK, which are net importers of these products.

Sadly, this brings us to the third and final lesson of the 1970s. Calibrating policy as successfully as the Bundesbank did back then is extremely difficult and will require as much luck as judgment.

The risk of recession on both sides of the Atlantic is now very high. Perhaps it is already too late, the inflation genie is out of the bottle and monetary policy needs to generate a recession to drive it out of the system. Alternatively, policymakers will be too cautious, too slow and allow inflation to persist and embed itself in the economy with the same ultimate consequences.

The path we all desire is narrow and sits in between these economic disasters. It is possible we will eradicate high inflation without a deep economic downturn, but the odds on this favorable outcome are now low indeed.