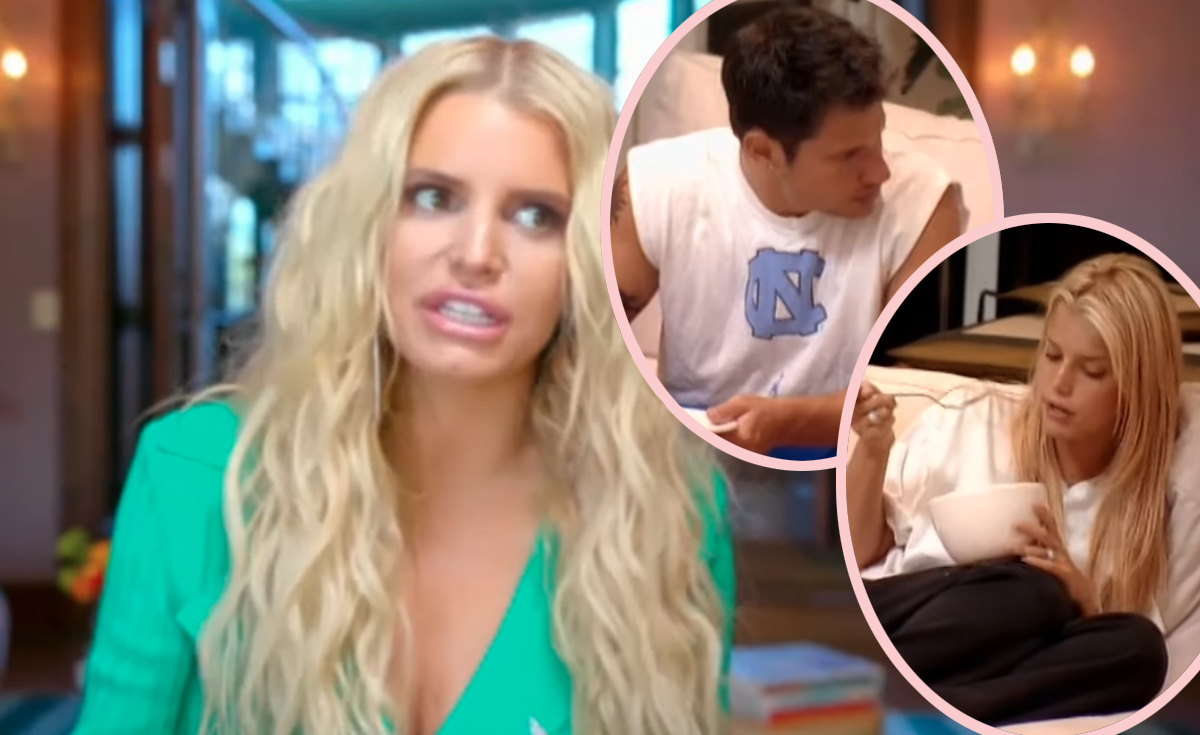 In case you have not heard, Jessica Simpson is living her best life!

After getting sober, getting back in killer shape, and reclaiming 100% of her billion-dollar fashion brand, she’s on top of the world. So it makes sense she does not have time for regrets! Not even having to deal with her ex, Nick Lachey.

In a candid interview on The Real this week, the 41-year-old was asked if she regrets starring in a reality show with her ex, Newlyweds: Nick and Jessica. She replied confidently:

“No, I do not regret that at all. I mean, if anything, it was great TV. It was very real, and Nick and I actually had a lot of fun. ”

So wild to hear her talk about the fraught relationship so… well, wistfully? It certainly is not how Nick’s next bride Vanessa Lachey looks back on that time…

Related: Vanessa Opens Up About How Nick’s Messy Divorce Nearly Destroyed Their Relationship

But Jess says in their two years and three seasons on the show, they “got to do a lot of things” they would not otherwise have been able to, and all on MTV‘s dime. And it was a smart move for the network, the savvy businesswoman points out:

“There were definitely, like, moments where it was like, ‘Put Jessica out here in the wilderness and you’ll get good TV.'”

OK, so if Jessica does not regret the infamous “is this chicken” moment, the most well-known gaffe in reality TV history, does she regret anything in her life? Well, no! She told the ladies:

“I never have. Well, I learn from it. There’s a lesson in everything. ”

So healthy! But that does not mean she’d ever go back to those days, either! Asked if she’d do another reality show, her immediate reaction was:

But thinking for a moment she did note:

“Well, I mean, reality’s set up so different now. Ours was actually very real and very, like, authentic. But maybe because it was one of the first. But we had a mic pack on from when we woke up to when we went to sleep. Nowadays, like, they have allotted shooting days and that type of thing and it would make it a lot easier. ”

She still knows all about how reality TV is filmed because her daughter Maxwell is besties with Kim Kardashian‘s daughter North West. So she’s heard all about how it’s changed over the years:

“My daughter is best friends with North. So, I’ve had to talk to Kim and be like, ‘How in the world do you guys do it?’ ”

As amazing as Jessica is, she does not think she could do what Kim does:

“She is unbelievable. She’s a beast. She’s an incredible mother. She’s really open and you know she just is awesome. And North and Max together are great. ”

Awww! See the full interview (below)!

While she was there, the hosts just had to ask about the fantastic bikini pics Jess shared after her impressive 100-lb weight loss.

She said the key is not to aim too far down the road at the than goal, but rather find success by “setting small goals for yourself.” She explained:

“Being in a bikini was never the main goal. I mean, I did that in my 20s. And I literally brought bathing suits on that trip without trying on a bikini because I thought I was just going to be in a one-piece. So when I put that two-piece on, I got super emotional. And I was like, ‘I did this. It happened. ‘ It was just, like, in the moment and I wanted to share it with everyone because I was very proud of myself for doing what at times felt completely impossible. ”