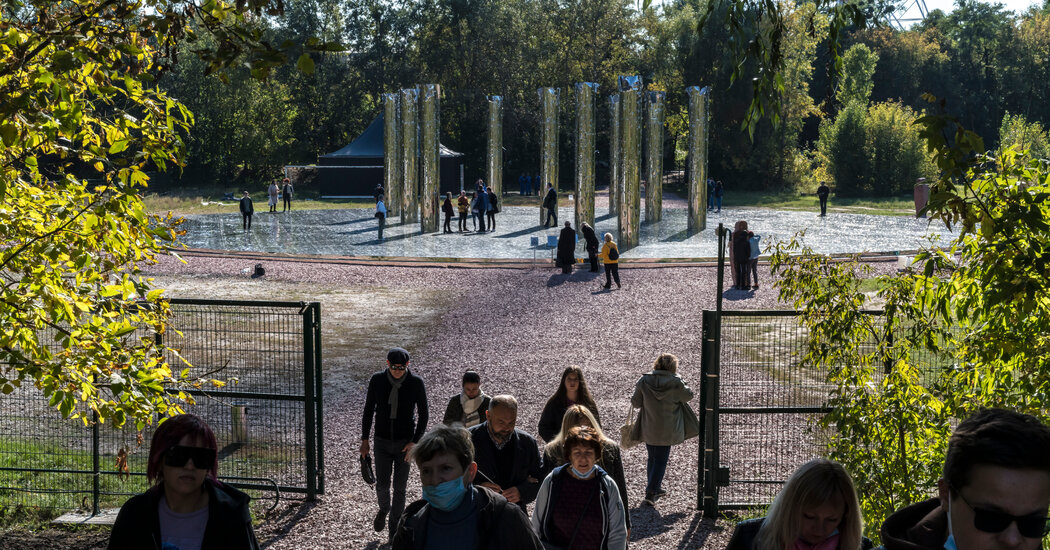 Jewish groups and institutions around the world condemned a strike in Ukraine’s capital, Kyiv, in the area of ​​the Babyn Yar Holocaust Memorial Center, where tens of thousands of Jews were killed by the Nazis in a two-day massacre during World War II.

It was not clear to what extent the memorial was damaged by the strike. The memorial is close to Kyiv’s main radio and television tower in Kyiv, which was hit by a projectile. President Volodomyr Zelensky of Ukraine said at least five people were killed in the area.

Mr. Zelensky, who is Jewish, also alluded to the site’s history, saying on Twitter“What is the point of saying ‘never again’ for 80 years, if the world stays silent when a bomb drops on the same site of Babyn Yar?”

On Facebook, the Babyn Yar Holocaust Memorial Center said that Russian forces had struck the site but did not describe whether there was damage.

Natan Sharansky, the chair of the memorial’s advisory board and a former Soviet dissident, said in the statement that President Vladimir V. Putin of Russia had sought “to distort and manipulate the Holocaust to justify an illegal invasion of a sovereign democratic country” and called the move “utterly abhorrent.”

Mr. Sharansky added: “It is symbolic that he starts attacking Kyiv by bombing the site of the Babyn Yar, the biggest of Nazi massacre.”

In remarks last week, Mr. Putin said the Russian military operation would aim for the “demilitarization and denazification of Ukraine,” and called Ukraine’s leaders “neo-Nazis.”

More than 33,000 Jews were killed at the site over a two-day period according to historians. In addition, mass shootings, including of Roma people and Soviet prisoners of war, took place there throughout the war.

Yad Vashem, the Holocaust memorial museum in Israel, called for the site to be preserved, saying it had “irreplaceable value for research, education and commemoration of the Holocaust.”

“Rather than being subjected to blatant violence, sacred sites like Babi Yar must be protected,” it said in a statement.

Russian convoy. Satellite images show a Russian military convoy stretching 40 miles long on a roadway north of Kyiv, with a number of homes and buildings seen burning nearby. Experts fear the convoy could be used to encircle and cut off the capital or to launch a full-on assault.

Migration wave. At least 660,000 people, most of them women and children, have fled Ukraine for neighboring countries, according to the UN refugee agency. It’s the most intense wave of European migration since at least the 1990s.

Yair Lapid, Israel’s foreign minister, said on Twitter that the country would help with repairing damage to the memorial.

The massacre at Babyn Yar, also known as Babi Yar, took place in late September 1941. Soon after the German army entered Kyiv, the city’s Jews were told to gather near a train station in order to be resettled. Crowds were forced to undress and gather in a ravine, where they were shot. The Nazis wiped out nearly the entire Jewish population of Kyiv over the course of the war.

Last year, on the 80th anniversary, Mr. Zelensky unveiled a modern art installation at the site. Peter Hayes, a professor emeritus of Holocaust studies at Northwestern University, said that it only started to become a more formally recognized landmark since Ukrainian independence in 1991.

“The Soviets for a long time did not want to acknowledge that the victims were almost exclusively Jewish, and rather kept referring to it as a place where Soviet citizens had been massacred and so forth,” he said.