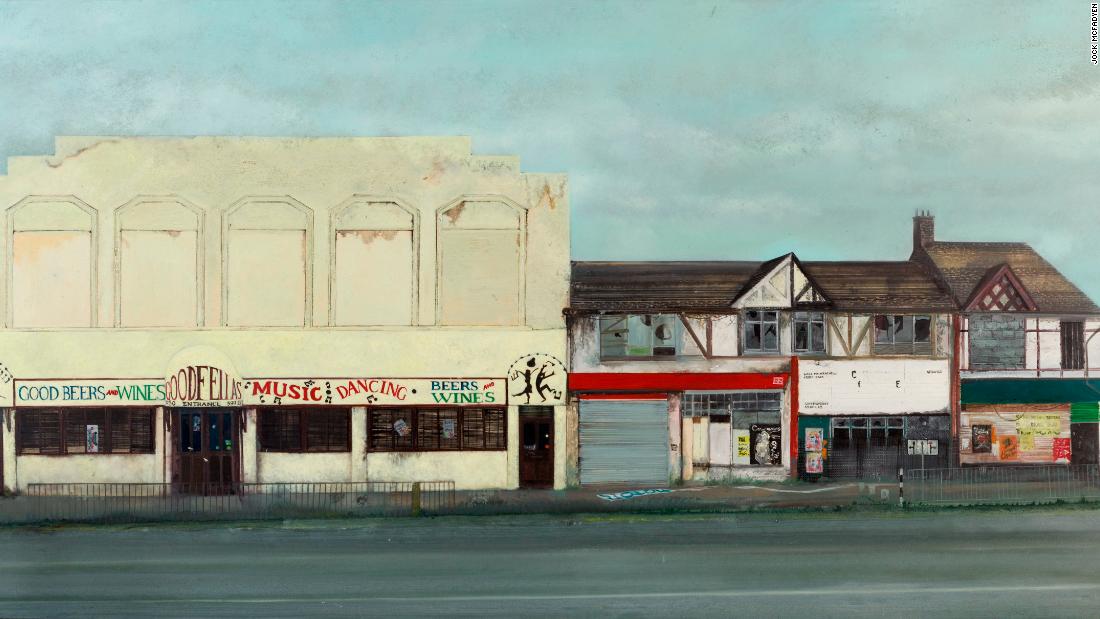 Tucked away down a back street in one of London’s surviving artist quarters, Jock McFadyen’s studio is just off the popular London Fields park in the city’s East End.

The space faces railway arches and a car repair shop, but the flow of industrial units is interrupted just a few steps down the road by an organic bakery and an upscale wood-fired restaurant, catering to the young professionals that have flocked here in recent years .

In a way, the row encapsulates this extremely gentrified part of town, which has changed dramatically since McFadyen arrived in 1978. “The East End, in those days, was very poor. And there were lots of artists, because of the warehouses and studio space. The landscape has changed radically, “he says.

The ground floor is full of motorbikes, which McFadyen, born in Scotland in 1950, still rides every day. His most prized possession is a 1966 Honda Super Hawk 250cc. He bought it on eBay just a few years ago when he spotted the license plate, realizing it was the very same bike that he owned as a teenager and once drove down to Hyde Park to see The Rolling Stones play in 1969.

Upstairs, where McFadyen works, one wall is dominated by a huge unfinished painting of a skateboard park, as well as about a dozen smaller paintings he’s currently working on. The majority of his works, however, aren’t here, rather split across two exhibitions: a retrospective at The Lowry near Manchester, which is about to end, and a new show at the Royal Academy of Arts in London, which just opened.

The London show is called “Tourist without a guidebook,” a riff on a remark by Tom Lubbock, the art critic who wrote the catalog for his 1991 exhibition, “Fragments of Berlin,” about the Berlin Wall post-1989.

“He described me as a ‘sightseer without a guidebook,’ and I realized that he actually nailed my attitude to painting: to have no agenda, but just to be drawn like a magpie to things, without really having an intellectual premise. It’s like a statement of intent. “

The paintings in his new exhibition offer a compelling mix of realism and abstraction. In one, an apartment block is reproduced to near-blueprint precision, accounting for the exact number of floors and windows; in another, the platform of a London underground station becomes an almost symbolic array of squares, interrupted only by hanging cables and a no smoking sign.

“If you want things to emerge, you have to be intuitive and keep the door ajar,” McFadyen says about his process. “You do not quite know why you’re drawn to something, and it’s the painting that will tell you, eventually – years later, maybe.”

He offers an example with “Goodfellas,” a 2001 painting depicting a drab nightclub named after the Scorsese film, next to an abandoned building. “About 20 years later, I do not know why, I’m doing these strange nightclub paintings. There are these women at a bar, with the actor Harvey Keitel and a Swiss landscape, like a scene from a movie. And then I started making these other strange ballroom pictures, one of which is in the exhibition, and I realized that I’m painting the people I imagined might be in that nightclub. ” (Although Harvey Keitel is not in “Goodfellas,” he appears in several other Scorsese movies.)

This nightclub in Dagenham, East London, would later inspire McFadyen to return to figure painting, which he had more or less left behind in favor of landscapes since the 1990s. Credit: Jock McFadyen RA

The show features 18 works, from the 1990s to today, focusing on the East End and broadly sketching its evolution over the past three decades. But McFadyen does not want to be pigeonholed as a genre painter of East London: “It’s not my subject. It just happens to be there when I wake up every day, that’s all. You can not be everywhere at once,” he says.

With a heavy presence of graffiti, railways, litter, barbed wire, construction sites, social housing and dilapidated buildings, this is not the London you find on postcards. “I could not paint a picture of Piccadilly Circus or the Royal Academy or Buckingham Palace. It’s not possible. I can only paint what’s left – the residue and the landscape, because it’s there. So, it needs to be painted.”

Many of the landscape works are very large, almost 12 feet in length – great for an exhibition, but tricky for a private sale (a buyer would also need upwards of $ 100,000 to take one home). “I do not sell many of this size,” McFadyen says. “But when I do, I’ve got enough money for two years.”

“Tourist without a guidebook” is at London’s Royal Academy of Arts from February 5 to April 10, 2022.