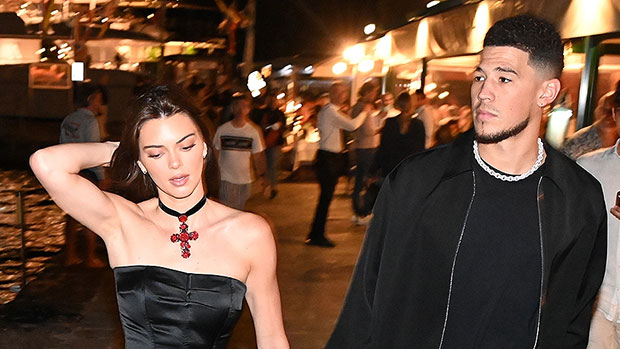 Love is in the air not just for Travis Barker46, and Kourtney Kardashian43, but for Kendall Jenner26, and boyfriend of two years, Devin Booker, 25! The supermodel and NBA player were photographed walking hand-in-hand to dinner in Portofino, Italy with the rest of the Kardashian-Jenner clan on May 20 ahead of Kourtney and Travis’ Italian wedding. Kendall stunned in a black strapless dress with a silk corset-like bodice and sheer skirt. She paired the dress with black high-heeled sandals and a black choker necklace with a large red cross hanging from it. Meanwhile, Devin also wore an all-black ensemble consisting of black dress shoes and pants, a black tee, and a black lightweight zip-up jacket. He completed his look with a short silver chain necklace.

The paparazzi snapshots are rare for the couple, as they are notoriously private. In fact, even after two years of dating, they have yet to make their red carpet debut. While fans thought they might do so at the 2022 Met Galaan insider EXCLUSIVELY told HollywoodLife that such public appearances do not excite them. “When it comes down to it, Kendall feels like one of the major reasons that she and Devin have worked so well is because of the fact that they’re both very private when it comes to their relationship,” the source noted. “Kendall has seen her sisters deal with the consequences of having their romantic lives out in the spotlight, and that’s the furthest thing from what she wants for herself. Neither one of them feels the need to put things out there in public just to have it criticized. ”

It is not clear which restaurant they were headed to, but several other members of the famous family were spotted along with them. Kylie Jenner, 24, stepped out in a black Dolce & Gabbana mini dress she accessorized with a black and white purse and knee-high boots. Khloe Kardashian, 37, wore a skin-tight, ankle-length leopard print gown that allowed her lace black bra to peek out at the top. Lawyer-in-training Kim Kardashian, 41, rocked a dark gray two-piece set. Her skin-tight boots and pants were one-in-the-same and were extremely high-waisted. Her top was an off-the-shoulder bra top with a crisscross detail above her chest. Finally, Kris Jenner, 68, opted for a black mini dress with a black lace overlay that reached just below her knees. Kylie, Kim, and Kris did not appear to have their significant others with them. Several kids were photographed at the dinner, including North West8, Alabama Barker16, and Kourtney’s children: Mason12, Penelope9, and Reign Disick7.

The stars of the night, Kourtney and Travis, looked rested and ready for their big weekend. Kourtney wore a glamorous sheer red gown paired with a red fur shawl. Travis wore an all-black ensemble which included an open jacket that showed off his stomach and chest tattoos. The couple was spotted earlier in the day riding a boat around the waters of Portofino with Alabama. They both donned head-to-toe black outfits.

Kourtney and Travis’ wedding is scheduled to take place at a 13th-century waterside castle, Castello Brown, per TMZ. They legally tied the knot at a Santa Barbara courthouse on May 15 with no family present except for Kris’ mother, Mary Jo Campbell. Congratulations to the happy couple!