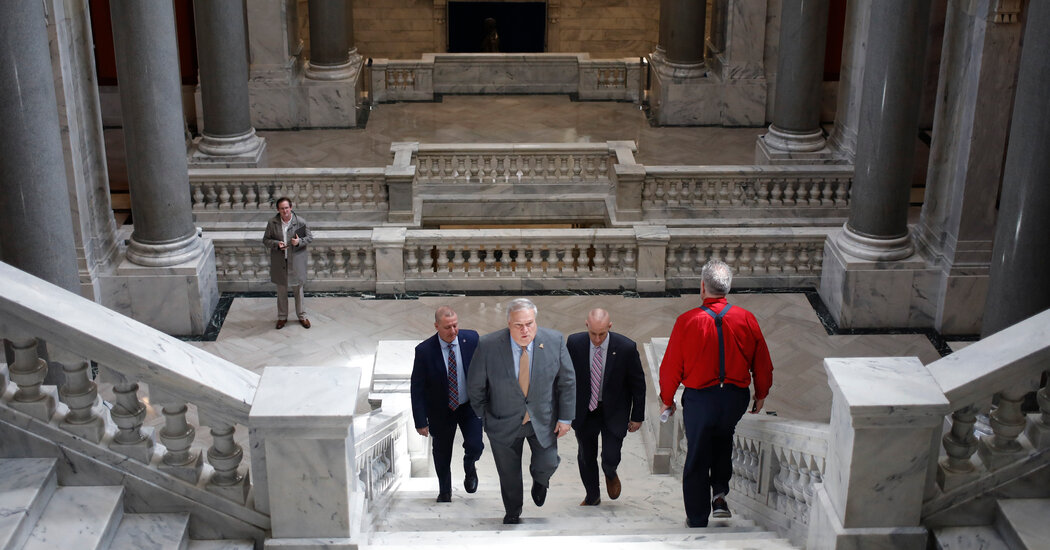 The Republican-controlled legislature in Kentucky passed sweeping legislation this week that would make abortion illegal after 15 weeks of pregnancy and grant no exemptions in cases of rape or incest.

The legislation, which resembled a restrictive Mississippi law that is being reviewed by the U.S. Supreme Court, folded together half a dozen bills that were introduced by Republicans in the State House and Senate.

Opponents of the bill, passed on Tuesday, said the legislation is even more restrictive than measures passed in Mississippi, Idaho, Florida and Texas and could effectively end abortion in Kentucky, where there are two abortion providers for the entire state.

“That’s not hyperbolic,” said Tamarra Wieder, the state director of Planned Parenthood Alliance Advocates, in an interview on Wednesday. “When the bill becomes law we are going to have to cease our abortion services.”

The legislation was approved one week after Arizona passed similar legislation banning abortion after 15 weeks. Gov. Doug Ducey of Arizona, a Republican, signed the measure into law on Wednesday. In doing so, he said, the state has affirmed “Arizona’s commitment to protecting the lives of preborn children.”

Max Wise, a Republican senator in Kentucky who sponsored the Senate version of the bill, said the legislative measures “show the strength of the pro-life movement in this Commonwealth.”

The legislation “will help take the necessary steps to value the sanctity of life and protecting the unborn,” he said in a statement.

Opponents of the bill in Kentucky have called on Gov. Andy Beshear, a Democrat who has expressed support for abortion rights, to veto the legislation. His office referred a request for comment to a March 14 briefing with reporters, when he was asked about the bills.

“I believe that health care decisions should be between a patient and their doctor,” Mr. Beshear said. He said a bill that would force a young teenage girl “impregnated by a violent act” by a relative to potentially get permission from that person to seek options as “extreme.”

“That’s pretty wrong, and I think most Kentuckians do not agree with that,” he said.

“We easily have the votes to override his expected veto,” he said in his statement.

The votes followed weeks of intense debate by legislators as well as opponents and supporters of the bill.

During one hearing over the Senate portion of the legislation, Karen Berg, a Democrat in the State Senate and a diagnostic radiologist, called the bill a “medical sham.”

“It does not follow medicine. It does not even purport to listen to medicine, ” she said. She said legislators were “putting a gun to women’s heads.”

“Abortion will continue,” Dr. Berg said. “Women will continue to have efficacy over their own body, whether or not you make it legal.”

The legislation passed in the House 74 to 19. The Senate passed the bill 29 to 0, with seven of the state’s eight Senate Democrats walking out in protest rather than voting.

Addia Wuchner, the executive director of Kentucky Right to Life, which helped draft the legislation, said she was “very pleased to see the bill move forward.”

She said the legislation would establish “best practices for women’s health.”

Ms. Wuchner, a licensed registered nurse and a former Kentucky state representative, said the goal of the legislation is not to end abortion but “to make sure women have access to all the health care they need.”

For example, she said, the bill requires women who want an abortion to get a blood test to determine whether they are Rh negative, which can lead to runaway immune reactions in Rh-positive babies born to Rh-negative mothers. Under the bill, a woman who tests negative would receive an injection of Rh immunoglobulin to avoid complications and miscarriage in future pregnancies, Ms. Wuchner said.

But Ms. Wieder said that such requirements are a “red herring” because abortion providers in the state provide that shot if necessary.

“We are already providing standard, quality care,” she said.

Instead, Ms. Wieder said, the legislation puts in place an onerous certification process on pharmacists that would make it virtually impossible for them to provide medically-inducing abortion medication.

The legislation would also require that fetal remains from abortions or miscarriages be cremated or buried. That requirement means that abortion providers would need to contract with a funeral home willing to have fetal tissue removed during an abortion, Ms. Weider said.

“We have not been able to find funeral homes that would work with us,” she said. “And in this environment we do not expect to.”

On Tuesday, opponents of the measure briefly disrupted the Senate session in an attempt to stop the vote, screaming from the balcony at legislators. “You’re killing women,” one of them yelled.

After the vote, protesters gathered in the statehouse, holding pink placards that read, “Keep safe, legal abortion,” and chanting, “Bans off our bodies.”

The ban would make exceptions in cases of a medical emergency that “so complicates the pregnancy” an abortion is required, according to the legislation.

Under Roe v. Wade, the 1973 decision that established a constitutional right to abortion, states cannot ban abortion before a fetus is viable outside the womb.

With modern medical technology, viability is possible at about 23 weeks of pregnancy. But the Supreme Court’s six conservative justices appeared willing to abandon Roe when they heard oral arguments in December about the Mississippi law, which makes abortion illegal after 15 weeks.

In the meantime, Planned Parenthood is working on ways to transport people seeking an abortion out of state for the procedure should the legislation become law, which is a near certainty, Ms. Wieder said.

She said: “It’s going to be an incredible loss to Kentuckians.”