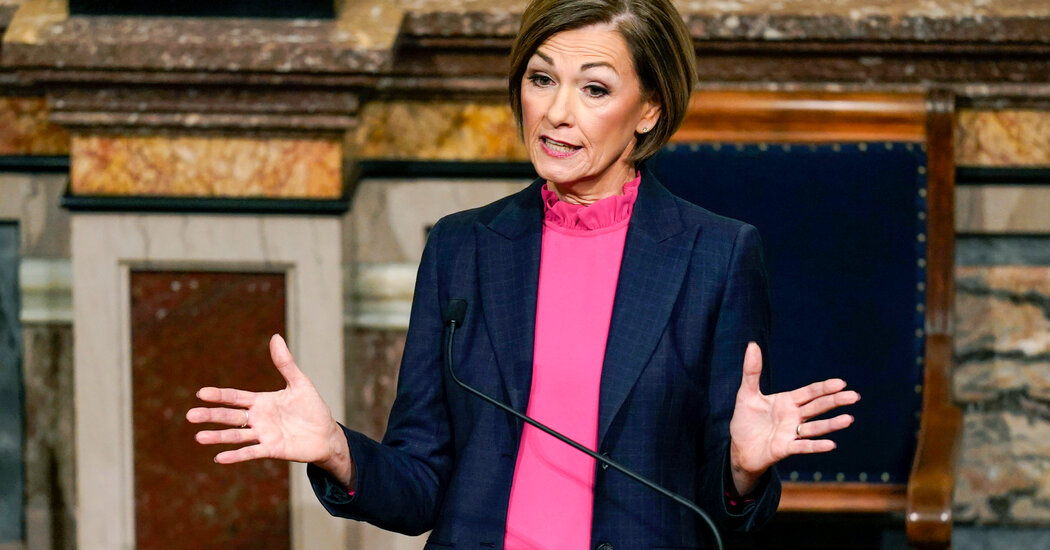 Gov. Kim Reynolds of Iowa delivered a scathing Republican rebuke of President Biden’s State of the Union address on Tuesday, casting his presidency as an unwanted remake of “That ’70s Show,” complete with “runaway inflation,” rampant crime and a rampaging “Soviet army” . ”

Ms. Reynolds, who was chosen by Republican Senate leadership to deliver the party’s official response, portrayed the populist revolt against mask mandates and remote learning as a “pro-parent, pro-family revolution,” hoping to harness the backlash ahead of this year’s midterm elections .

The governor, who has been in that office since 2017, used her address to preview themes, poll-tested and echoed by conservatives on social media, that are likely to be repeated by Republican candidates across the country as they seek to seize control of Congress two years after the party lost the White House and Senate. That included stoking fears that the Biden administration – and Democrats – want to control what children can learn in school and whether parents should have a say.

“We are tired of politicians who tell parents they should sit down, be silent and let government control their kids’ education and future,” she said.

In Iowa, Ms. Reynolds has pushed policies championed by a conservative base and motivated by opposition to government efforts to limit the spread of the coronavirus.

While that measure is currently on hold in the courts, Republicans believe that those positions will galvanize conservatives and win over some moderates who are weary of pandemic restrictions.

“Iowa was the first state in the nation to require schools to open their doors,” she said. “Keeping schools open is only the start of the pro-parent, pro-family revolution that Republicans are leading in Iowa and states across this country. Republicans believe that parents matter. ”

Ms. Reynolds hammered the Biden administration’s response to the rise in inflation, accusing the White House of elitism for initially downplaying the issue.

“The Biden Administration believes inflation is ‘a high-class problem,'” she said. “I can tell you it’s an everybody problem.”

In the eyes of her supporters, Ms. Reynolds, 62, is one of few conservatives capable of bridging the populism of former President Donald J. Trump to the party’s more calibrated effort to recapture Congress.

But to critics, Ms. Reynolds represents the contradictions and hypocrisies of a Republican establishment trying to project a moderate image while bowing to the whims of a former president who has little regard for the party’s mainstream past, or its future without him.

What fans and foes agree upon: Ms. Reynolds is one of her party’s most effective messengers, a skilled politician who has a knack for putting a folksy, heartland spin on hard-line Republican positions on abortion, guns and the pandemic.

“She’s kind of an everywoman,” said David Kochel, a Republican political consultant who worked with Ms. Reynolds on the speech, which was delivered from Des Moines. “She’s a product of small-town Iowa and the working class, a very different profile than Joe Biden.”

Whether any of this will pay off for Ms. Reynolds politically remains to be seen. The importance of Iowa as a national political force seems to be waning, with the once-critical swing state now firmly in Republican hands and the role of its first-in-the-nation caucus being openly challenged by critics in both parties.

Moreover, the post-State-of-the-Union response, while a major development in Ms. Reynolds’ career, has been as much a slippery sidewalk as a springboard for Republican up-and-comers, including a parched Marco Rubio, who was undone by a too-tempting water bottle in 2013.

Democrats were quick to dismiss her speech, portraying the governor as a die-hard Trump supporter trying to obscure her hard-right record.

In the lead-up to her remarks, they singled out her effort to claim partial credit for doling out $ 210 million in federal funding for rural broadband projects in Iowa – despite her opposition to Mr. Biden’s American Rescue Plan, which funneled hundreds of millions of dollars in pandemic relief funding to the state.

“Instead of playing politics by taking credit for President Biden’s American Rescue Plan, which she opposed, she should work with Democrats to support Iowa families,” said Zach Wahls, a Democrat and minority leader in the State Senate.