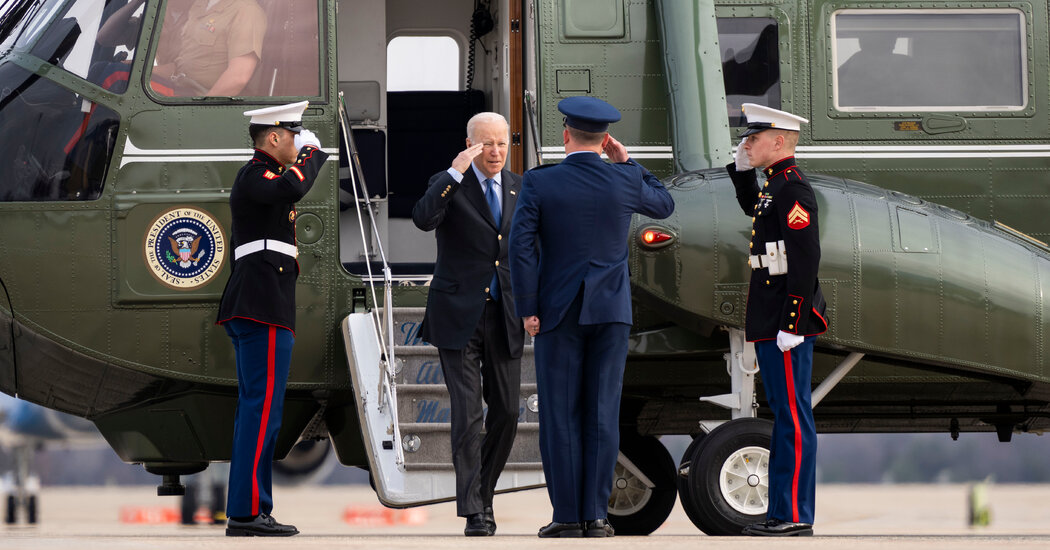 BRUSSELS – The White House has quietly assembled a team of national security officials to sketch out scenarios of how the United States and its allies should respond if President Vladimir V. Putin of Russia – frustrated by his lack of progress in Ukraine or determined to warn Western nations against intervening in the war – unleashes his stockpiles of chemical, biological or nuclear weapons.

The Tiger Team, as the group is known, is also examining responses if Mr. Putin reaches into NATO territory to attack convoys bringing weapons and aid to Ukraine, according to several officials involved in the process. Meeting three times a week, in classified sessions, the team is also looking at responses if Russia seeks to extend the war to neighboring nations, including Moldova and Georgia, and how to prepare European countries for the refugees flowing in on a scale not seen in decades.

Those contingencies are expected to be central to an extraordinary session here in Brussels on Thursday, when President Biden meets leaders of the 29 other NATO nations, who will be meeting for the first time – behind closed doors, their cellphones and aides banished – since Mr. Putin invaded Ukraine.

Just a month ago, such scenarios seemed more theoretical. But today, from the White House to NATO’s headquarters in Brussels, a recognition has set in that Russia may turn to the most powerful weapons in its arsenal to bail itself out of a military stalemate.

NATO’s secretary general, Jens Stoltenberg, underscored the urgency of the preparation effort on Wednesday, telling reporters for the first time that even if the Russians employ weapons of mass destruction only inside Ukraine, they may have “dire consequences” for people in NATO nations. He appeared to be discussing the fear that chemical or radioactive clouds could drift across the border. One issue under examination is whether such collateral damage would be considered an “attack” on NATO under its charter, which might require a joint military response.

The current team was established in a memo signed by Jake Sullivan, Mr. Biden’s national security adviser, on Feb. 28, four days after the invasion began, according to the officials involved in the process, who spoke on the condition of anonymity to discuss sensitive planning. A previous iteration had worked for months, behind the scenes, to prepare the US government for the likelihood of a Russian invasion of Ukraine.

That team played a central role in devising the playbooks of deep sanctions, troop buildups in NATO nations and arming the Ukrainian military, which have exploited Russian weaknesses and put its government and economy under tremendous pressure.

Mr. Stoltenberg, sounding far more hawkish than in the past, said he expected “allies will agree to provide additional support, including cybersecurity assistance and equipment to help Ukraine protect against chemical, biological, radiologic and nuclear threats.”

As Mr. Biden flew to Europe on Wednesday, both he and Mr. Stoltenberg warned of growing evidence that Russia was in fact preparing to use chemical weapons in Ukraine.

These are questions that Europe has not confronted since the depths of the Cold War, when NATO had far fewer members, and Western Europe worried about a Soviet attack headed into Germany. But few of the leaders set to meet in Brussels on Thursday ever had to deal with those scenarios – and many have never had to think about nuclear deterrence or the effects of the detonation of battlefield nuclear weapons, designed to be less powerful than those that destroyed Hiroshima. The fear is that Russia is more likely to use those weapons, precisely because they erode the distinction between conventional and nuclear arms.

Senator Jack Reed, a Rhode Island Democrat who heads the Armed Services Committee, said on Wednesday that if Mr. Putin used a weapon of mass destruction – chemical, biological or nuclear – “there would be consequences” even if the weapon’s use was confined to Ukraine. Mr. Reed said radiation from a nuclear weapon, for instance, could waft into a neighboring NATO country and be considered an attack on a NATO member.

“It’s going to be a very difficult call, but it’s a call that not just the president but the entire NATO Council will have to make,” Mr. Reed told reporters, referring to the governing body of the Western alliance.

“The bottom line is this is a NATO decision,” he said. Reed said. “It will not be the president’s decision alone. I do not think he’d want to take action unilaterally. “

One major issue the Tiger Team is looking at is the threshold that could prompt the alliance to use military force in Ukraine. Mr. Biden has made clear that he is enormously reluctant to do so, fearing that direct confrontation with Russia could escalate the conflict beyond control. “That’s World War III,” he noted recently.

A second team of officials, also created by Mr. Sullivan’s Feb. 28 memo, is looking at long-term opportunities for the United States to improve its geopolitical position as a result of Mr. Putin’s invasion. Inside the White House, it has become an article of faith that the Russian leader made a huge strategic mistake – one that will diminish Russia’s standing, cripple its economy and alienate potential allies for years. But it is early in the conflict, other officials caution, and that conclusion may prove premature.

The immediate concern is what Mr. Putin may do next – driven by a desire to rescue a failing military effort or re-establish his credentials as a force to be feared.

Officials believe the chances that Mr. Putin will resort to detonating a nuclear weapon are small. But Russia’s steady stream of reminders that it has its arsenal at the ready, and could use it in response to anything it perceives as an “existential threat,” has put Washington on high alert.

Mr. Biden will take up with allies “how to deal with the rhetoric and the commentary coming out of Russia on this whole question of the potential use of nuclear weapons,” Mr. Sullivan told reporters on Wednesday.

“We have not seen anything that made us adjust our posture, our nuclear posture, but it is of course something we will have to continue to stay in close consultation with allies and partners on, as well as communicate directly to the Russians.”

Several officials said the White House and Pentagon have had some tension over how much detail the Defense Department is willing to share on its highly secretive war planning – especially concerning responses to any use of nuclear weapons – even in the classified setting of the Tiger Team. (The term has been used for many years to describe an emergency task force inside the National Security Council.)

A US official said Mr. Biden remained adamant about keeping American forces out of Ukraine. But the official said the administration believed it would be misguided not to closely examine the thresholds, if any, under which the president would reverse himself, or to be prepared to deal with the consequences of the use of weapons of mass destruction.

A senior administration official said any use of a “small” tactical nuclear bomb by Russia – even inside Ukraine and not directed at a NATO member – would mean that “all bets are off” on the United States and NATO staying out of the war. But when pushed, the official declined to lay out the responses under discussion.

The official said American and NATO intelligence communities had not seen any activity by Russian military officials that suggested preparations to use a nuclear weapon. But he said that during internal discussions, administration officials were urging bail, because there was more at stake than just Ukraine.

If Mr. Putin did strike a NATO country intentionally, he would not only bring the force of the military alliance to bear on Russia, but also probably find himself facing NATO troops inside Ukraine, Artis Pabriks, Latvia’s defense minister, told reporters traveling in his country this month with Gen. Mark A. Milley, the chairman of the Joint Chiefs of Staff.

“He will get Article 5,” Mr. Pabriks said, in a reference to the NATO pledge that an attack on one alliance member is an attack on all.

“If he gets that, basically that would also make us involved in Ukraine,” Mr. Pabriks said, adding: “He has no way out of that. So I do not think he should be so stupid. “

Senator Angus King of Maine, an independent and a member of the Senate Intelligence and Armed Services Committees, visited the Polish-Ukrainian border over the weekend, meeting with officials from allied countries, visiting a refugee processing center and talking with Ukrainians. Mr. King said that as Russian forces struggle to make headway, Mr. Putin could try to strike a diplomatic agreement, intensify his bombardment of Ukrainian cities and level them, or lash out against the West with a cyberattack.

“The fourth is escalate to de-escalate, which is a tactical nuclear weapon,” Mr. King said, using the term for a Russian military doctrine in which it would employ a nuclear weapon as a warning – and then negotiate.