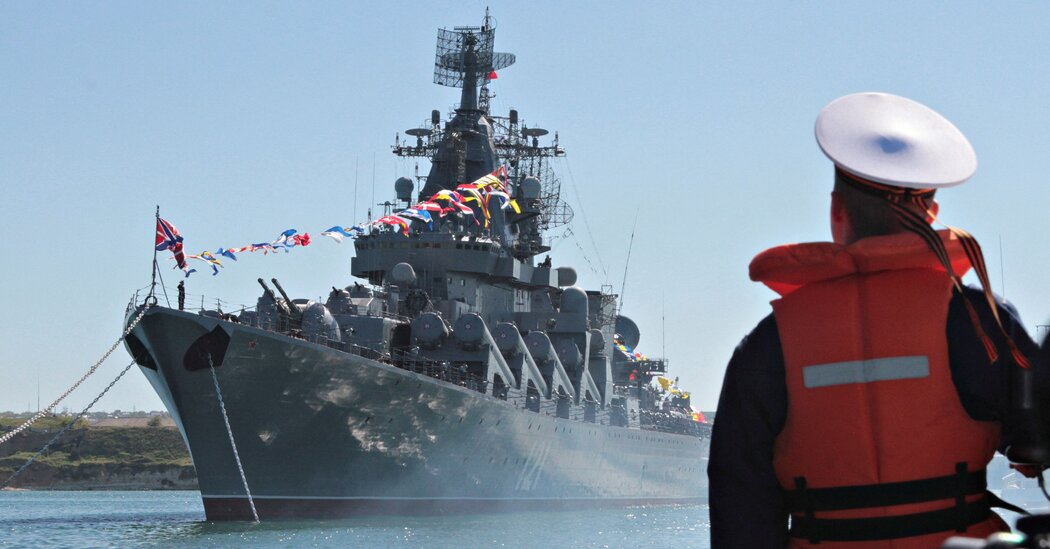 Russia’s biggest military loss so far in the Ukraine war is also becoming something of a liability for the Kremlin’s propaganda machine.

After Russia’s flagship in the Black Sea, the Moscow, sank last week, the authorities said that the entire crew of more than 500 had been rescued. But there has been no official update since, and families of missing crew members are demanding answers about their fate in increasing numbers.

“They do not want to talk to us,” Maksim Savin, 32, said in an interview about the quest to find the whereabouts of his youngest brother Leonid, 20, a conscript. “We are grieving; they drafted our little brother and most likely will never give him back. ”

At least 10 families have publicly voiced their frustration about getting conflicting reports about whether their sons are alive, missing or dead. Their demands, made on social media or to news organizations, could hurt public support for the war effort ordered by President Vladimir V. Putin of Russia.

The official silence on the fate of the Moscow’s crew is part of a larger campaign by the Kremlin to suppress bad news about the invasion and control the narrative that Russians receive on its progress. Mr. Putin has blocked access to Facebook and many foreign news outlets, and enacted a law to imprison anyone spreading “false information” about the war.

The cause of the sinking was disputed, with Russia claiming that an ammunition magazine exploded and then the damaged ship sank while under tow in rough seas. Ukraine said it hit the vessel with two Neptune missiles, an assertion that US officials corroborated. Whatever the case, the loss of one of the biggest warships since World War II has been an embarrassment for Russia.

Independent Russian news outlets based outside the country have reported that about 40 men died and another 100 were injured when the warship was damaged and sank. Those reports quoted an unidentified official and the mother of one sailor who died. In addition, the wife of an older midshipman confirmed his death to Radio Liberty, a US government network based outside Russia.

Many of the missing crew members were conscripts, a sensitive subject in Russia since the war in Chechnya, when young soldiers with little training were often thrown into battles and died in droves, souring public support for the war. “A few hundred” soldiers are still not accounted for from the first Chechen war in the mid-1990s, said Alexander Cherkasov, the former chairman of the Memorial Human Rights Center, a group based in Moscow that was disbanded this month because of a court order.

“No one cares about the soldiers,” he said, and the restrictions put on nongovernmental organizations means it is now virtually impossible for them to do the tracing work, he said.

Mr. Putin repeatedly said that conscripts who had to serve a year in the military would not be deployed in Ukraine, a statement contradicted by battlefield casualties.

The Union of Committees of Soldiers’ Mothers of Russia, which dates back to the Chechen wars, confirmed that it is receiving requests to search for missing soldiers. The organization declined to comment further, citing a law against sharing information about soldiers with foreign organizations.

Parents of crewmen on the Moskva, named after Russia’s capital, have expressed outrage at what they described as an official runaround.

“We, the parents, are interested only in the fate of our children: Why did they —being conscripted soldiers – end up in this military operation?” said Dmitry Shkrebets, whose son Yegor, 19, worked as a cook on the Moskva.

In an interview, Mr. Shkrebets was reluctant to talk further, but on Sunday he posted far harsher statements on VKontakte, the Russian equivalent of Facebook.

Initially, officers told him that Yegor was among the missing, he said.

“Guys, went missing on the high seas? !!!” he wrote. “I asked directly why you, the officers, are alive, and my son, a conscript soldier, died?”

Mr. Shkrebets has since started collecting testimony from other families who cannot locate their sons. “The more we write, the harder it will be for them to remain silent about what is happening,” he wrote on Wednesday.

Dmitri S. Peskov, the Kremlin’s spokesman, said on Tuesday that he was not authorized to release any information about missing sailors, and referred questions to the Defense Ministry.

One indication of the official position came on Sunday night, during Vesti Nedeli, the weekly news summary on state television. The three-hour show dedicated about 30 seconds to the sinking, without mentioning casualties.

Not all Kremlin mouthpieces have been quite so reticent, however. One talk-show host, Vladimir Solovyev, demanded an explanation on Saturday on how the ship was lost.

Maksim Savin said that the family could not reach any officers from his brother’s unit by phone. His mother texted one number and got a response that her son Leonid was missing.

Later the family received a series of calls from a man who seemed to have served with Leonid and who kept changing his story. First, the man said that Leonid had died while dashing to save a friend, Maksim Savin said. On the second call, he said that there had been no rescue involved, but that Leonid had been caught at the site of an explosion. The third time, he called to say that he had been mistaken, and that Leonid was missing.

“It looks like the officers are trying to make everyone shut their mouths,” Maksim Savin said.

Numerous reports of missing conscripts first emerged on social media. One woman wrote that her brother had been at work in the engine room and was listed as missing, but she was certain that he was dead.

Anna Syromaysova, the mother of a missing conscript, told the independent Russian news agency Meduza that she had been unable to see any official documents related to casualties. “There are no lists,” she said. “We’re looking for them ourselves. They do not tell us anything. ” Reached by telephone, she declined to speak with a foreign news organization.

Tamara Grudinina told the Russian language service of the BBC that her son, Sergei Grudinin, 21, had been assigned to the ship right after basic training.

When she heard that the ship had sunk, Ms. Grudinina said, she called a Defense Ministry hotline for relatives and was told that her son was “alive and healthy and would get in touch at the first opportunity.”

Soon afterward, a man who identified himself as the Moscow commander got in touch and told her that her son had “basically sunk together with the ship,” according to the BBC.

After the war started on Feb. 24, the family contacted naval officers to inquire about the ship and were told that it was not taking part in military actions and was due back in port soon, Maksim Savin said.

Calls from Leonid had stopped, but after speaking with the officers, they got a letter from him saying that he anticipated coming home soon, his brother said.

He said that his younger brother, who trained as an auto mechanic in a vocational school, had been reluctant to go into the military and had not supported the war. A family picture shows a lanky young man in a sailor’s uniform with a rifle slung across his chest, surrounded by his parents and three brothers.

Leonid Savin was much more comfortable hiking in the Crimean hills with the family dog, reading a book or tending to his plants, according to his brother. He had planted a palm tree and an avocado tree before heading off on his military service.

“In his letter home, he asked how his plants were doing,” Maksim Savin said. “He was worried about them.”