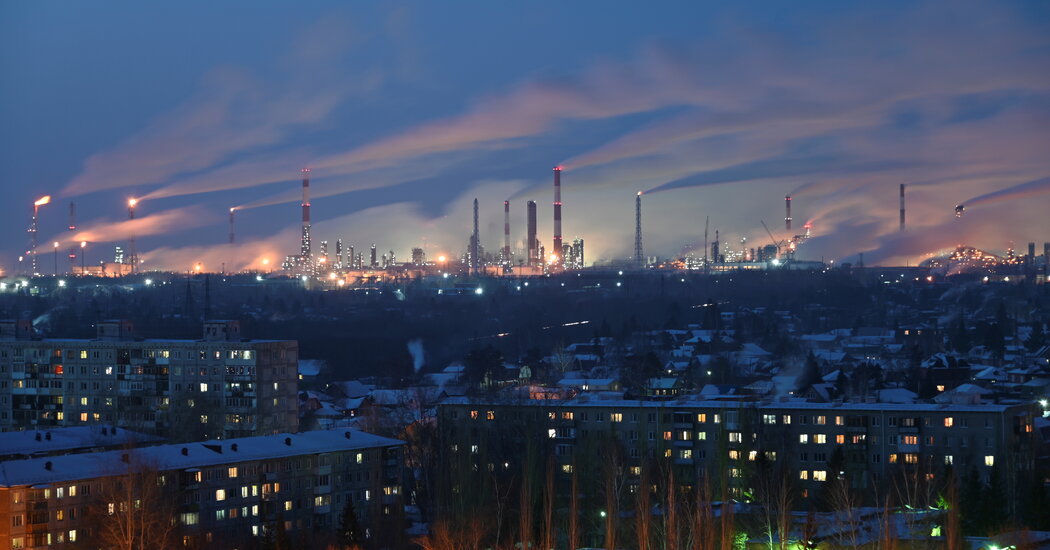 BRUSSELS – Russia’s faltering was against Ukraine suffered a pair of setbacks Thursday when the flagship of Russia’s Black Sea fleet sank after a catastrophic explosion and fire, as the European Union moved closer to an embargo on Russian oil imports.

Ukraine claimed to have struck the vessel, the guided missile cruiser Moskva, with two of its own Neptune missiles, while Russia said the blast was caused by ammunition aboard the ship. If confirmed, the missile attack would be a serious blow to Russia, both militarily and symbolically – proof that its ships can no longer operate with impunity, and another damaging blow to morale.

It would also give a lift to Ukrainian hopes, while demonstrating the defenders’ homegrown technological capacity and exposing an embarrassing weakness in the Russian navy’s antimissile defenses.

Moscow also faces the possible loss of European markets in fossil fuels, which are providing billions of dollars a month to support its war effort. The European Union has long resisted calls to reduce its energy dependence on Russia, but officials revealed on Thursday that an oil embargo is in the works and is likely to be adopted in the coming weeks.

That comes on top of a previously announced ban on imports of Russian coal. Taken together, the steps are bound to raise fuel and electricity prices in Europe, potentially disrupting the economy and provoking a political backlash.

Ukraine continues to brace for a Russian offensive in the eastern Donbas region – where Moscow has said it will focus its war efforts after its failure to capture the capital, Kyiv – while Russian forces squeeze the shrinking pocket of resistance in the ruined southern port of Mariupol . The devastation rained there has offered a dire warning of what may befall other cities in the event of a prolonged Russian siege, prompting a mass exodus of civilians from the Donbas.

Its international isolation deepening, the Kremlin reacted ominously to the growing indications that Finland and Sweden would join the NATO alliance in response to Russia’s invasion of Ukraine. On Thursday, the government warned that any such expansion of NATO would prompt an increased Russian military presence, including nuclear weapons, in the region.

The CIA director, William J. Burns, warned on Thursday of the possibility that Mr. Putin, facing a debacle in Ukraine, might use a tactical or low-yield nuclear weapon, though he stressed that he had seen no “practical evidence” that such a step was pending. It was the first time he discussed publicly a concern that has been much debated in the White House.

Given the potential desperation of President Putin and the Russian leadership, given the setbacks that they’ve faced so far, militarily, none of us can take lightly the threat posed by a potential resort to tactical nuclear weapons or low-yield nuclear weapons, “Mr. Burns said, in answering questions after a speech in Atlanta.

Prominent voices in Russian state media have made increasingly incendiary statements recently, calling for more brutality in battles that have already sparked calls for war-crimes investigations of the Russian forces.

Much remained unclear about Russia’s setback in the western Black Sea, where a blast on Thursday morning – Wednesday night in the United States – and subsequent fire forced many of the Moscow’s roughly 500 crew members to abandon ship. There was no word on casualties. Ukraine said it had struck the vessel with two Neptune missiles and sunk it.

Russia’s Defense Ministry initially said its sailors had managed to put out the fire and the Moscow, commissioned in 1983, remained afloat. But hours later, it said, the ship sank while being towed to port in a storm.

Western defense officials said they could not be sure what caused the explosion aboard the 12,000-ton ship. Three American officials briefed on the incident said all indications were that it had been hit by missiles. The officials cautioned that early battlefield reports can sometimes change, but expressed deep skepticism over the Russian account of an accidental fire.

Ukraine has been stressing the need for coastal defense weapons, and the US announced this week that it would send more of them. Pentagon officials said that other Russian ships had moved farther from the Ukrainian shoreline, lending credence to the claim of missile strikes.

“It’s going to have an impact on their naval capabilities, certainly in the near term,” but the long-term picture is unclear, said Pentagon spokesman John F. Kirby, a former Navy rear admiral.

Until now, Russian ships have been able to fire missiles at will against coastal cities. They have blocked Ukraine’s south coast and threatened an amphibious landing in the southwestern region. The presence of an effective Ukrainian anti-ship weapon – Ukraine says the Neptune has a range of about 190 miles – could change those calculations, though Ukraine’s commercial shipping is unlikely to resume anytime soon.

“This is not supposed to happen to a modern warship,” said Adm. James G. Foggo III, a former commander of the United States Sixth Fleet, whose area of ​​operations includes Europe. “If this was a Neptune missile strike, it’s indicative of complacency and lack of effective integrated air and missile defense capability.”

Ukraine has endured most of the suffering in the war that began on Feb. 24, with untold thousands of casualties, widespread destruction and millions of people displaced, but the blowback on Russia has also been severe. Moscow’s vaunted military has often seemed hapless, absorbing unexpectedly heavy losses of men and equipment, while unprecedented sanctions imposed by the United States and its allies have shaken the Russian economy.

President Vladimir V. Putin acknowledged some of that cost on Thursday in a videoconference with top government officials and oil and gas executives, referring to “the disruption of export logistics” in that industry and “setbacks in payments for Russian energy exports.”

Fossil fuels are Russia’s biggest export product, a huge part of the Russian economy that employs millions of people and supplies the government with much of the revenue needed to support its war-making machinery.

Now EU officials and European diplomats say the bloc is moving towards barring oil imports from Russia, a ban that would be phased in over months to allow countries to arrange alternative supplies. They said European leaders will not make a final decision until after April 24, when France will hold its presidential runoff; a rise in fuel prices could hurt the prospects of President Emmanuel Macron and boost his right-wing opponent, Marine Le Pen, who has praised Mr. Putin.

The government of Germany, the most influential country in the European Union, has been particularly reluctant to cut off Russian fuel, which would come at a steep cost and could lead to shortages. But pressure from allies and mounting evidence of Russian atrocities in Ukraine have, step by step, overcome that resistance. Germany refused to allow the virtually completed, $ 10 billion Nord Stream 2 gas pipeline to go into service, supported the coal ban and now appears to be on board with an oil embargo.

The shifting stance of the neutral Scandinavian states is another unintended consequence for Mr. Putin. In waging a war that he said was intended to keep Ukraine out of NATO – a distant prospect at best – he may have succeeded in driving two countries that had been steadfastly nonaligned for generations into the arms of the alliance.

Dmitri A. Medvedev, a senior Russian security official, said on Thursday that if Sweden and Finland joined NATO, there would be “no more talk of a nuclear-free Baltics” region. Moscow would be compelled to “seriously strengthen” its air and ground forces in the area, said Mr. Medvedev, a former president and prime minister, and could deploy nuclear-armed warships “at arm’s length” from Finnish and Swedish shores.

Vladimir Solovyov, a television host who is considered a leading voice of Kremlin propaganda, said on Wednesday that Russia should destroy all Ukrainian infrastructure, including basic utilities.

Russia “must bring these terrorists to their senses in the cruelest way,” he said on his show on the state-owned Russia-1 channel. “We need to talk differently with terrorists,” he added. “There should not be any illusions that they can win.”

Russia has forced independent news outlets to shut down or leave the country, and has criminalized disputing the Kremlin’s account of the war. Yet Margarita Simonyan, the head of the state-owned RT news organization, said earlier this week that the government should restrict information even more.

No major power can exist “without having information under its control,” she said, adding, “we are all waiting for this.”