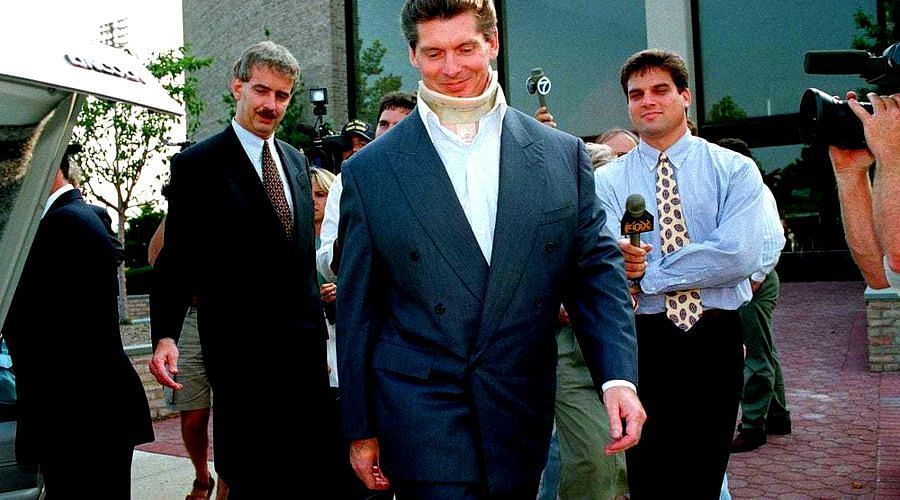 There’s no denying that WWE Chairman Vince McMahon stands tall as the most influential person in the history of sports entertainment. Now in his mid-70’s, he is truly the godfather of the industry, overlooking the multi-billion dollar empire that he built.

It wasn’t without its ups and downs along the way, however. And perhaps there’s no other time when McMahon was more ‘down’ than when he stood trial for alleged steroid distribution.

At the time, the then-WWF’s overall business was down, fully cooled off from the white-hot Hulkamania Era. The 90’s had arrived, and the impresario knew he needed to take his company in a different direction.

Vince McMahon was already struggling to find his next big mega star when he got the news that he was under investigation.

By the time 1994 rolled around, McMahon would be indicted for conspiring to distribute steroids to his performers. Many of the World Wrestling Federation’s past and present stars were called to testify in McMahon’s trial. The list included Rick Rude, Tom Zenk, The Ultimate Warrior and The Warlord, among others.

But the biggest name on the list was none other than Hulk Hogan himself. Like all but one witness, Hogan admitted to using steroids and confirmed that he’d picked them up at WWF headquarters and at events. But he also testified that McMahon never personally directed him to use steroids and had never provided them directly.

A courtroom drawing depicting Vince McMahon and Hulk Hogan during the 1994 steroid trial.

Only one wrestler, Kevin “Nailz” Wacholz, testified that McMahon pressured him to take steroids. But Wacholz had already engaged in an infamous backstage altercation with Vince and claimed the WWE Chairman sexually assaulted him. He was thus viewed as a disgrunted ex-employee with a grudge.

So there was the king of wrestling. Sitting in Federal District Court, awaiting his fate. If convicted, Vince McMahon would be facing up to 11 years in prison and a $ 1.5 million fine.

Finally, the case was decided … Not guilty.

That’s a cursory look at Vince’s trial, as there are volumes of documentation regarding the investigation, the trial and the acquittal. There is the story of Dr. George Zahorian, who was the mind behind the steroid scandal.

And there is also the deeply personal side of the story, which involves the effect of the trial not only on Vince McMahon, but his entire family. Both Shane and Stephanie were still very young then, and it was a gut-wrenching experience for them to watch their father endure the stress and anxiety of this trial.

In the end, McMahon never let the effects show, and eventually prevailed. The entire story was told well in the Dark Side of the Ring series.

From the moment the United States subpoenaed its first witness in the case against Vince McMahon, his lawyers told him to brace for scrutiny and surveillance like he’d never experienced.

“The Steroid Trials” premieres tonight at 9pm on @vicetv and @CraveCanada.

From the moment the United States subpoenaed its first witness in the case against Vince McMahon, his lawyers told him to brace for scrutiny and surveillance like he’d never experienced. “The Steroid Trials” premieres tonight at 9pm on @vicetv and @CraveCanada. https://t.co/plDErWAIEJ

In many ways, the steroid ordeal changed WWE and Vince McMahon forever. It put in motion the early stages of the wellness program. (Although to be fair, it took them over 10 years to get it right.)

As for Vince, he became much more savvy about minimizing his liabilities. He also gained an attorney for life in Jerry McDevitt and a new perspective on the future of his company. Soon he was back to business as usual, leaving the steroid trial behind for others to look back on.

What are some of your memories of Vince McMahon’s time as chairman of WWE? Please share your thoughts in the comments section below.