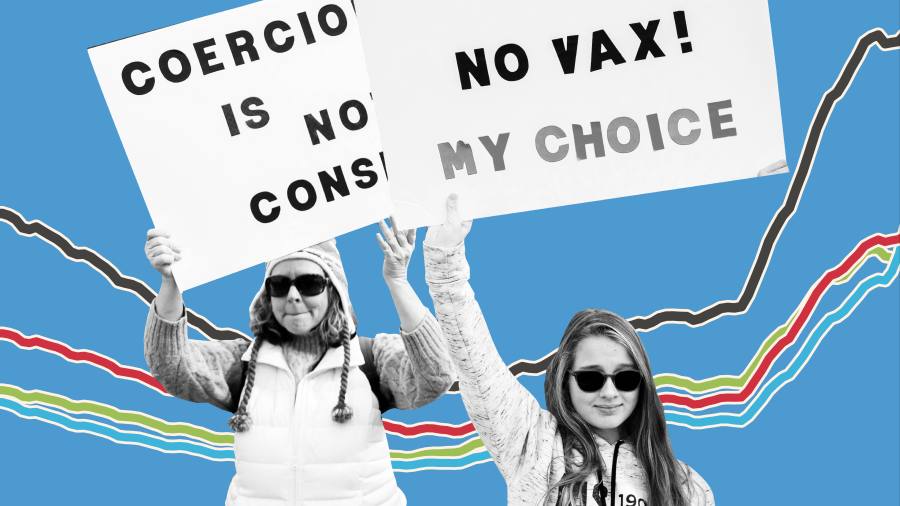 Almost half of the US Covid hospitalizations this winter could have been averted if the country had matched the vaccination coverage of leading European countries, according to a Financial Times analysis of the Omicron variant’s impact on either side of the Atlantic.

The data show large pockets of unvaccinated or partially vaccinated people in the US have placed more pressure on hospitals during the Omicron wave than in European nations with higher immunization rates. The analysis supports the findings of scientists and accounts of frontline medics who say lower vaccination levels are perpetuating the pandemic in the US.

The number of Covid patients in US hospitals on January 19 would have peaked at 91,000 instead of 161,000 if the US had the same rates of vaccine coverage in each age-group as Denmark, 100,000 if the US had matched the UK, and 109,000 if the US uptake rates looked like Portugal’s, the analysis showed.

Across the seven months since July, spanning the Delta and Omicron waves, US daily patient numbers would have averaged 39,000 – rather than the 80,000 recorded – had its vaccination coverage tracked that of Portugal.

The new data underlines the logic behind US President Joe Biden’s often fraught efforts to convince vaccine holdouts to get jabbed. This drive took a further hit last week as his administration was forced to withdraw its vaccination and testing mandate for large businesses following a Supreme Court ruling.

Peter Hotez, professor of virology at the Baylor College of Medicine in Houston, said opposition to vaccination was the “leading killer” of middle-aged adults in the US and had “saddled” hospitals with large numbers of patients who could have easily avoided becoming severely ill ”by getting the jab.

Hotez said those opposed to inoculation were “perpetuating the pandemic emergency state unnecessarily”.

Eric Topol, founder and director of the Scripps Research and Translational Institute, agreed. “If I were to really pin down the reasons for the really deplorable US situation, which is at the early stage of turning around, I would say [the low booster rate is] very high on the list, ”he said, adding that Omicron’s arrival when Delta“ was still out of control. . . really did not help ”.

The figures compiled by the FT demonstrate how the US – which had at first taken an early lead – fell behind in the vaccination race. On March 10, 36 per cent of US over-60s had received two doses – far ahead of Denmark (8 per cent) and England (6 per cent). Six months later, that lead had turned into a deficit: 18 per cent of US seniors were still yet to receive a second dose on September 10, compared to just two per cent in Denmark and England.

In July, when Delta was spreading across the western world, 13 per cent of people aged over 65 in the US were still yet to receive a first dose – compared with 3 per cent in Denmark, and 2 per cent in both Portugal and the UK .

As Omicron proliferated in late December, the US was belatedly closing the gap on its European peers in terms of first doses, but a lackluster booster campaign presented new problems. On December 20, 30 per cent of people in the US over-65 had gone six months since receiving a second dose, compared with just 2 per cent in Portugal; 5 per cent in England; and 7 per cent in Denmark.

“If the world had Portuguese vaccination rates, the pandemic would be a lot closer to ending,” said Jaime Correia de Sousa, associate professor at the University of Minho’s School of Medicine in Portugal.

Lone Simonsen, professor of population health sciences at Roskilde University in Denmark, said Denmark was only able to drop its Covid restrictions last week, despite soaring infection rates, because “the vaccine had made the virus mild”.

Although Omicron is now widely considered to be less virulent than Delta, vaccination still plays a vital role in protecting the vulnerable.

According to data published on Friday by the French directorate of research, studies, evaluation and statistics, an unvaccinated 70-year-old who tests positive for Omicron is still about twice as likely to end up in an intensive care unit as an unvaccinated 40- year-old with Delta. However, the risk is cut in half from 1.9 per cent to 0.9 per cent if they have received two vaccine doses. A booster dose takes their risk down three-fold again to just 0.3 per cent, one-third of the risk of the unvaccinated 40-year-old with Delta.

“The truth is that an 80-year-old that’s vaccinated and boosted and gets Covid most of the time has nothing more than a cold,” said Phillip Coule, professor of emergency medicine at the Medical College of Georgia at Augusta University. By contrast, he added, “a healthy 50-year-old who’s a little bit overweight, has problems with blood pressure or diabetes and is not vaccinated at all ends up in the ICU”.

In December, unvaccinated Americans above 18 years old were 16 times more likely to be hospitalized compared to those who had finished their primary course of vaccination, according to data from the Centers for Disease Control and Prevention. Americans between the ages of 50 and 64 years who were vaccinated and had a booster jab were 46 times less likely to be hospitalized.

Adam Kucharski, an epidemiologist at the London School of Hygiene and Tropical Medicine, said even the US had “sufficient baseline vaccine coverage” to avoid a “catastrophic path” from the Omicron wave, but he added that it was more susceptible to “tough outbreaks in certain places ”than the UK and Portugal.

“The US simply has fewer layers of protection from prior infection, vaccination and boosters added together than a lot of European countries,” he added. “That’s why it’s headed in a different direction.”

Using data from the US CDC, the European Center for Disease Prevention and Control, the UK Health Security Agency (UKHSA) and the Office for National Statistics, the FT calculated the share of each age group in each country that was unvaccinated, or had received one, two or three vaccine doses for each day of the past year, and how many weeks of waning had passed in each case.

This was then combined with data from England showing the pre-vaccine risk of Covid hospitalization for each age group, which was used as a baseline measure of risk of hospitalization.

Each age group’s baseline risk was then adjusted downwards over time in line with its vaccine uptake, using reported vaccine efficacy against hospitalization from the UKHSA, which also accounted for waning immunity. Separate vaccine efficacy figures were used for the Delta and Omicron variants.

The resulting combinations of baseline risk x vaccination status x variant proportions x variant-specific vaccine efficacy for each age group on each day were then combined into a single relative hospitalization risk number for each country on each day, weighted by the population in each group.

Relative risk scores were then shifted forwards by 21 days to account for a) the lag between exposure to the virus and the onset of severe disease, and b) the time taken for the vaccine to take effect.

Comparing two countries’ risk scores at any point in time then allowed counterfactual scenarios to be generated. For example, on December 29, lower rates of vaccination coverage among vulnerable groups in the US meant its relative risk score was 1.8 times higher than that of Denmark. Applying that to hospitalization numbers 21 days later, the total number of US Covid patients on January 19 was 161,000, which was divided by 1.8 to give 91,000 patients if US vaccination coverage had matched Danish coverage.