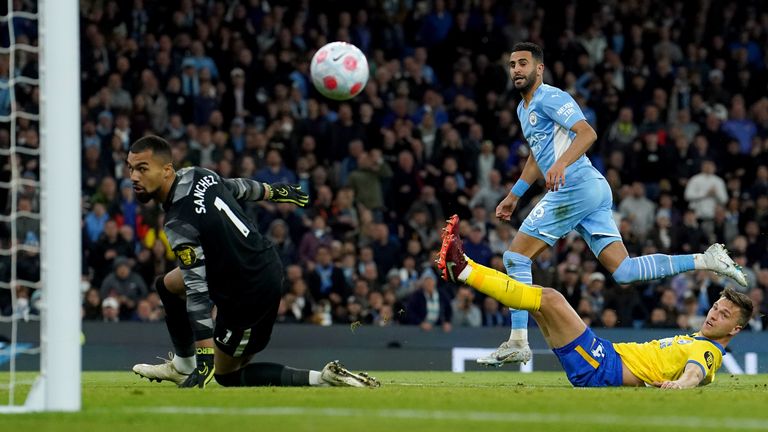 Manchester City returned to the top of the Premier League with a 3-0 home win over Brighton thanks to three second-half goals.

Liverpool’s victory over Manchester United on Tuesday had knocked the champions off the summit, but Pep Guardiola’s side responded with victory over the Seagulls to move a point above the Reds with six games to go.

After a frustrating goalless first half, City took the lead in the 53rd minute through Riyad Mahrez whose shot deflected off Joel Veltman and looped over goalkeeper Robert Sanchez.

City’s second also came courtesy of a deflection, as Phil Foden’s strike from distance (65) went in off a defender to find the bottom corner.

Bernardo Silva curled in a third with eight minutes left to ensure the title race remains in City’s hands.

City started the night in second, two points behind Liverpool and were looking to bounce back from Saturday’s FA Cup semi-final defeat to the Reds.

But Guardiola’s side faced a Brighton side full of confidence, having won their last two games at Arsenal and Tottenham, as they frustrated City in the first half.

Such was Brighton’s resistance, City were restricted to speculative efforts as Kevin De Bruyne fizzed a 25-yard shot just past the post while Bernardo Silva dug out a curling effort just inside the box that was pushed away by Sanchez.

Guardiola made a substitution at half time as Ruben Dias made his return after seven weeks out with a hamstring injury, as the Portuguese defender replaced Nathan Ake.

The tension at the Etihad was lifted when De Bruyne’s superb driving counter-attack run found Mahrez, who scored on his 250th Premier League appearance thanks to a couple of fortunate deflections.

Just 12 minutes later, Foden doubled their lead for his 12th goal in all competitions.

Then in the 82nd minute, after Brighton had made a mess of playing out from the back, De Bruyne set up City’s third as he flicked on Oleksandr Zinchenko’s pass to Silva, who curled his effort past Sanchez.

Man City are back at home on Saturday when they host Watford at the Etihad; kick-off 3pm. Brighton will be in Premier League action on Sunday when they take on Southampton; kick-off 2pm.