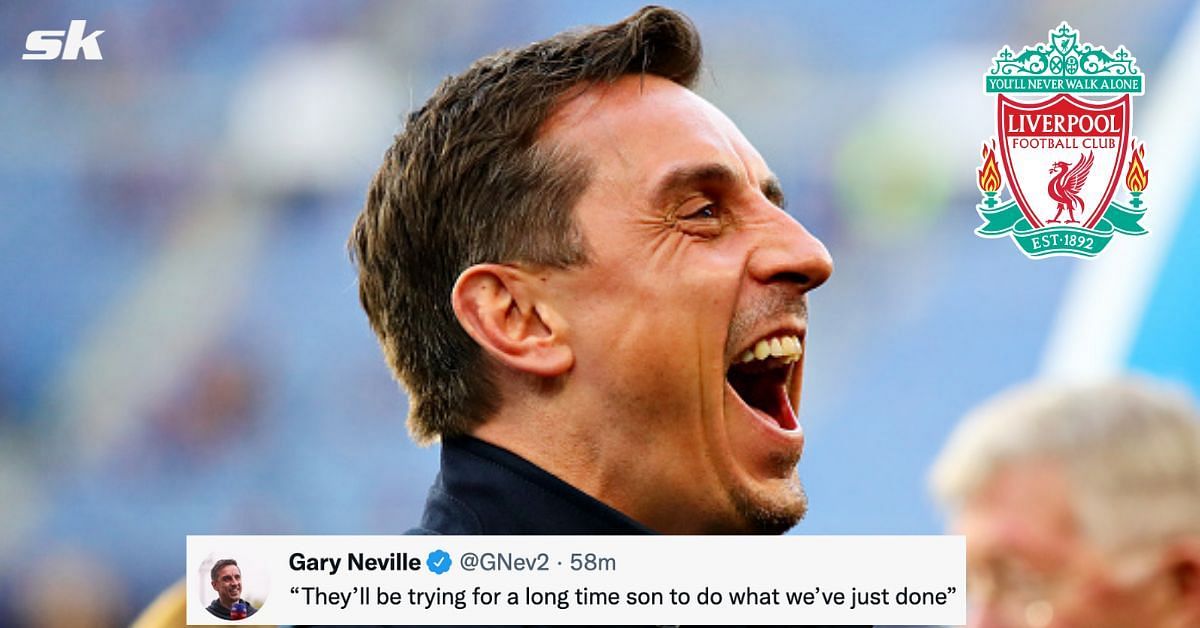 Former Manchester United right-back Gary Neville aimed a cheeky dig at rivals Liverpool after the Reds lost out on the Premier League title to Manchester City. He put out a picture on Twitter of himself with Sir Alex Ferguson after United’s UEFA Champions League triumph in 1999. Neville captioned it:

“They’ll be trying for a long time son to do what we’ve just done” https://t.co/un3XPlRw18

This is in reference to Manchester United’s treble-winning 1998-99 season, which Neville was a part of. They won the Premier League by just a point above second-placed Arsenal. They beat Newcastle United in the FA Cup final. The Red Devils then made an incredible comeback against Bayern Munich in the Champions League final. Trailing 2-1, they scored two goals in injury time to complete their treble.

Liverpool were close to a treble this season after winning the FA Cup on May 14. They trailed Manchester City by just one point ahead of the final day of the Premier League. The Reds won their match against Wolverhampton Wanderers 3-1.

However, City retained their title by making a brilliant comeback against Aston Villa. They trailed 2-0 until the 75th minute before scoring three goals to win the title by one point.

Liverpool will now face Real Madrid in the Champions League final at the Stade de France on May 28.

It was a contrasting season for both teams. The Reds chased a quadruple while United chased some pride. The Reds won two trophies, while United completed their fifth consecutive trophyless season.

On the final matchday of the season, Jurgen Klopp’s men need Aston Villa to get a positive result at the Etihad against Manchester City. The Villans tried their best, leading 2-0 until the 75th minute. However, a brace from Ilkay Gundogan on either side of a goal from Rodri helped City retain their title.

Manchester United, meanwhile, needed to win their match against Crystal Palace at Selhurst Park to qualify for the Europa League next season. They lost 1-0 but seventh-placed West Ham United also went down 3-1 against Brighton and Hove Albion, securing United’s place in the Europa League.