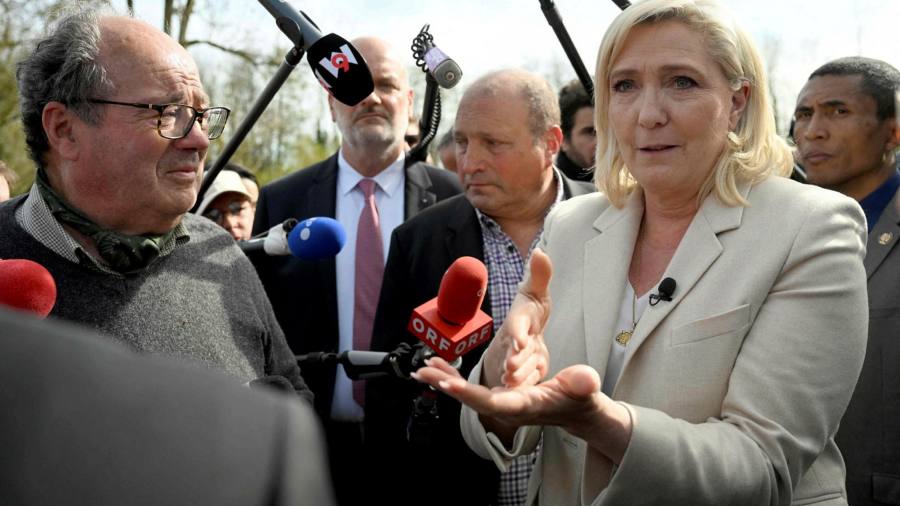 There, a cereal farmer told her of his struggles with the surging price of fuel and fertilizer, echoing what French voters tell pollsters is their biggest priority ahead of the April 24 run-off: the soaring cost of living.

The candidate, whose party has focused on immigration issues and is less known for its economic policies, has proposed fixing the problem by eliminating VAT on a basket of foods and essential household goods, while cutting the rate from 20 to 5 per cent on electricity and petrol.

It is one of a series of measures in Le Pen’s plan that would set a France she led on a new economic course, driven by more protectionist, nationalist ideas than the business-friendly agenda espoused by Macron.

In keeping with the campaign slogan “Give the French their money back”, she has proposed big tax cuts and new spending. Philippe Poitier, a Paris bar owner, said her focus on pocketbook issues had won him over. “Her ideas seem good, especially the tax cuts on petrol. We need someone to do something, ”he said.

There are risks from Le Pen’s economic strategy. Analysts said her program would add € 105bn a year to France’s already wide public deficit of € 161bn for 2021, or 6.5 per cent of GDP.

• Restore wealth tax on financial assets, exemption of housing from the tax base

• Renationalize highways to cut toll road fees by up to 15%

• Give preference to French people for social housing and jobs, and cut benefits to immigrants

Aspects of her agenda, such as a proposed referendum on immigration that would assert the primacy of French over European law, could also set up a clash with the EU, which would have repercussions for financial markets. Another flashpoint is her stated wish for France to cut its annual contribution to the EU budget by € 5bn.

“When Hungary or Poland are in breach of EU law, there are some tensions on the currency and markets, but it’s manageable,” said Philippe Gudin, an economist at Barclays. “But if it were to happen with France, one of the founding members of the EU, it would be a lot more problematic.”

Gudin estimates that Le Pen’s plans would funnel about € 42bn, or 1.7 per cent of GDP, back to the French public. But if her presidency sparked a fight with the EU followed by a debt crisis such as in Greece a decade ago, ordinary voters would end up paying the price, he said.

Under a Le Pen presidency, income tax would be scrapped for everyone under 30, and interest-free loans of up to € 100,000 would be offered to young families, with the debt forgiven if they had three children. A French sovereign wealth fund would be created to promote an economy focused on what she calls “localism” as opposed to Macron’s “globalism”.

Unlike Macron who wants to raise the retirement age, she would keep it at 62, but lower it to 60 for those who started working young.

While Le Pen and Macron claim their plans would not add to the public deficit, the Institut Montaigne think-tank found that both would worsen it because they overestimated savings and underestimated costs.

For example, Le Pen has said excluding immigrants from benefits such as social housing and healthcare would save € 18bn, but the Montaigne Institute reckons it would be half that. Macron’s program would add € 44bn to the public deficit.

The Medef employers’ federation, which has endorsed Macron, has warned that Le Pen’s economic plan would cause France to fall behind its EU neighbors.

Others doubt Le Pen would be able to implement her pledges. Much depends on whether her Rassemblement National party wins a majority in June’s parliamentary elections.

The prospect of a Le Pen victory has already rattled financial markets. After Macron’s poll lead narrowed ahead of last Sunday’s first round vote, the extra yield that France pays to borrow relative to Germany – the eurozone’s de facto haven – rose to the highest level since the pandemic began.

The spread on 10-year bonds reached 0.56 percentage points, still short of the nearly 0.8 percentage points reached during Le Pen’s last presidential campaign in 2017, before falling back slightly once it was clear Macron had a solid first-round lead. The euro also rebounded.

Latest polls predict Macron will win the run-off with 53 percent of the vote.

Vincent Mortier, chief investment officer at Amundi, the asset manager, said markets seemed “complacent about a Macron victory, even though the probability of a non-market friendly victory by Le Pen is not negligible.”

One difference between Macron and Le Pen’s economic policies is that he puts more emphasis on fostering a dynamic labor market, arguing it is the best way to ensure purchasing power. His labor reforms have helped reduce unemployment to about 7 per cent, the lowest levels since 2008.

Yet voters do not seem impressed, perhaps because inflation concerns have taken over, although France’s 5.1 per cent inflation rate year-on-year is the lowest in Europe, according to Eurostat. In a recent Ipsos poll, slightly more respondents, or 25 per cent, said they had confidence in Macron to handle the issue of living standards, compared with 21 per cent for Le Pen.

Irdrielle Mounet, a student in Paris, said she was skeptical that the presidential election would make any difference but was prepared to cast a vote for change. “Le Pen says she is more focused on helping young people – so maybe it’s worth a try.”