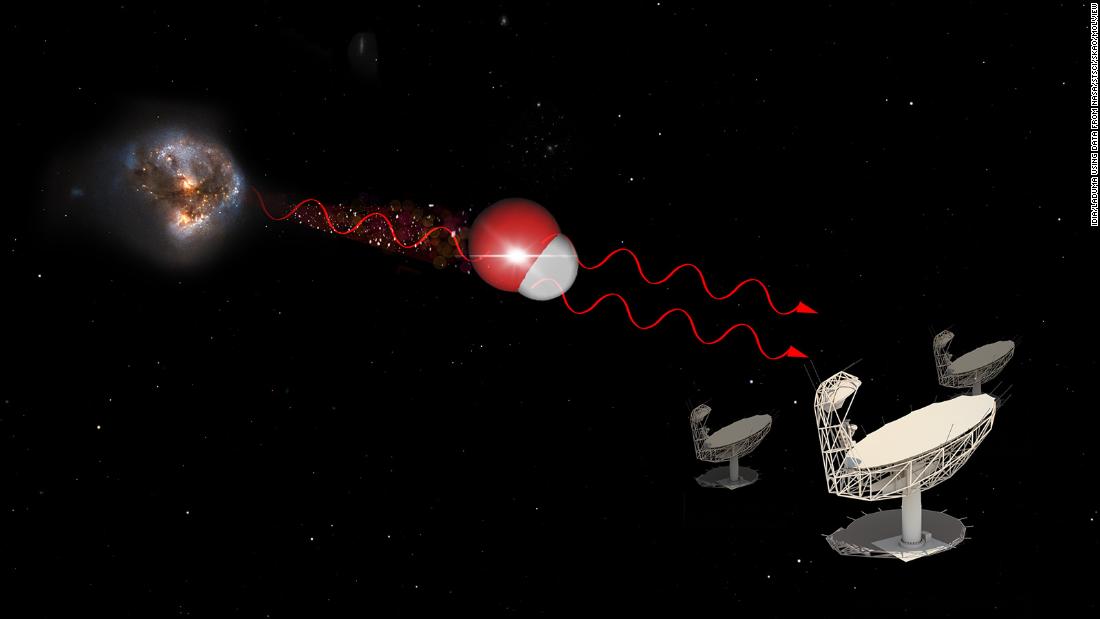 This record-breaking megamaser is the most distant one ever observed at 5 billion light-years away from Earth.

Glowacki is a research associate at the Curtin University node of the International Center for Radio Astronomy Research in Australia.

Megamasers are created when two galaxies crash into each other. It is the first hydroxyl megamaser that MeerKAT has observed, Glowacki said.

Hydroxl, a chemical group consisting of one hydrogen atom and one oxygen atom, can be found inside galaxy mergers.

“When galaxies collide, the gas they contain becomes extremely dense and can trigger concentrated beams of light to shoot out,” Glowacki said in a statement.

The research team has named the laser Nkalakatha, which means “big boss” in isiZulu, the Bantu language of the Zulus in South Africa.

The astronomers detected the megamaser on the first night of a survey that spanned more than 3,000 hours of observation time using MeerKAT.

“It’s impressive that, with just a single night of observations, we’ve already found a record-breaking megamaser,” Glowacki said. “It shows just how good the telescope is.”

The research team is continuing to use MeerKAT to observe narrow areas in the sky closely and search for the same elements spied in the megamaser. Doing so could provide more insight into how the universe has evolved.

“We have follow-up observations of the megamaser planned and hope to make many more discoveries,” Glowacki said.

The MeerKAT telescope, located in the Karoo region of South Africa, includes an array of 64 radio dishes and has been operational since July 2018. The powerful telescope is sensitive to faint radio light.

MeerKAT is a precursor to the transcontinental Square Kilometer Array, or SKA, a telescope under construction in both South Africa and Australia.

The array will include thousands of dishes and up to 1 million low-frequency antennas in an effort to build the world’s largest radio telescope.

Despite the fact that these dishes and antennas will be in different parts of the world, together they will create one telescope that has over 1 square kilometer (0.39 square miles) of collecting area. As a result, astronomers can survey the entire sky much more quickly than with other telescopes.