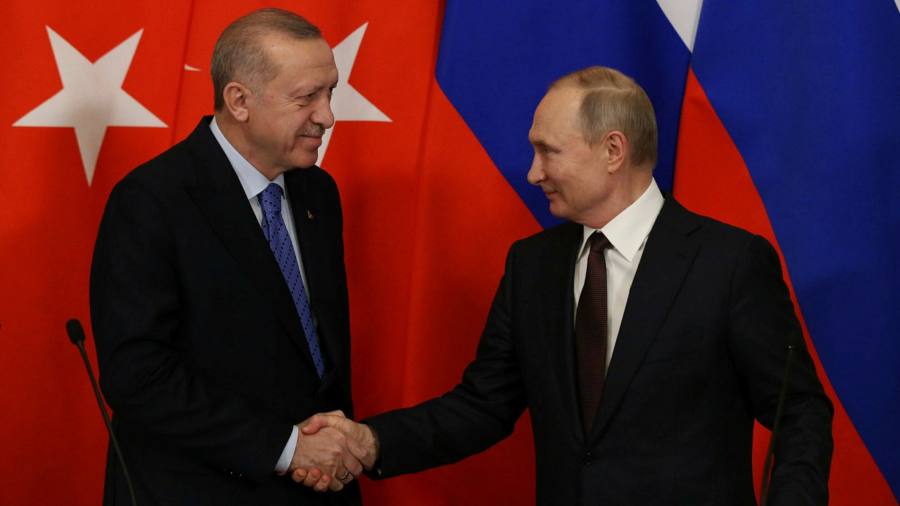 Vladimir Putin’s war on Ukraine has not only sparked a rare degree of unity in the west and NATO, and galvanized the EU. It is also sending ripples and waves into the wider Middle East, the scene of Putin’s last war.

Amid much regional ambiguity and fence-sitting, it is the position of Turkey, a 70-year NATO member and frustrated EU candidate, that looks most exposed.

In recent years, President Recep Tayyip Erdogan has antagonized his erstwhile allies in the west, breaking sanctions against Iran, hounding his opponents at home and launching regional military operations in Syria and Iraq, Libya and the Caucasus. Buying Russia’s S-400 missile defense system was a particularly provocative move that raised fears of Turkey being a cuckoo in the NATO nest.

Erdogan believes the US and some EU countries supported the abortive coup to oust him in mid-2016, and officials in Ankara say the US and Germany had withdrawn their Patriot missile batteries from the country. But Turkey was kicked out of the European consortium building the F-35, the new generation stealth fighter jet, for this S-400 purchase. There is even doubt about whether the US is willing to upgrade Turkey’s existing fleet of F-16 fighters.

However, after punching a hole in NATO solidarity, it is possible the Ukraine crisis is pushing Turkey back into western arms.

Erdogan and Putin narcissistically admire each other as strongmen kicking against what they see as the arrogant restraints of a western-dominated rules regime. But theirs is a shaky alliance of convenience. Only with a green light from Russia, whose air force turned the tide of Syria’s civil war, could the Turks secure four enclaves in northern Syria. This prevented US-backed Syrian Kurdish forces from uniting their territories into a self-governing entity – which Ankara was keen to prevent, due to its concerns about a rekindled Kurdish insurgency inside Turkey.

Now, Turkey has pledged to apply the 1936 Montreux Convention, which governs the passage of warships through the Bosphorus and the Dardanelles in time of war. This should stop further Russian traffic into the Black Sea – from where it has attacked Ukraine – except those vessels returning to base.

This could be a big step. But Erdogan is still trying to keep lines open to both Russia and Ukraine. True, he has supplied Kyiv with some of the Turkish combat drones that turned the tide of war in Libya and against Armenia in Nagorno-Karabakh. A video posted by the Ukrainian embassy in Ankara shows one blasting a cluster of Russian tanks.

Yet Ankara has so far not joined the sanctions drive against Moscow; and Turkey abstained at the Council of Europe’s vote to suspend Russia. Erdogan is stuck on the fence: the neo-sultan, like his neo-tsarist neighbor Putin across the Black Sea, also harbors grandiose neo-Ottoman restorationist ideas of territorial and maritime expansion. If Putin succeeds in Ukraine, moreover, Erdogan may conclude NATO is a worthless paper tiger.

Iran, too, has responded with caution to the onslaught on Ukraine. Tehran inches closer to reviving the 2015 nuclear deal it signed with the US and five world powers. It is the one country prior to Russia that has been hit with both ejection from Swift, the messenger system that connects the vast bulk of global financial transactions, and had its central bank embargoed. But the effects of this western pincer movement on a real superpower may curb its enthusiasm for its alliance of convenience with Russia – it might even inhibit its ceaseless breast-beating about great and lesser Satan.

Both Turkey and Iran, historically, have lost wars to Russia and suffered from its occupations. Now, though, Turkey may face Russian reprisals on its enclaves in Syria. Iran and its allies such as Hezbollah, whose ground forces saved Bashar al-Assad’s regime from a popular rebellion, may have a freer hand in Syria while Putin’s attention is elsewhere.

Some of the west’s traditional regional allies in the Gulf and Middle East feel the US is no longer the guarantor of their security, and have widened their reach. Israel, the UAE and Saudi Arabia are discomfited by this war, as proved when the UAE abstained in the UNSC alongside China and India. The Saudis and Emiratis, moreover, operate the OPEC + oil production deals in agreement with Russia. Israel, for its part, values ​​its Russian relationship and knows it needs the acquiescence of Russia’s air force and missile defenses to prosecute its shadow war of bombing missions against Iranian forces inside Syria.

In coming days, however, ambiguity or ambivalence will be trickier. Putin could become increasingly enraged by Ukrainians’ resilience in holding back a massive Russian invasion force. If he opts to flatten Kyiv with the sort of bombing he used on Grozny in the second Chechen war, or on Aleppo in the Syrian civil war, then fence-sitting is going to get really uncomfortable.