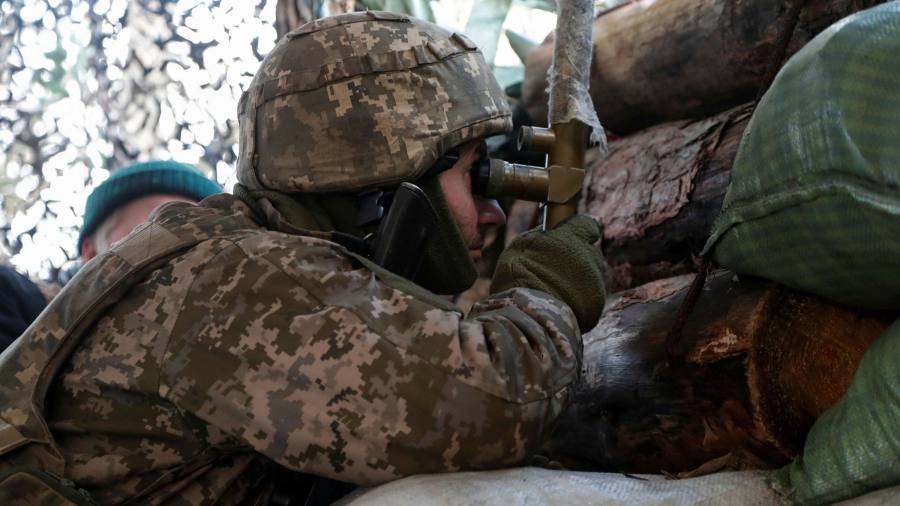 The Donbas is where the Russian invasion of Ukraine began eight years ago and it could prove decisive in how it ends, western defense officials and analysts say, as Moscow adjusts its tactics and refocuses its forces to surround the Ukrainian troops fighting in the eastern region.

It would be a significant blow to Kyiv’s war effort if Russia succeeded in defeating Ukraine’s so-called Joint Forces Operation in the Donbas. While the precise number of Ukrainian troops in the region is subject to an information blackout, as many as 40,000 crack troops, or about a quarter of Ukraine’s land forces, were stationed there when Moscow launched its latest invasion four weeks ago.

“That is the area where we have most concerns and where Russians have made most progress,” a western defense official said. “I do not think there is an imminent risk of Ukrainian troops being encircled but it is one to watch.”

Russian success in Donbas would represent a big military advance for Moscow. At the start of the campaign, the Russian army showed a puzzling inability to concentrate its forces into one or two main thrusts, or to take a main city. Lightning strikes left Russian units exposed, while skilful Ukrainian resistance defeated larger forces. The attack quickly stalled.

But now, western defense officials and analysts said, the Russian military might be consolidating its efforts into a more methodical, two-pronged approach.

The first involves “rubblising” besieged cities such as Kharkiv with artillery and missile strikes and then holding captured territory around them, possibly to use as a bargaining chip in peace talks.

The second part involves a concerted effort to defeat the Ukrainian troops in Mariupol and surround the JFO in the Donbas.

“Mariupol is significant for lots of reasons. . .[as an]important port. . .[that]makes it easier for the Russians to reach overground to Crimea, ”a senior US defense official said. It is also “the southern pole of an effort by the Russians to close off. . . the Donbas so that Ukrainian forces are pinned down there and unable to come to the defense of cities farther to the west, including Kyiv. ”

Defeating a large part of Ukraine’s regular army in the Donbas could also deliver Russia two strategic goals, defense officials and analysts said. It would be a demoralizing blow to Kyiv; capturing and controlling the Donbas might also allow President Vladimir Putin to declare “success” at home in Russia.

“The encirclement and destruction of a large part of [Ukraine’s] regular forces could represent a victory condition for Russia in two ways, ”said Samuel Cranny-Evans, a military sciences analyst at the Royal United Services Institute in London.

It could lead to a “collapse of will” that would make a prolonged siege of Kyiv unnecessary, he said. It might also allow Moscow to “claim it had achieved its goal of demilitarizing Ukraine and enable [the] annexation of [the] Donetsk and Luhansk ”breakaway republics.

The Russian forces involved are among its most capable, analysts said, and are advancing on three broad fronts.

Pushing north-east from Crimea are well-equipped troops from Russia’s 58th Combined Arms Army and 22nd Army, which this week launched what defense officials said may have been a feint attack on the port of Odesa.

“Is it a diversionary tactic to. . . hold and fix Ukrainian troops in the south so that they can not come to the relief of their comrades in Mariupol? ” said John Kirby, the Pentagon’s spokesman. “It’s difficult to know.”

Meanwhile, pushing south from near the Russian border, bypassing the besieged city of Kharkiv, are the 1st Guards Tank Army and 6th Combined Arms Army.

“If those forces then link up with the forces pressing north. . . then you need to watch that, ”a Nato intelligence official said.

Lastly, pushing west from the Donbas are Russian-supported separatists and Russia’s 8th Combined Arms Army, “which has been modified, by adding more armor, for breakthrough operations”, Cranny-Evans said.

“Russia has the military mass to break the JFO, and the fact it seems to be acting more methodically is worrying,” he added.

Kyiv has released little information on the troops and few, if any, journalists are reporting from the region.

But defense officials and analysts say JFO troops are battle hardened by eight years of fighting and extensive special forces training by the US, UK and Canada.

Which side might prevail in the Donbas remains as open as the ultimate fate of Russia’s invasion.

“The JFO is vulnerable to encirclement but Ukrainian forces have fought smartly and we expect them to anticipate that,” the second western official said. “They are among some of the best trained and equipped of Ukrainian forces. They are also well defended and dug in. ”

As for Russia’s troops, NATO said on Wednesday it estimated that as many as 15,000 had been killed. Allow for casualties of around 30,000, and about a quarter of Russia’s invading force has been killed or wounded. By comparison, around 15,000 Russian troops died over their decade of action in Afghanistan.

“How you look out on the future of the war really depends on your answer to one question,” said Michael Kofman, a senior research scientist at the CNA think-tank.

“Whether you think the worst in terms of Russia’s poor military performance has already been seen[in Ukraine]. . . or the best, ”he explained to the War on the Rocks podcast, adding that Russia still had ample to scope to reinforce its troops, albeit with forces that would probably be less well equipped and trained.