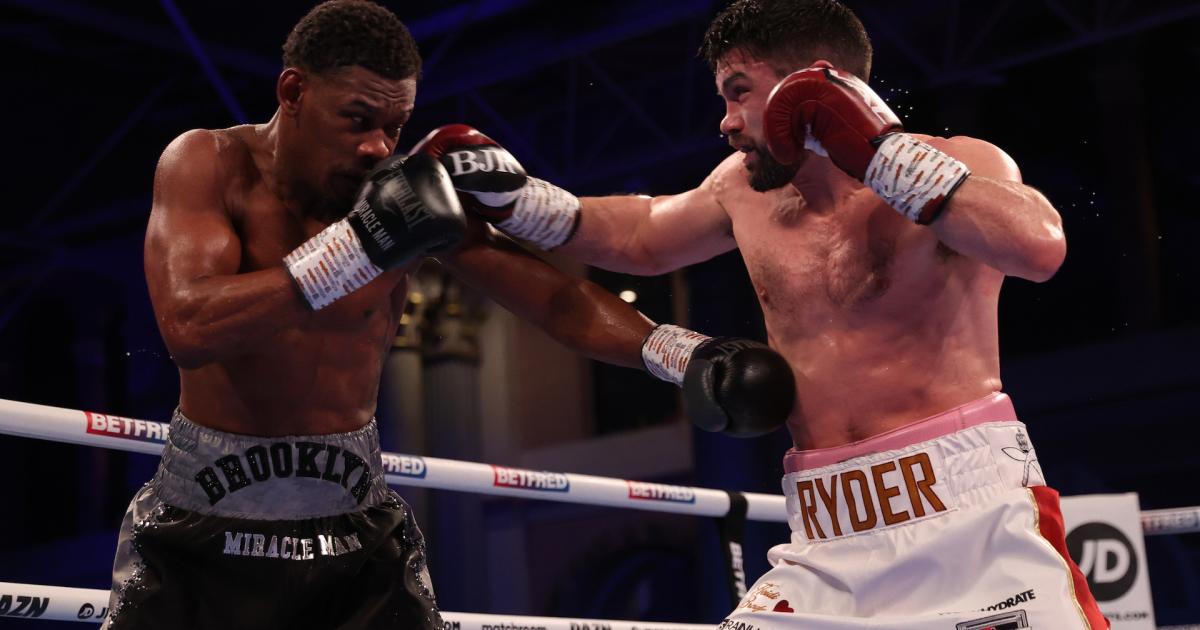 Daniel Jacobs’ super middleweight journey ground to a surprise halt on Saturday night with a split-decision loss to John Ryder.

“The Miracle Man” traveled to Ryder’s home turf of London for this must-win contest at Alexandra Palace, but he did not suffer the wrath of the fans, with a distinct lack of grief given during his ring walk and announcement. In fact, the main event itself fell a little flat at a venue usually known for its raucous atmosphere, with the majority of the crowd there for undercard fighter Johnny Fisher.

Former 160-pound titleholder Jacobs was making his first appearance in a ring since November 2020, a dull split-decision victory over Gabe Rosado. Ryder, meanwhile, was coming into the bout off a win over Jozef Jurko last September.

MORE: Join DAZN for more action next weekend, with Munguia vs. Ballard

Through the first three rounds, Jacobs looked a class above. The American did not land anything too venomous, but he did not really need to, as he controlled the bout with relative ease. The fight was physical but without the ferociousness one might expect from “The Gorilla.”

Ryder gained more of a foothold in the fourth, while the fifth offered more entertainment as Jacobs bit back with some nice combinations. The seventh saw Ryder finally start hurting his more decorated opponent as they began entertaining the quiet audience with a great exchange.

The jab that allowed Jacobs to dictate the early stages began to elude him, with Ryder cranking up the heat in Round 8. The Englishman was catching him at both distance and, more importantly, on the inside, in a sustained period of pressure. The visitor looked gone and was saved by the bell.

Ryder won the ninth, too, landing well as now the more powerful man. Former middleweight champion Darren Barker, on DAZN commentary duty, rose to his feet to applaud during one combination.

The following two rounds were much more even affairs, but Jacobs looked as though he had just about done enough to edge Ryder. But he hadn’t.

The first card went in favor of Jacobs 115-113; the second and third to Ryder by the same score. On a night of home victories, this was the biggest of all. Jacobs had been stunned and fell to a fourth career loss, with Ryder joining the esteemed company of Saul “Canelo” Alvarez, Gennadiy Golovkin and Dmitry Pirog.

“The Romford Bull” was arguably the main attraction of the night, and he certainly had the whole arena behind him; the crowd sang his name throughout the early stages of the evening. He remained undefeated after going the distance for the first time in his career.

Cash won the WBC international middleweight title and remained undefeated. This fight caught fire in the second when Cash was rocked, and he seemed to be in for a very close call on the cards after being dropped again in the final round. But for the second time on the night, the home fighter came away with a decision win.

The American dominated the opening bout of the main card, on the front foot throughout. After several knockdowns came the KO victory.