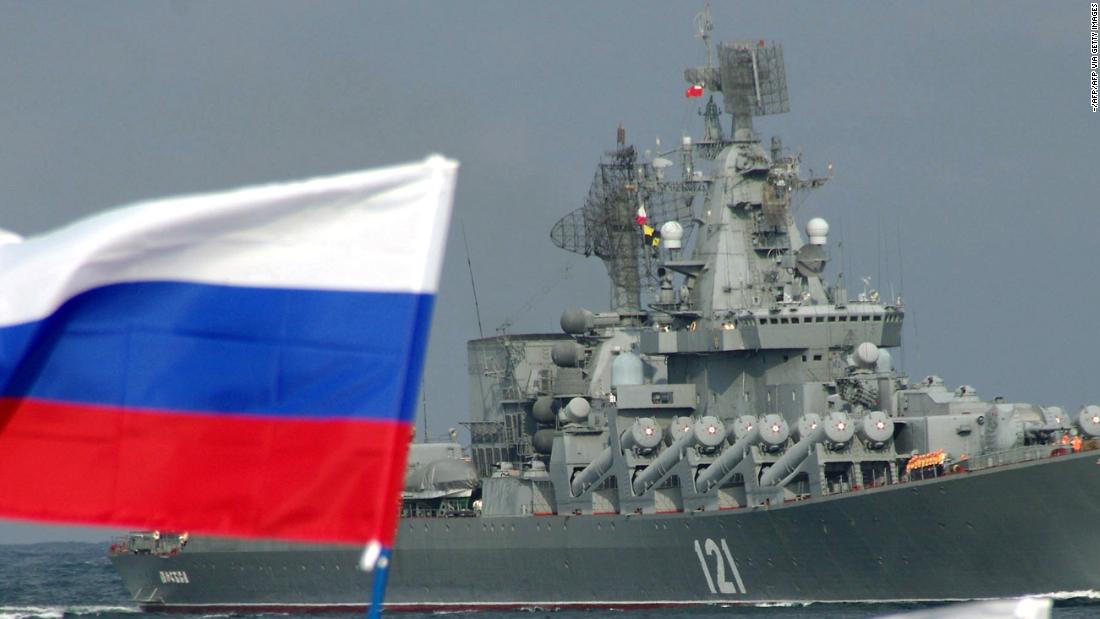 Whether it lies there as the victim of Ukrainian missiles, Russian incompetence, bad luck or a combination of all three is unclear. What is certain, though, is that the biggest wartime loss of a naval ship in 40 years will raise troubling questions not only for Moscow, but for military planners around the world.

The ship sank off the coast of Ukraine in the Black Sea on Thursday.

Russia’s Defense Ministry says a fire of unknown origin detonated the ship’s stored ammunition and the resulting explosions left Moscow with structural damage. It says the warship then sank amid rough seas as it was being towed to a nearby port.

Ukraine says it hit the Moscow with anti-ship cruise missiles and that these sparked the fire that detonated the ammunition.

US and Western defense officials seem to favor the Ukrainian account.

The US believes with “medium confidence” that Ukraine’s version of events is accurate, a source familiar with the latest intelligence told CNN.

The Moscow was armed with a range of anti-ship and anti-aircraft missiles as well as torpedoes, naval guns and missile defense systems, meaning it would have had massive amounts of explosives aboard.

When was the last time a ship of this size was lost in war?

The Argentine cruiser General Belgrano was torpedoed and sunk by the British nuclear-powered submarine HMS Conqueror on May 2, 1982, during the Falkland Islands war.

Russia has not disclosed the number of casualties occurred during Moscow’s fire and subsequent sinking. A total of 323 crew died when the General Belgrano went down.

What does the loss of the Moscow mean for the Russian war effort?

The biggest effect may be on Russian morale. As the flagship of Russia’s Black Sea fleet, the Moscow was one of its most visible assets in the Ukraine war. Though Moscow carefully manages news about the war in Russia, it will be hard to hide the sudden absence of such a large ship.

And its loss will raise doubts about Russia’s warfighting abilities, whether it was due to enemy action or accident.

“Both explanations for the sinking of the Moscow indicate possible Russian deficiencies – either poor air defenses or incredibly lax safety procedures and damage control on the Black Sea Fleet’s flagship,” analysts Mason Clark, Kateryna Stepanenko, and George Barros at the Institute for the Study of War wrote in their daily war briefing.

Carl Schuster, a former U.S. Navy captain, said the doubts went all the way to the Kremlin.

“It raises questions about naval competence 10 years after (Russian President Vladimir) Putin announced he was going to restore the navy’s capabilities, morale and professionalism,” Schuster said.

“It seems he has not been able to keep any of his promises for any of Russia’s military services,” Schuster said, noting Russia had suffered setbacks on land too.

But analysts are split on what impact the sinking will have on the Russian invasion.

The ISW analysts see it as a relatively minor blow, saying the ship was mostly used for cruise missile strikes on Ukrainian logistic centers and airfields. Russia has land-based systems and strike aircraft that can do the same thing, they said.

However, they added that if it was indeed a Ukrainian missile that led to the sinking, the Russian navy would have to rethink its operations, possibly moving ships farther from Ukrainian territory and adjusting their air defenses.

“It will have an impact on that capability, certainly in the near term,” Kirby told reporters.

A lesson for China?

Analysts say the sinking will be carefully studied in East Asia, especially if it is confirmed that Ukrainian missiles struck the warship.

In particular, analysts will be searching for any insight it might offer into any potential military conflict involving Taiwan – the democratically ruled island that Beijing’s ruling Communist Party claims as part of its territory. Beijing has not ruled out the use of force to gain control of Taiwan and this has caused tensions with the US, which is committed to providing the island with defensive weapons.

Timothy Heath, senior international defense researcher at the RAND Corp. think tank, said the strike on the Moscow would underscore to both China and the US “the vulnerability of surface ships” in any potential military clash.

Heath said in such a scenario the US Navy would want to keep its surface ships well out of range of the anti-ship missiles Beijing has amassed on the Chinese mainland.

China, on the other hand, would be aware that Taiwan had been acquiring inexpensive anti-ship missiles similar to those Ukraine claims hit the Moscow, Heath and others said.

Because of that, “any potential (Chinese) invasion of Taiwan remains an extremely high risk mission,” Heath said.

But some analysts said Moscow’s sinking has limited relevance to the situation in East Asia.

Thomas Shugart, a former U.S. Navy submarine commander who is now an analyst at the Center for a New American Security, said there were too many differences between the situations.

The Moscow air defense systems are not in the same league as the more modern Aegis systems on US Navy destroyers, and Ukrainian anti-ship missiles are not as good as Chinese ones, Shugart said.

And Soviet-era warships like the Moscow have been typically “known for their offensive punch, not for their defensive systems or their damage control,” Shugart said.