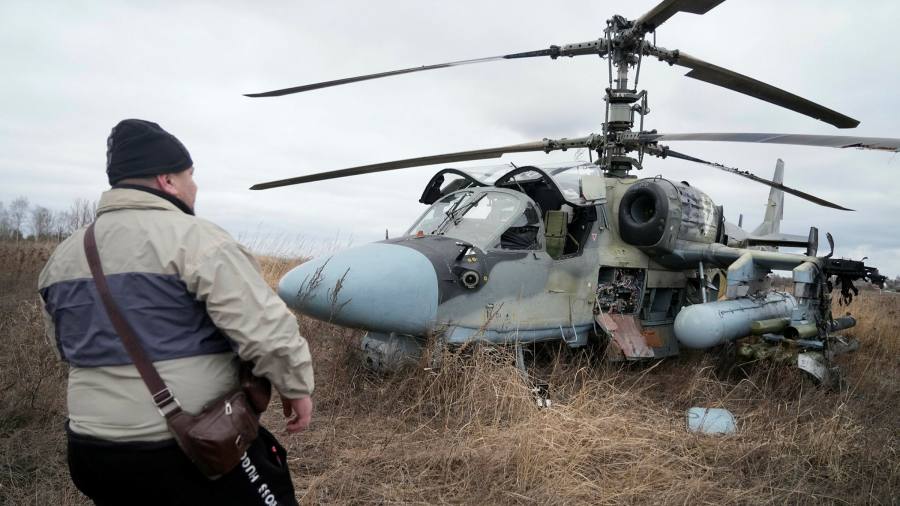 The helicopter-led attack by Russian paratroopers on the Hostomel airfield north of Kyiv on Thursday started a daring operation whose success could have significantly boosted Moscow’s hope of seizing control of Kyiv in a lightning assault.

But the recapture of the heavily strategic runway by Ukrainian special forces after more than 10 hours of intense fighting underscored both the level of Ukraine’s resistance and the high-risk nature of Russia’s invasion strategy that has so far brought mixed results, said intelligence officials and defense analysts.

“What’s clear is that if Moscow had hopes of quick and easy gains, they would be terribly optimistic,” said Michael Kofman, a senior research scientist at CNA, a Washington-based think-tank. “Some of the big risks taken by the Russian military. . . do not appear driven by sensible operational requirements. . . Moscow’s thinking on this war seems to have been colored by war optimism. “

Those early disappointments were still only likely to delay, rather than change, Russia’s ultimate goal of capturing Kyiv and unseating the administration of Ukrainian president Volodymyr Zelensky, said western officials.

Russian forces eventually recaptured and held Hostomel, in Kyiv’s north-west suburbs, on Friday but only after significant damage to the airstrip. Moscow had targeted the airfield with the intention of using it to fly in large numbers of assault troops aimed at a swift capture of the capital. Those airborne deployments were instead diverted to an airfield in Belarus, 250km away, and forced to travel south by land.

The initial failure to capture and hold Hostomel has played a major role in Russia’s slower than hoped advance on Kyiv, western officials said, adding that Russia has also made less progress in the first two days of the war than Moscow had expected in the east of the country.

“The Putin plan was a short, decisive victory. A lot of guys were saying it’ll take five minutes, or two hours, and Ukraine will collapse. Well, they’re not. The coming week is going to be really decisive, ”said Pavel Felgenhauer, a Russian military expert.

The early stages of Russia’s invasion had a heavy focus on airborne troops. The attack began with intense cruise missile strikes on key Ukrainian defense assets, including more than a dozen airfields, followed by assaults by special forces and paratroopers on key landing sites, such as Hostomel, that would have facilitated the rapid deployment of more troops.

Western officials cautioned that Russian military commanders may now shift from that targeted approach to a broader ground assault, noting that the Kremlin has so far deployed less than half of the close to 200,000 troops that it had assembled on the borders of Ukraine in preparation for the invasion.

“In the Kremlin they will now be reflecting on the plan not going as it was thought, and there will be all sorts of challenges around the logistics of supporting sustained combat they were not expecting,” James Heappey, UK armed forces minister, said on Saturday.

Heappey told the BBC that in response to the setbacks Russia could increase the use of heavy artillery bombardment. “What lies ahead for Ukraine are days of utter brutality,” he said.

On Saturday afternoon, Ukraine still controlled much of the capital, despite some Russian incursions to the north and west of the city and heavy fighting overnight, including some artillery strikes on residential buildings.

“Ukrainians have been defending extremely bravely and with enormous courage,” said one western official, but cautioned that Russia’s significantly larger military capabilities meant that Ukraine’s resistance could not last indefinitely.

“We held firm. . . We have withstood and successfully repelled enemy attacks, ”Zelensky said on Saturday afternoon in a televised address to the nation. “We broke their plan.”

Ukraine has claimed it has destroyed more than 100 Russian tanks and killed 3,500 Russian troops. Military claims of losses on both sides cannot be independently verified.

Felgenhauer said one key victory that the Kremlin hoped for – a warm welcome from Ukrainians who see Russia as their historical brothers – had dramatically failed to materialize.

“Maybe they believe their own propaganda that the Ukrainians will meet the Russian liberators with flowers, that the Ukrainian military will lay down their arms and everything will be nicely all wrapped up in several days, which is apparently not happening,” he said.

“And that’s the main problem. . . The Ukrainian people see that they can fight back, ”he added. “This war could become a very serious problem for Russia.”