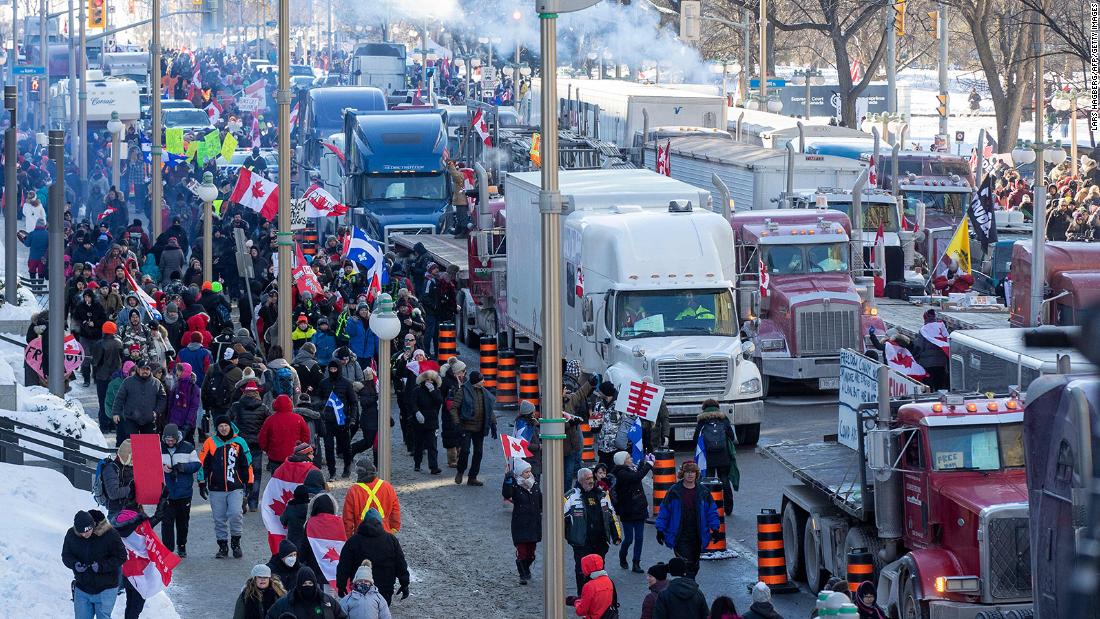 “Several criminal investigations are underway in relation to the desecration of the National War Memorial / Terry Fox statute, threatening / illegal / intimidating behavior to police / city workers and other individuals and damage to a city vehicle,” the Ottawa Police Service tweeted Sunday.

This weekend’s protests grew out of the “Freedom Convoy” that made its way through Canada for several days before arriving in Ottawa on Saturday. It began as a protest by truckers opposed to vaccine requirements, before gaining followers calling for an end to other Covid-19 mandates as well.

The mandate, which took effect January 15, requires truckers entering Canada to be fully vaccinated or face testing and quarantine requirements, though Prime Minister Justin Trudeau told reporters last week that 90% of the country’s truckers were already vaccinated (Trudeau’s office has not disclosed the location of the prime minister, whose family lives about a mile from Parliament Hill).

Saturday’s protests were generally peaceful, police said – but noisy. The sound of horns honking was heard throughout the capital, though many demonstrators were concentrated in the downtown core, causing traffic in and around Parliament Hill and prompting city officials to ask residents to avoid the area due to gridlock.

And while temperatures reached only 8 degrees Fahrenheit, the cold did not stop crowds from joining the convoy on foot or greeting them with Canadian flags on bridges and highway overpasses.

No arrests were reported by the Ottawa Police Service on Saturday and overnight. But there were incidents that prompted condemnation by officials such as Canada’s chief of defense, Gen. Wayne Eyre, who said he was “sickened to see protesters dance on the Tomb of the Unknown Soldier and desecrate the National War Memorial.”

“Generations of Canadians have fought and died for our rights, including free speech, but not this,” Eyre tweeted Saturday. “Those involved should hang their heads in shame.”

A similar denunciation also came from the Canadian Trucking Alliance, a federation of Canadian trucking associations, which had already said a large number of protesters in Ottawa appeared to have no connection to the trucking industry.

“The Tomb of the Unknown Soldier and the National War Memorial are sacred sites for Canadians. The desecration of these sites was a disgusting act and is a dishonor to those soldiers who have given their lives for our country and those Canadian soldiers who continue to fight for our freedom today, “the CTA said in a statement.

It went on to call Terry Fox, the late athlete and cancer research activist, a “national hero.” The defacing of Fox’s monument was another insult to “the memory of one of the greatest Canadians in our history,” the federation said.

One photo retweeted by James Moore, Canada’s former Minister of Innovation, Science and Industry, showed the statue holding an upside-down Canadian flag and a sign that read, “Mandate Freedom.” Ottawa Mayor Jim Watson called the display “completely unacceptable,” saying he’d asked for the sign and flag to be taken down. “This kind of stunt by protesters does not help their cause,” the mayor said.

Trucks and cars still lined the streets in Ottawa’s downtown core Sunday morning, and again, protesters showed no signs of leaving despite a frostbite warning with temperatures as low as -4 degrees Fahrenheit.

Ottawa police promised a “very large police presence” Sunday and said national monuments would be fortified and protected. Barricades were installed to “block any vehicular access to the path in front of the National War Memorial.”

“The OPS and our partners continue to focus on keeping peace in and around the demonstrations and maintaining emergency access lanes while addressing any threatening high-risk behavior,” Ottawa police said in a statement Sunday morning.