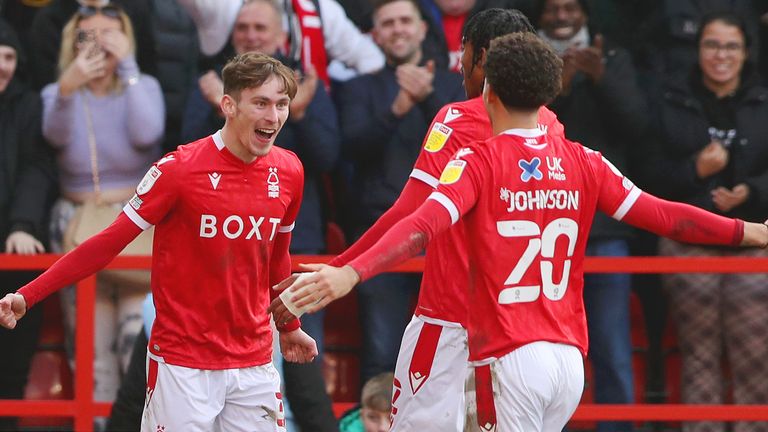 Johnson’s sixth goal in eight games sent Steve Cooper’s men into the interval ahead and Manchester United loanee Garner went on to wrap up matters with an early second-half strike, keeping Forest three points off the top six.

Defeat meant the visitors have now taken just two points from a possible 33 on the road and are without an away clean sheet in 22 contests – a sequence that stretches back to last March.

Forest got off to a blistering start with Robins goalkeeper Daniel Bentley called into two smart saves inside the first seven minutes.

First, he flew through the air to push Djed Spence’s curling edge-of-the-box effort behind after good work through the left channel by Keinan Davis.

Then, he dived low to his left to keep out Steve Cook’s overhead kick from a Philip Zinckernagel corner.

Nigel Pearson’s men, doing their best to slow the game down, managed their first attempt just past the quarter-hour mark when 16-goal top-scorer Andreas Weimann’s shot was deflected wide.

But Zinckernagel went on to bend wide of the far post at the other end and Johnson should have done better when he sidefooted wide from 12 yards after Davis had muscled his way past Joe Williams during another powerful charge down the left.

Johnson was then penalized for simulation when it looked like Cameron Pring, who had been cautioned earlier, might have tripped him in the box.

But the Nottingham-born 20-year-old shrugged off any frustration by opening the scoring in the 38th minute, beating Bentley from an unfavorable angle at his near post with a diagonal 12-yard, right-footed strike.

Bentley was back to his best on the stroke of half-time when he displayed excellent reflexes to repel a close-range Davis header.

But he was picking the ball out of his net again within 10 minutes of the restart when Garner’s precise side-footed effort found his bottom-right corner from the edge of the box after Scott McKenna and Max Lowe had combined well on the left flank.

Zinckernagel should have added a third when he intercepted Tomas Kalas’ woeful square pass to an unwitting Williams but he fired straight at Bentley and Garner also curled a late free-kick over.

It mattered little, though, against an away team that mustered just three shots all afternoon – the last hooked woefully over by Weimann as the board went up for added-on time.