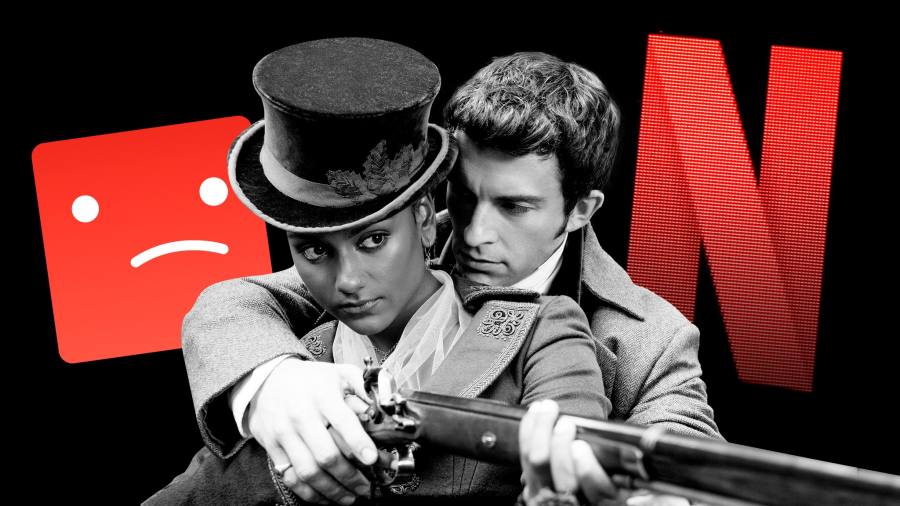 As he built Netflix into the world’s biggest streaming service, one of Reed Hastings’ management mantras was for his staff to “tell the emperor when he has no clothes”.

With Netflix losing almost two-thirds of its market value since November and analysts likening its fall to the dotcom crash, Hastings on Tuesday finally heeded his own advice and admitted that his corporate strategy might be seriously underdressed.

In the course of an hour on Tuesday, the Netflix founder and chief executive jettisoned his long-cherished principles, reorienting a media group that changed Hollywood to cope with leaner times of slow growth and spending restraint.

Sharing passwords? In 2016, Hastings quipped “we love people sharing Netflix”. Now, he plans to crack down on the practice; Hastings estimated 100mn people have been sharing accounts.

Competition? For years he has dismissed the threat of Disney, Apple and HBO, insisting Netflix’s biggest competitors were Fortnite, YouTube and “sleep”. On Tuesday he admitted Netflix needs to “take it up a notch” because its competitors have “some very good shows and movies out”.

But perhaps the clearest about-turn was on advertising. Having always defended Netflix as an advertising-free zone that allows viewers to “relax” without being “exploited”, Hastings flung open the doors to marketing money.

Casually dropping the change of strategy during a call with analysts, Hastings announced Netflix would work on a cheaper, advertising-backed version of its service “in the next year or two”.

And spending? Netflix single-handedly created a template for streaming in which the stock market rewarded it for spending more money. The company burned cash for years while investors applauded its fast subscriber growth and commitment to steadily churning out fresh TV shows and movies. For the first time, the company on Tuesday said it would curb its spending on content.

“It was shocking,” summarized Michael Nathanson, an analyst at MoffettNathanson. “These guys sounded like any other management team that just did not have the answers yet.”

The volte-face is a humbling moment for a company that while its subscriptions soared at the height of the pandemic was confident enough to start proactively canceling accounts for people who were not using them.

After a historic stock market run as one of the big tech ‘FAANG’ companies (Facebook, Apple, Amazon, Netflix and Google) soaring to a valuation of nearly $ 310bn in October, it has shrunk back to $ 95bn. Shares in Netflix plunged more than 38 percent on Wednesday alone.

“We have watched a company go from growth darling to growth purgatory in an instant,” said Nathanson.

One of the most painful decisions for Hastings may have been on advertising.

His rivals had long predicted Netflix would eventually buckle on an anti-advertising position that Jason Kilar, the former chief executive of Warner Media, recently compared to a “religion”. But few imagined it would come so soon.

“The way you get a billion [subscribers] is not by continuing to charge a premium price that’s ad-free, ”Kilar said. “[Netflix] will absolutely get to that conclusion. ”

Morgan Stanley expects that in the long term, Netflix can make “billions” from advertising, estimating that adverts generate about $ 3bn in revenue a year for rival service Hulu.

But the bank’s analysts also questioned whether the option to offer cheaper subscriptions would boost revenues for the company, given that it has already convinced 75mn households in the US and Canada to pay on average $ 15 a month. “If it migrates customers to an ad-supported tier at a lower price point, it can generate higher overall [revenue]? This is less clear. ”

Mark Read, chief executive of the WPP advertising group, said the change in strategy reflected the need to reach new customers and the clear “limits to growth of subscription-only models”.

“History has shown that successful media companies have both subscription and advertising,” he said. “No doubt the pressure on household budgets as well as the increasing number of subscription offers has focused consumer minds.”

The challenge for Netflix is ​​to introduce the ad-supported tier of membership without either eating into its existing subscriber base, or devoting too much time and money into building an advertising business that it once saw as a distraction.

After years as a market leader in video subscription services, Netflix must adjust to the role of latecomer in ad-funded streaming, learning from Disney, Discovery, Paramount and NBC. “There was never any fear that we’re in trouble,” said one former Netflix executive. “The feeling was: we are leap years ahead.”

It now faces stiff competition from the world’s largest media and technology companies, which have found success with blockbuster television shows such as Apple’s Ted Lasso and HBOs Succession.

Among some investors and analysts, there is a sense that Netflix’s lavish spending should yield better programming. “If you spend $ 18bn on content, I would like to think that you can persuade people to join your streaming platform,” said a top-10 shareholder in Netflix.

But its share price crash is worrying for the entire entertainment industry, because the biggest US media groups have earmarked more than $ 100bn for spending on content this year alone to try to emulate Netflix’s model.

Now, Hollywood is questioning whether Netflix executives seriously overestimated the size of the streaming market.

Netflix has 222mn paying subscribers, and Hastings has told investors that his “total addressable market” was any household in the world with access to the internet – potentially a billion subscribers. There was plenty of room to grow, and ample space for new competitors, he insisted.

But as its growth has ground to a halt, analysts are poking holes in these optimistic assumptions. Given questions of affordability and global access to digital payment systems, Nathanson estimates that the “real” addressable market is closer to 400mn.

Equally worrying, he questions whether Netflix has already reached full saturation in the US and Canada, where the company revealed on Tuesday that an additional 30mn people are sharing accounts on top of its existing 75mn subscribers. The number of US pay-TV subscribers during the peak of television in 2011 was about 100mn, indicating Netflix may have tapped out in its largest market.

This is bad news for other media groups because their valuations have been benchmarked on Netflix. Shares in Warner Bros. Discovery fell 5 percent on Wednesday, while Disney was down 4 percent and Paramount Global lost 10 percent.

Rich Greenfield, an analyst at Lightshed partners, noted the irony that streaming champions such as Netflix and Disney were now embracing advertising, a key pillar of old-media strategy, to revive their businesses.

“It is scary if the only way to reinvigorate growth is offering cheaper products that worsen the consumer experience, essentially making it more like the dying linear TV experience,” he said.

People walk near a Kohl's department store entranceway on June 07, 2022 in Doral, Florida. Kohl's announced that it has entered into exclusive negotiations with Franchise Group, which is proposing to buy the retailer for $ 60 per share. Joe...

\A sign is posted in front of a McDonald's restaurant on April 28, 2022 in San Leandro, California.Justin Sullivan | Getty ImagesMcDonald's is expected to report its second-quarter earnings before the bell on Tuesday.Here's what Wall Street analysts surveyed by...