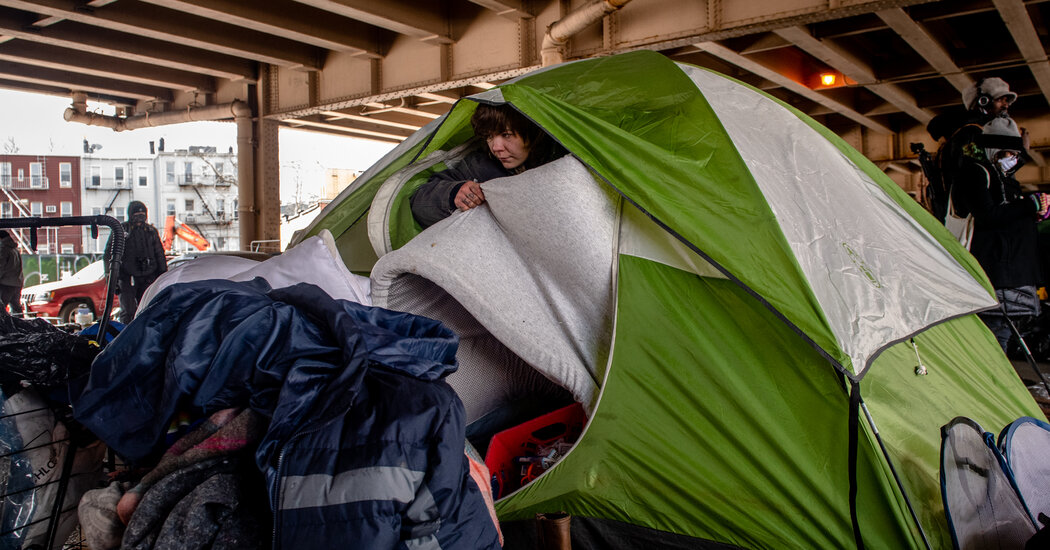 He also said that he believed Mr. Adams’ plan to tackle subway safety would help alleviate “the climate of fear that is affecting a lot of people who work in Manhattan and stopping some people from coming back to the office.”

Mr. Adams’ presentation included many visuals. One was a photo showing dozens of needles and syringes and other drug paraphernalia – part of a haul of more than 500 needles across four campsites that city officials said were collected under the Brooklyn-Queens Expressway.

He also displayed a brochure that will be handed out to people on the streets and subways that shows a tidy bed and a sparkling bathroom beneath the words, “Do you need a place to sleep tonight?”

While it is difficult to accurately count the number of people living unsheltered, the city’s most recent estimate, conducted in January 2021, tallied about 1,300 people sleeping in subways and about 1,100 on the streets. Many advocates consider the estimate to be an undercount.

The vast majority of the city’s approximately 50,000 homeless people live in shelters – about 30,000 in family shelters, and about 18,000 in shelters for single adults.

Transit officials have stressed that the subway is not intended for public shelter and have said that the number of people seeking refuge there raises concerns among some riders and interferes with daily operations.

At a news conference on Wednesday, Janno Lieber, the chairman of the Metropolitan Transportation Authority, which runs the subway system, commended the steps being taken to steer homeless people off trains. But he also acknowledged that some of those being referred to services were likely to return to public transit.

“There will be some folks who, God willing, get out of the situation they’re in a permanent way, and being realistic, there will be others that do not,” Mr. Lieber said. “It’s just too early to say what those percentages are and whether we’re actually making a dent in this situation.”