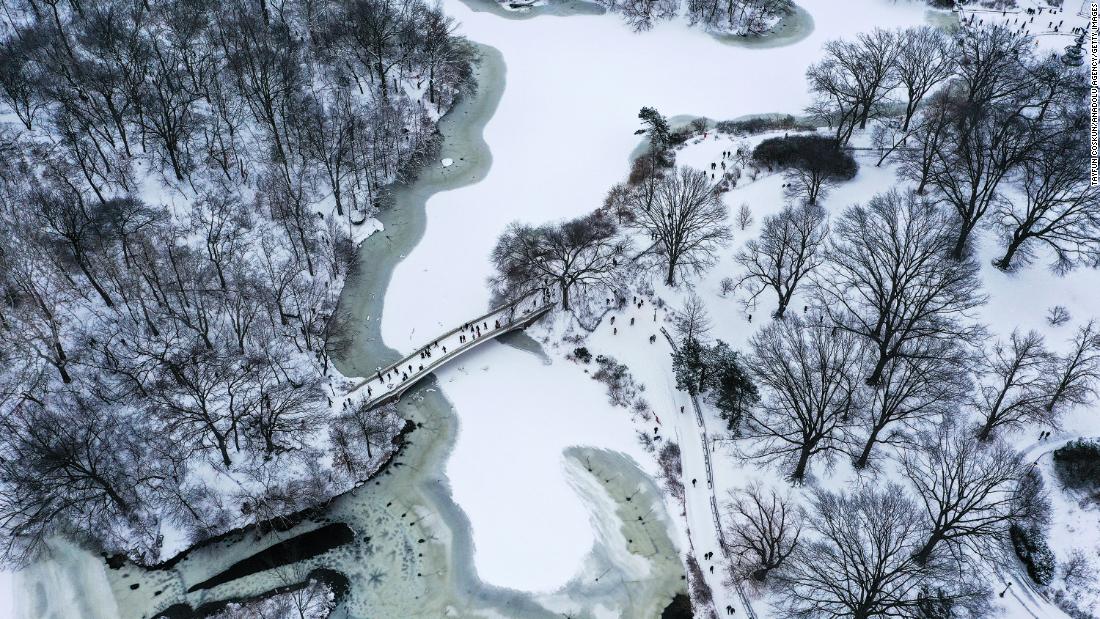 Winds behind the nor’easter could gust as high as 40 mph in some locations this morning.

“These strong winds, combined with the cold air temperatures will cause wind chills (or the” feels like “temperature) to be as cold as 10 to 20 degrees below zero,” CNN meteorologist Haley Brink said Sunday.

Afternoon high temperatures will remain below average across the Northeast on Sunday, with most locations struggling to get above 30 degrees.

Much of the Northeast can expect “dangerous” wind chills, some dipping below zero Sunday morning as the storm exits the region, the NWS warned.

About a million people across the Northeast were under winter weather alerts early Sunday, down from the nearly 16 million who were affected by such alerts Saturday night.

“That is a huge drop-off as the storm exits the most populous areas of the eastern seaboard,” CNN meteorologist Derek Van Dam said.

A blizzard, as defined by the NWS, requires blowing or falling snow, winds of at least 35 miles per hour, and visibility of a quarter mile or less for at least three hours.

Wind speed – which reached more than 80 mph Saturday across eastern Massachusetts – is expected to ease to about 15-25 mph Sunday, though gusts could be higher in some local areas, according to Van Dam.

Meanwhile, cities including New York, Boston and Philadelphia will see a slight dip of about 4 degrees Sunday.

“Although temperatures are going to rebound (Sunday), we will have to be patient for any real warm up, which does not come until the middle of the week,” Van Dam said.

The frigid cold follows dense snowfall that broke records throughout the Northeast in parts of southern New Jersey, New York, Pennsylvania and Massachusetts.

The storm became a “bomb cyclone” Saturday morning, meaning it strengthened rapidly and had the barometric pressure drop more than 24 millibars within 24 hours, the Weather Prediction Center said.

The storm wreaked havoc on transportation in the region, creating dangerous conditions on roadways and delays and cancellations on air and rail travel.

More than 3,580 flights within, into or out of the US were canceled Saturday, according to FlightAware, and more than a thousand were already canceled for Sunday as of the early morning. Major airlines offered waivers and alternative options to passengers whose travel was affected by the storm.

The bomb cyclone brought heavy snow that accumulated quickly as howling winds blew through the region.

The town of Stoughton, Massachusetts, recorded a staggering 30.9 inches of snowfall by Saturday night, the NWS said. And winds in parts of Barnstable County, Massachusetts, where Cape Cod is located, reached 81 mph Saturday, the service said.

Here are some notable snowfall records:

Freezing temps and no electricity

At least 60,861 Massachusetts customers are still without power Sunday morning, according to the Massachusetts Emergency Management Agency (MEMA).

That’s down from more than 88,000 outages Saturday evening, according to PowerOutage.us.

Most of Massachusetts’ remaining outages are on Cape Cod and along the southern coastline, according to MEMA’s map.

High winds and snow pushed over several trees across Nantucket Island while some areas were out of power because of downed wires, Iceland Fire Chief Stephen Murphy told CNN Saturday afternoon. Several roadways were also closed because of flooding, the chief said.

“We do have coastal flooding when we get these kinds of storms, but today was pretty intense,” Jason Graziadei, an editor at the local newsletter Nantucket Current, told CNN. “People (are) kind of just craving down out here.”

In the coastal Massachusetts town of Marshfield, town administrator Michael A. Maresco about 4 feet of water came over the seawall at high tide Saturday.