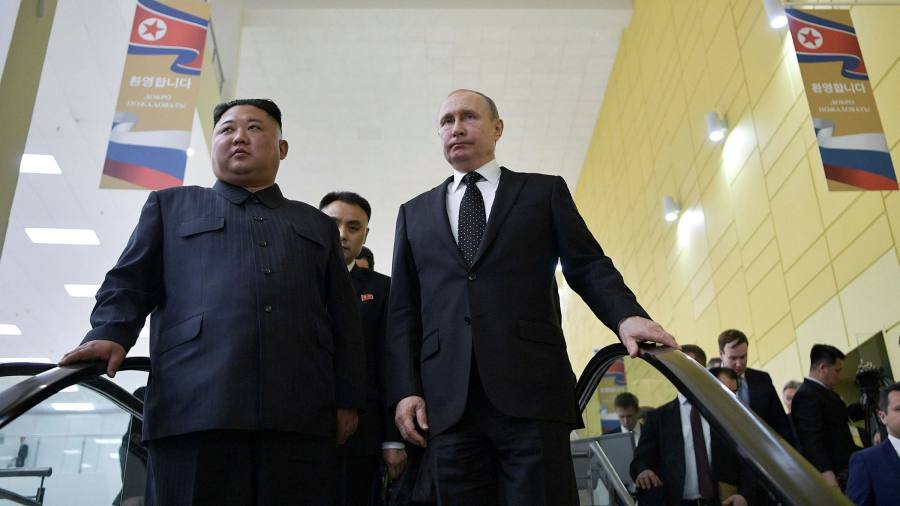 In September 2020, a Hong Kong-registered company transferred ownership of a ship, which had disappeared from maritime tracking data bases the previous month, to the Pyongyang-based Su Ryong San Shipping Co Ltd.

According to UN monitors, the Chinese-owned company imported up to 200,000 tonnes of sanctioned North Korean coal, which it bartered with a Chinese furniture company in exchange for two shipments of fertilizer to North Korea.

The operations of the network illustrate the ambiguous role played by China and Russia. Both countries are nominally committed to UN sanctions against Pyongyang, even as they turn a blind eye to the shadowy practices that keep the North Korean regime afloat.

Now, with Russia under intense pressure from western sanctions over its invasion of Ukraine, analysts are assessing what the North Korean example can teach western policymakers – not least China’s role in alleviating economic pressure on Moscow.

“North Korea is instructive in lots of ways, not least that it survives because it has externalized lots of its economy to Russia and China,” said James Byrne of the Royal United Services Institute in London.

In 2017, the US Treasury imposed sanctions on Bank of Dandong, a small Chinese bank that had assets of $ 10.66bn, accusing it of facilitating millions of dollars in transactions for companies involved in North Korea’s weapons program.

Zongyuan Liu, a fellow at the Council on Foreign Relations in New York, said that Russia could take advantage of Chinese “burner banks”, which facilitate illegal transactions but are then liquidated or reconstituted before their activities are discovered.

“This is an established model, and it is already used by North Korea and the Iranians,” said Liu. “But the volumes involved with Russia are so large that it will be very difficult to move the money before you get caught up in US sanctions.”

In return, “China could have more leverage over Russia in negotiating oil and gas deals, meaning it could buy Russian oil and gas at heavy discounts,” said Liu.

She added that China had lifted restrictions on Russian wheat and barley imports in February, just before Russia’s invasion of Ukraine.

Tom Keatinge, director of the Center for Financial Crime and Security Studies at the RUSI, said that Chinese banks were already weighing up the risk of processing Russia-linked transactions on a case-by-case basis.

“Transactions being rejected at the western branches of Chinese banks on compliance grounds then get processed in Shanghai if they are deemed to be strategically important for China,” he said.

“China could well become a clearing house for Russian transactions, and there are lots of interesting tricks that can be used – whether the Mexican ‘black peso market’ model for cross-border drug financing or the age-old hawala method of using brokers to facilitate transactions without money changing hands, ”said Keatinge.

But Aaron Arnold, a counter-proliferation expert who has served both in the US government and on the UN panel monitoring North Korean sanctions violations, noted Iran’s unhappy experience of attempting a “bartering system with China that was basically oil for goods”.

“Iran soon found itself awash in Chinese goods that it neither needed nor wanted,” said Arnold. “Displacing economic activity to China may alleviate some sectors, but not the economy in its entirety.”

North Korea’s destitution – its real gross domestic product was just $ 27.4bn in 2020, compared to Russia’s GDP of almost $ 1.5tn – means that sanctions-busting schemes that bring in even tens of millions of dollars or less can make a meaningful difference to a regime focused solely on survival and self-enrichment.

Allegations contained in the UN’s most recent report on North Korean sanctions violations included a Taiwanese shipping agency helping Pyongyang import tens of thousands of tons of oil, a North Korean spy running hotels and casinos in Cambodia, a plan to set up a factory producing arms and narcotics in Uganda and schemes for importing luxury cars and even a grand piano.

As with Russia, North Korea has a formidable cybercriminal capability. The US Treasury last week linked North Korean hackers to a $ 615mn crypto heist from players of Axie Infinity, a popular online game.

But Liu said a far bigger threat to the west than individual criminal operations was Russia, China and other like-minded countries accelerating efforts to construct parallel financial systems of their own. North Korea, she added, would be a “major beneficiary” of an “alliance of sanctions evaders”.

Liu cited Russian finance minister Anton Siluanov’s call this month for the Brics group of Brazil, Russia, India, China and South Africa to extend the use of national currencies and integrate their payment systems.

Several experts have linked the fate of the North Korean sanctions regime to that of the fracturing global order.

Last month, Russia’s deputy foreign minister met with the North Korean ambassador to Moscow to discuss improving bilateral relations “in the context of changes happening on the international arena”.

Stephanie Kleine-Ahlbrandt, a non-resident fellow at the Stimson Center think-tank in Washington, said: “I would expect to see greater sanctions violations by Russia and China, as well as an uptick in co-operative efforts, particularly at the multilateral level, to weaken the sanctions regimes on North Korea and other countries. ”