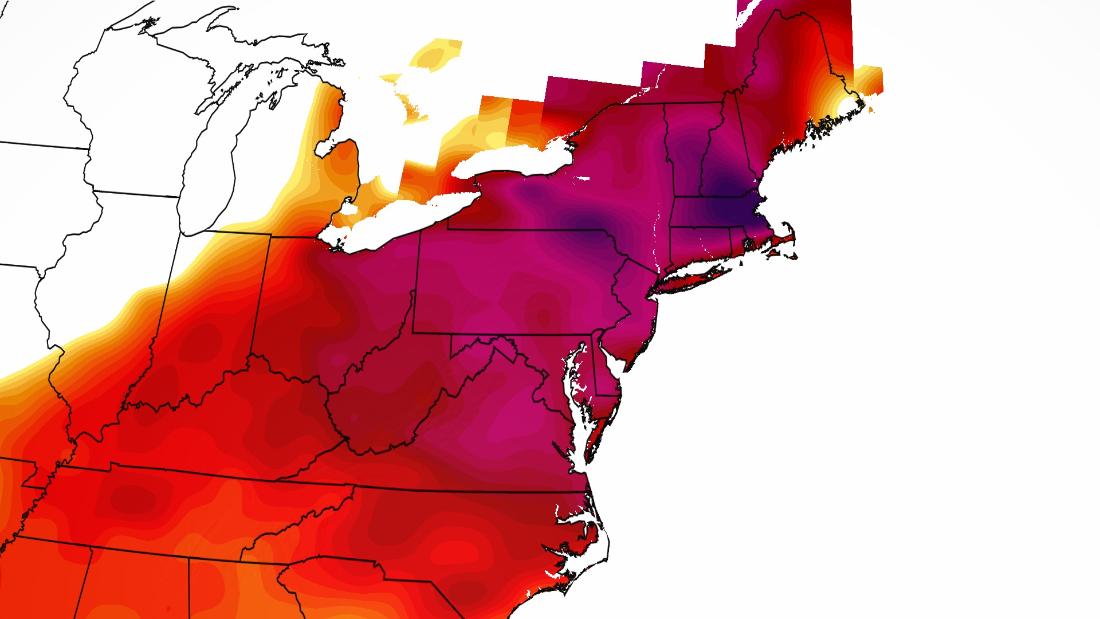 Afternoon temperatures could climb into the 90s around the region, with heat index values ​​up to 100 degrees possible, said CNN meteorologist Haley Brink. Sunday, however, is set to be the last day of extreme heat for a while as a cold front is expected to push into the region this evening, bringing strong to severe storms and cooler temperatures.

The National Weather Service has forecast Boston could see a high temperature of 96 degrees Sunday. The daily record high for the day is 93 degrees, while the monthly record for May is 97 degrees, set back on May 26, 1880.

Boston records are kept at Logan International Airport, which is right on the ocean, so those temperatures tend to be milder than the temperatures farther inland. And if the sea-breeze sets up in the right direction, it could prevent temperatures at the airport from reaching records.

In Worcester, Massachusetts, the daily record highs for Saturday and Sunday are 88 and 90 degrees respectively. The city tied the record Saturday at 88, and could surpass 90 on Sunday.

The early season heat wave this weekend is all thanks to a high pressure off the Eastern Seaboard resulting in southerly winds pushing hot and humid air across the Northeast – bringing temperatures 20 to 30 degrees above normal for this time of year.

Records were also set in Richmond, Virginia, Saturday at 95 degrees and Hagerstown, Maryland, at 91 degrees, and records were tied in Philadelphia and at Dulles International Airport at 95 and 92 degrees respectively, according to weather service data.

Half the population feeling the heat

Nearly 170 million people, roughly 52% of the population of the Lower 48, were expected to feel 90-degree heat over the weekend.

“Over half of the US population will see temperatures at or above 90 degrees this weekend, and it’s only May,” said CNN meteorologist Pedram Javaheri.

For some areas, it is not just the heat, but also the humidity bringing “feels-like” temperatures in the triple digits.

“Since many outdoor events are planned this weekend in the region, be aware of the heat, and take extra precautions if you work or spend time outside this weekend,” said the weather service office in Baltimore / Washington.

Heat is the number one killer

Even though the calendar may not show it is summer yet, Mother Nature has other plans, so it is important to be aware of the health dangers associated with this heat wave. For example, do not ever leave children or animals in a hot car. Ever.

“Since this is going to be the first heat wave of the year, it’s important to be really cognizant of making sure you’re aware of any heat illness or heatstroke-related symptoms and being especially cautious of them and having extra water on hand to combat that and the importance of shade, “said Aaron Swiggett, a meteorologist at the weather service office in Raleigh, North Carolina.

Swiggett also pointed out the forecast temperatures are actually for the shade, not in direct sunlight. So keep in mind your forecast high temperature is actually going to feel even hotter in the direct sun.

“Heat is a very sneaky killer,” said Chesnea Skeen, a meteorologist at the weather service office in Baltimore / DC. “A lot of people do not see it as a huge threat, but it’s actually one of the biggest killers as far as extreme weather goes.”

Skeen emphasized the importance of taking the heat seriously.

“Make sure you’re getting hydrated, staying in the shade, getting out of the sun whenever possible,” said Skeen. “And keeping an eye on folks in your life that are more susceptible to heat, such as young and the elderly and those that might be compromised.”

The good news is the heat wave will be short-lived. Once the cold front moves through the Eastern Seaboard on Monday, temperatures will drop back into the 60s and 70s for the Northeast and Mid-Atlantic.